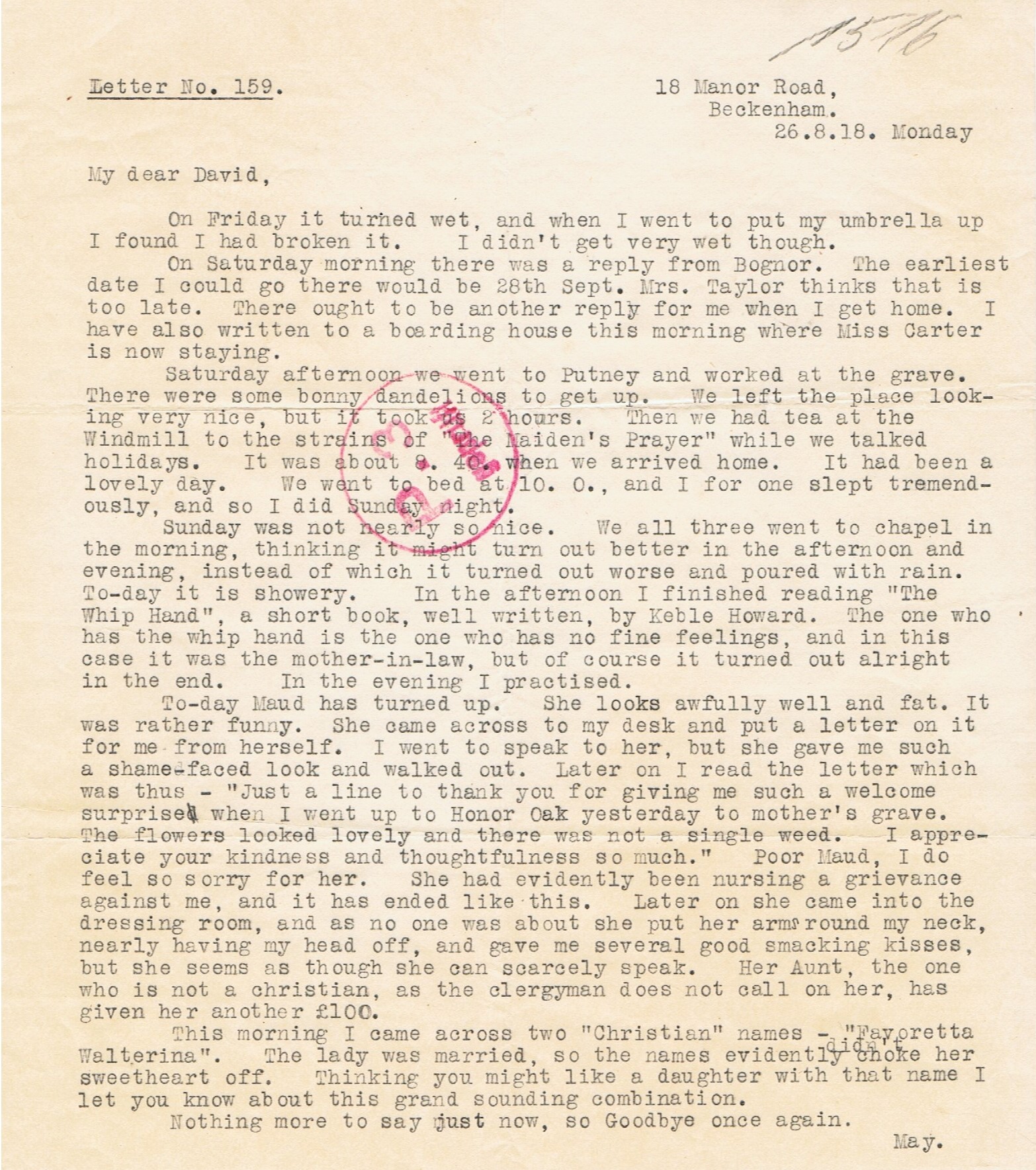 May to David Beckenham Letter No 159 26.8.18
My dear David,
On Friday it turned wet, and when I went to put my umbrella up I found I had broken it. I didn’t get very wet though.
On Saturday morning there was a reply from Bognor. The earliest date I could go there would be 28th Sept. Mrs Taylor thinks that is too late. There ought to be another reply for me when I get home. I have also written to a boarding house this morning where Miss Carter is now staying.
Saturday afternoon we went to Putney and worked at the grave. There were some bonny dandelions to get up. We left the place looking very nice, but it took us 2 hours. Then we had tea at the Windmill to the strains of “The Maiden’s Prayer” while we talked holidays. It was about 8.40 when we arrived home. It had been a lovely day. We went to bed at 10.0, and I for one slept tremendously, and so I did Sunday night.
Sunday was not nearly so nice. We all three went to chapel in the morning, thinking it might turn out better in the afternoon and evening, instead of which it turned out worse and poured with rain. To-day it is showery. In the afternoon I finished reading “The Whip Hand”, a short book, well written, by Keble Howard. The one who has the whip hand is the one who has no fine feelings, and in this case it was the mother-in-law, but of course it turned out alright in the end. In the evening I practiced.
To-day Maud turned up. She looks awfully well and fat. It was rather funny. She came across to my desk and put a letter on it for me from herself. I went to speak to her, but she gave me such a shame-faced look and walked out. Later on I read the letter which was thus – “Just a line to thank you for giving me such a welcome surprise when I went up to Honor Oak yesterday to mother’s grave. The flowers looked lovely and there was not a single weed. I appreciate your kindness and thoughtfulness so much.” Poor Maud, I do feel sorry for her. She had evidently been nursing a grievance against me, and it has ended like this. Later on she came into the dressing room, and as no one was about she put her arms around my neck, nearly having my head off, and gave me several good smacking kisses, but she seems as though she can scarcely speak. Her Aunt, the one who is not a Christian, as the clergyman does not call on her, has given her another £100.
This morning I came across two “Christian” names – “Favoretta Walterina”. The lady was married, so the names evidently didn’t choke her sweetheart off. Thinking you might like a daughter with that name I let you know about this grand sounding combination.
Nothing more to say just now, so Goodbye once again.
May