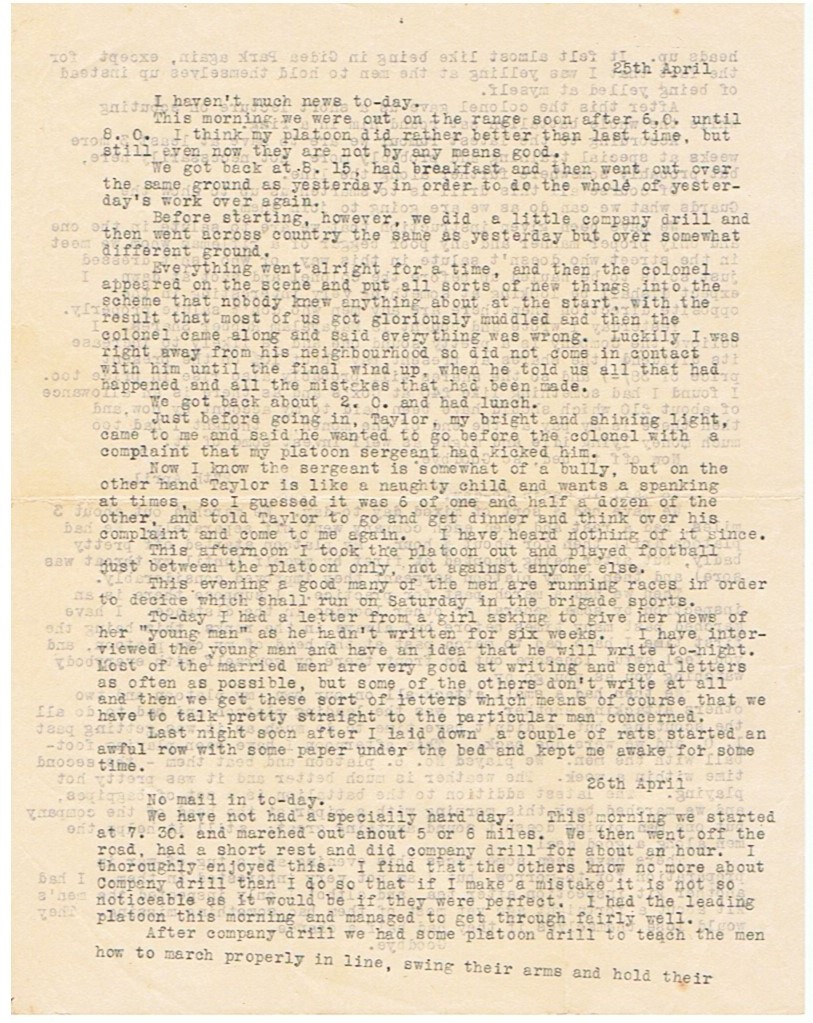 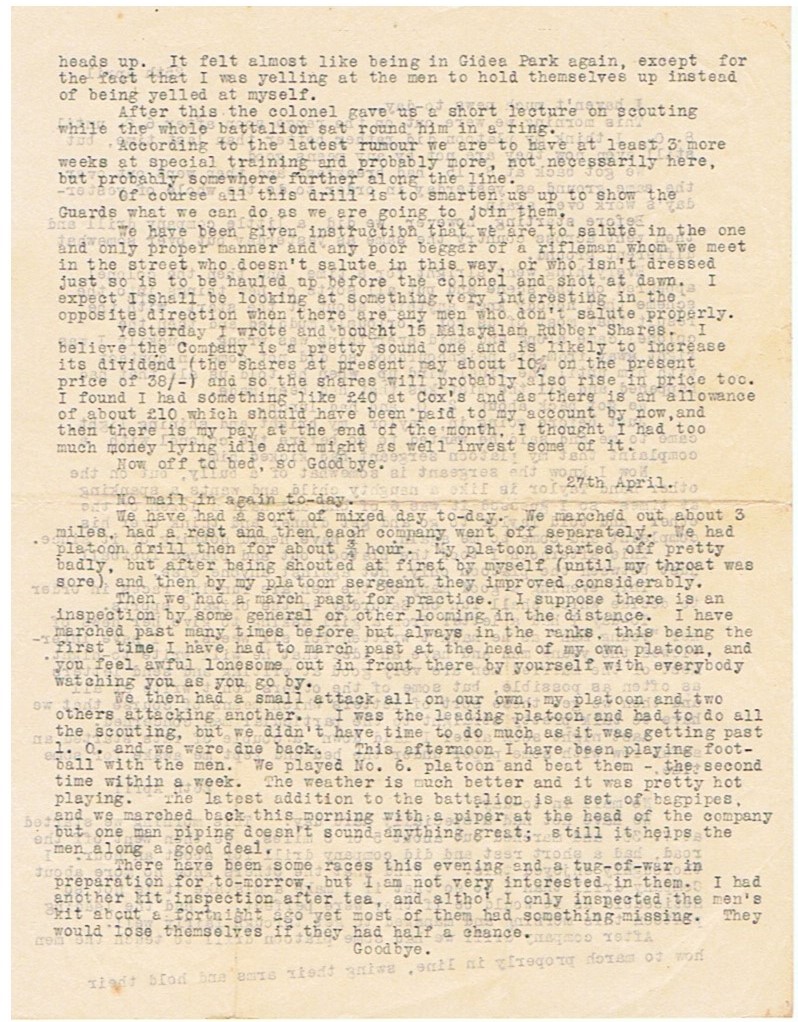 I haven’t much news today.

This morning we were out on the range soon after 6.0. until 8.0. I think my platoon did rather better than last time, but still even now they are not by any means good.

We got back at 8.15, had breakfast and then went out over the same ground as yesterday in order to do the whole of yesterday’s work over again.

Before starting, however, we did a little company drill and then went across country the same as yesterday but over somewhat different ground.

Everything went alright for a time, and then the colonel appeared on the scene and put all sorts of new things into the scheme that nobody knew anything about at the start, with the result that most of us got gloriously muddled and then the colonel came along and said everything was wrong. Luckily I was right away from his neighbourhood so did not come in contact with him until the final wind up, when he told us all that had happened and all the mistakes that had been made.

Just before going in, Taylor, my bright and shining light, came to me and said he wanted to go before the colonel with a complaint that my platoon sergeant had kicked him.

Now I know that the sergeant is somewhat of a bully, but on the other hand Taylor is like a naughty child and wants a spanking at times, so I guessed it was 6 of one and half a dozen of the other, and told Taylor to go and get dinner and think over his complaint and come to me again. I have heard nothing of it since.

This afternoon I took the platoon out and played football just between the platoon only, not against anyone else.

This evening a good many of the men are running races in order to decide which will run on Saturday in the brigade sports.

Today I had a letter from a girl asking to give her news of her “young man” as he hadn’t written for six weeks. I have interviewed the young man and have an idea that he will write tonight. Most of the married men are very good at writing and send letters as often as possible, but some of the others don’t write at all and then we get these sort of letters which means of course that we have to talk pretty straight to the particular man concerned.

Last night soon after I laid down a couple of rats started an awful row with some paper under the bed and kept me awake for some time.

No mail in today.

We have not had a specially hard day. This morning we started at 7.30 and marched out about 5 or 6 miles. We then went off the road, and had a short rest and did company drill for about an hour. I thoroughly enjoyed this. I find that the others know no more about Company drill than I do so that if I make a mistake it is not so noticeable as it would be if they were perfect. I had the leading platoon this morning and managed to get through fairly well.

After company drill we had some platoon drill to teach the men heads up. It felt almost like being in Gidea Park again, except for the fact that I was yelling at the men to hold themselves up instead of being yelled at myself.

After this the colonel gave us a short lecture on scouting while the whole battalion sat round him in a ring.

According to the latest rumour we are to have at least 3 more weeks at special training and probably more, not necessarily here, but probably somewhere further along the line.

Of course all this drill is to smarten us up to show the Guards what we can do as we are going to join them.

We have been given instruction that we are to salute in the one and only proper manner and any poor beggar of a rifleman whom we meet in the street in this way, or who isn’t dressed just so is to be hauled up before the colonel and shot at dawn. I expect I shall be looking at something very interesting in the opposite direction when there are any men who don’t salute properly.

Yesterday I wrote and bought 15 Malayalam Rubber Shares. I believe the Company is a pretty sound one and is likely to increase its dividend (the shares at present pay about 10% on the present price of 38/-) and so the shares will probably also rise in price too. I found I had something like £40 at Cox’s and as there is an allowance of about £10 which should have been paid to my account by now, and then there is my pay at the end of the month, I thought I had too much money lying idle and might as well invest some of it.

Now off to bed, so Goodbye.

No mail in again today.

We have had a sort of mixed day today. We marched out about 3 miles, had a rest and then each company went off separately. We had platoon drill then for about ¾ hour. My platoon started off pretty badly, but after being shouted at first by myself (until my throat was sore) and then by my platoon sergeant they improved considerably.

Then we had a march past for practice. I suppose there is an inspection by some general or other looming in the distance. I have marched past many times before but always in the ranks, this being the first time I have had to march past at the head of my own platoon, and you feel awful lonesome out in front there by yourself with everybody watching you as you go by.

We then had a small attack all on our own, my platoon and two others attacking another. I was the leading platoon and had to do all the scouting, but we didn’t have time to do much as it was getting past 1.0 and we were due back. This afternoon I have been playing football with the men. We played No.6 platoon and beat them – the second time within a week. The weather is much better and it was pretty hot playing. The latest addition to the battalion is a set of bagpipes, and we marched back this morning with a piper at the head of the company but one man piping doesn’t sound anything great; still it helps the men along a good deal.

There have been some races this evening and a tug-of-war in preparation for tomorrow, but I am not very interested in them. I had another kit inspection after tea, and altho’ I only inspected the men’s kit about a fortnight ago yet most of them had something missing. They would loose themselves if they had half a chance.