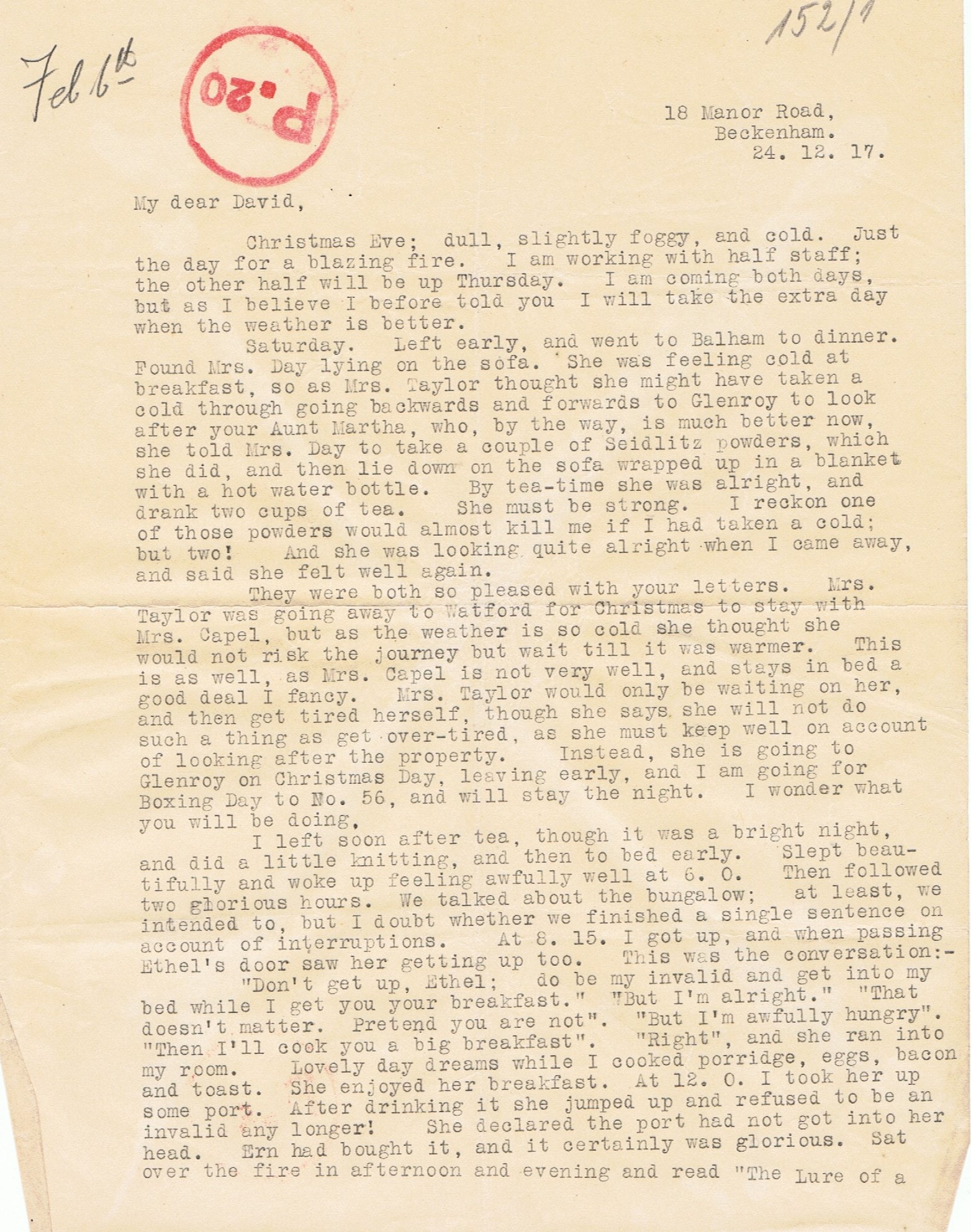 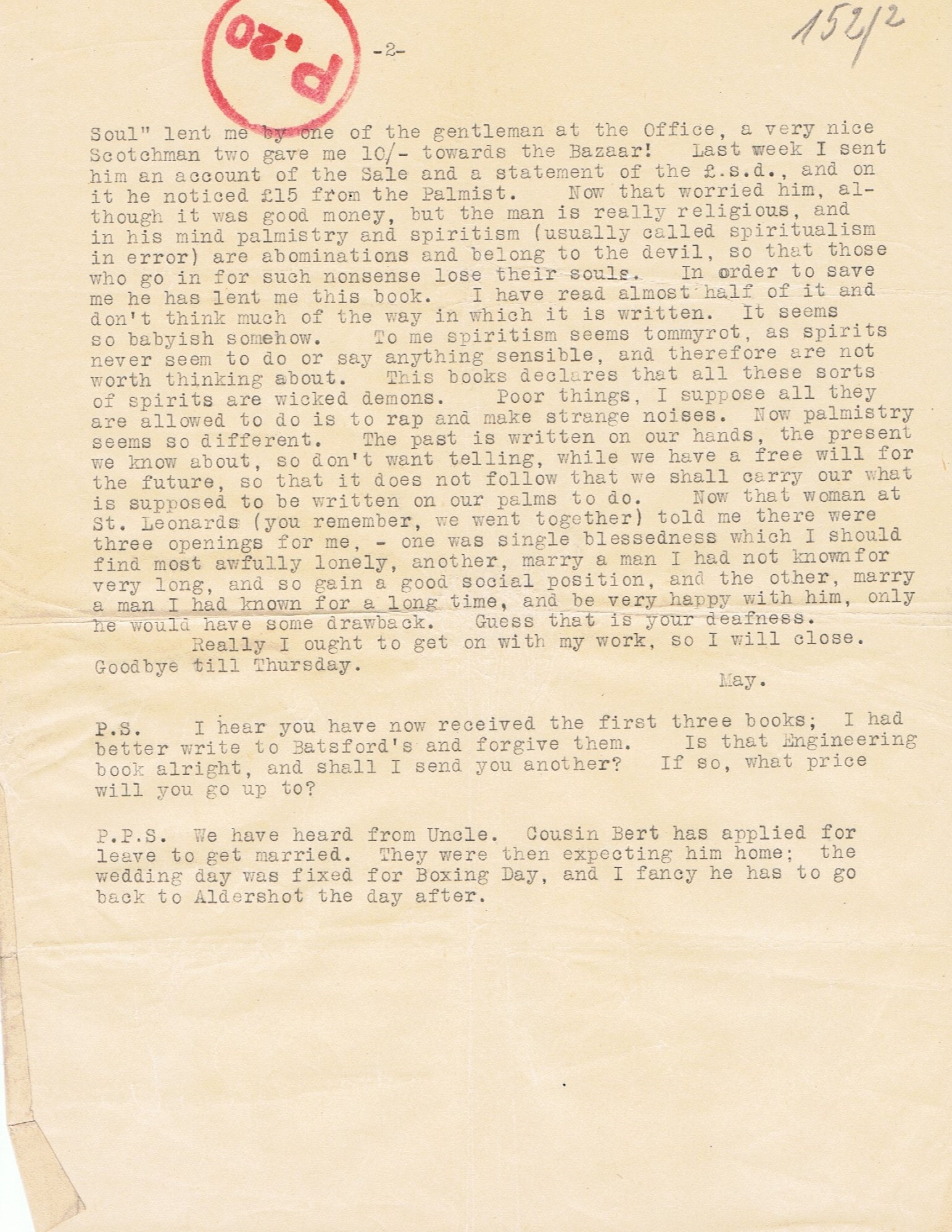 May to David Beckenham 24.12.17
My dear David,
Christmas Eve; dull, slightly foggy, and cold. Just the day for a blazing fire. I am working with half staff; the other half will be up Thursday. I am coming in both days, but as I believe I before told you I will take the extra day when the weather is better.
Saturday. Left early, and went to Balham to dinner. Found Mrs Day lying on the sofa. She was feeling cold at breakfast, so as Mrs Taylor thought she might have taken a cold through going backwards and forwards to Glenroy to look after your Aunt Martha, who, by the way, is much better now, she told Mrs Day to take a couple of Seidlitz powders, which she did, and then lie down on the sofa wrapped in a blanket with a hot water bottle. By tea-time she was alright, and drank two cups of tea. She must be strong. I reckon one of those powders would almost kill me if I had taken a cold; but two! And she was looking quite alright when I came away, and said she felt well again.
They were both so pleased with your letters. Mrs Taylor was going away to Watford for Christmas to stay with Mrs Capel, but as the weather is so cold she thought she would not risk the journey but wait till it was warmer. This is as well, as Mrs Capel is not very well, and stays in bed a good deal I fancy. Mrs Taylor would only be waiting on her, and then get tired herself, though she says she will not do such a thing as get over tired, as she must keep well on account of looking after the property. Instead, she is going to Glenroy on Christmas Day, leaving early, and I am going for Boxing Day to No. 56, and will stay the night. I wonder what you will be doing.
I left soon after tea, though it was a bright night, and did a little knitting, and then to bed early. Slept beautifully and woke up feeling awfully well at 6.0. Then followed two glorious hours. We talked about the bungalow; at least we intended to, but I doubt whether we finished a single sentence on account of interruptions. At 8.15 I got up, and when passing Ethel’s door saw her getting up too. This was the conversation:-
“Don’t get up, Ethel; do be my invalid and get into my bed while I get your breakfast.” “But I’m alright.” “That doesn’t matter. Pretend you are not.” “But I’m awfully hungry.” “Then I’ll cook you a big breakfast.” “Right”, and she ran into my room. Lovely day dreams while I cooked porridge, eggs, bacon and toast. She enjoyed her breakfast. At 12.0 I took her up some port. After drinking it she jumped up and refused to be an invalid any longer! She declared the port had not got into her head. Ern had bought it, and it certainly was glorious. Sat over the fire in afternoon and evening and read “The Lure of a Soul” lent me by one of the gentlemen at the Office, a very nice Scotchman who gave me 10/- towards the Bazaar! Last week I sent him an account of the Sale and a statement of the £.s.d., and on it he noticed £15 from the Palmist. Now that worried him, although it was good money, but the man is really religious, and in his mind palmistry and spiritism (usually called spiritualism in error) are abominations and belong to the devil, so that those who go in for such nonsense lose their souls. In order to save me he has lent me this book. I have read almost half of it and don’t think much of the way in which it is written. It seems so babyish somehow. To me spiritism seems tommyrot, as spirits never seem to do or say anything sensible, and therefore are not worth thinking about. This book declares that all these sorts of spirits are wicked demons. Poor things, I suppose all they are allowed to do is to rap and make strange noises. Now palmistry seems so different. The past is written on your hands, the present we know about, so don’t want telling, while we have a free will for the future, so that it does not follow that we shall carry our what is supposed to be written on our palms to do. Now that woman at St Leonards (you remember, we went together) told me there were three openings for me, – one was single blessedness which I should find most awfully lonely, another, marry a man I had not known for very long, and so gain a good social position, and the other, marry a man I had known for a long time, and be very happy with him, only he would have some drawback. Guess that is your deafness.
Really I ought to get on with my work, so I will close.
Goodbye till Thursday.
May
P.S. I hear you have now received the first three books; I had better write to Batsford’s and forgive them. Is tat Engineering book alright, and shall I send you another? If so, what price will you go up to?
P.P.S. We have heard from Uncle. Cousin Bert has applied for leave to get married. They were then expecting him home; the wedding day was fixed for Boxing Day, and I fancy he has to go back to Aldershot the day after.