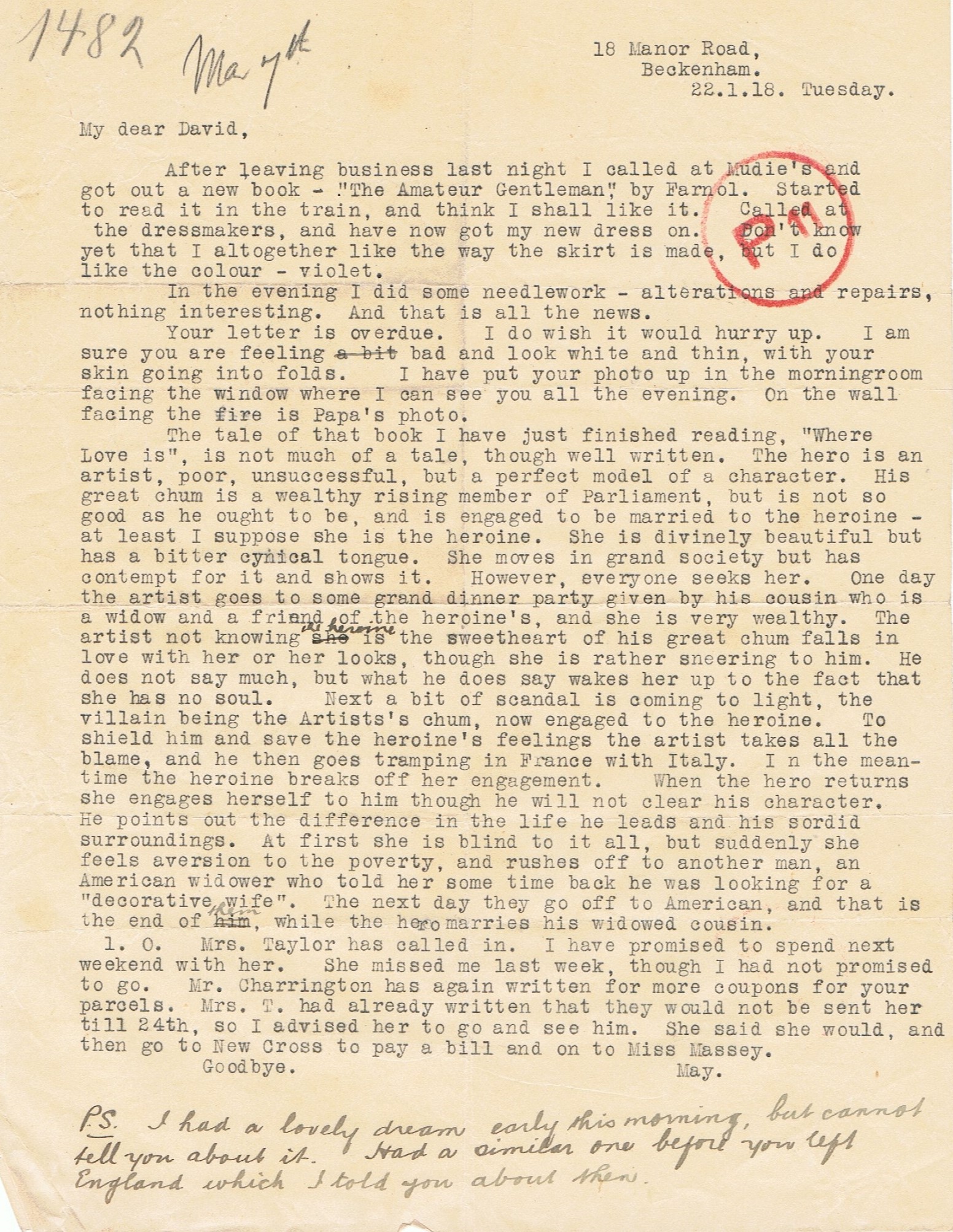 May to David Beckenham 22.1.18
My dear David,
After leaving business last night I called at Mudie’s and got out a new book – “The Amateur Gentleman” by Farnol. Started to read it in the train, and think I shall like it. Called at the dressmakers, and have now got my new dress on. Don’t know yet that I altogether like the way the skirt is made, but I do like the colour – violet.
In the evening I did some needlework – alterations and repairs, nothing interesting. And that is all the news.
Your letter is overdue. I do wish it would hurry up. I am sure you are feeling bad and look white and thin, with your skin going into folds. I have put your photo up in the morning room facing the window where I can see you all the evening. On the wall facing the fire is Papa’s photo.
The tale of that book I have just finished reading, “Where Love is”, is not much of a tale, though well written. The hero is an artist, poor, unsuccessful, but a perfect model of a character. His great chum is a wealthy rising member of Parliament, but is not so good as he ought to be, and is engaged to be married to the heroine – at least I suppose she is the heroine. She is divinely beautiful but has a bitter cynical tongue. She moves in grand society but has contempt for it and shows it. However, everyone seeks her. One day the artist goes to some grand dinner party given by his cousin who is a widow and a friend of the heroine’s, and she is very wealthy. The artist not knowing the heroine is the sweetheart of his great chum falls in love with her or her looks, though she is rather sneering to him. He does not say much, but what he does say wakes her up to the fact that she has no soul. Next a bit of scandal is coming to light, the villain being the Artist’s chum, now engaged to the heroine. To shield him and save the heroine’s feelings the artist takes all the blame, and he then goes tramping in France with Italy. In the meantime the heroine breaks off her engagement. When the hero returns she engages herself to him though he will not clear his character. He points out the difference in the life he leads and his sordid surroundings. At first she is blind to it all, but suddenly she feels aversion to the poverty, and rushes off to another man, an American widower who told her some time back he was looking for a “decorative wife”. The next day they go off to America, and that is the end of them, while the hero marries his widowed cousin.
1.0
Mrs Taylor has called in. I have promised to spend next weekend with her. She missed me last week, though I had not promised to go. Mr Charrington has again written for more coupons for your parcels. Mrs T had already written that they would not be sent her till 24th, so I advised her to go and see him. She said she would, and then go to New Cross to pay a bill and on to Miss Massey.
P.S. I had a lovely dream early this morning, but cannot tell you about it. Had a similar one before you left England which I told you about then.