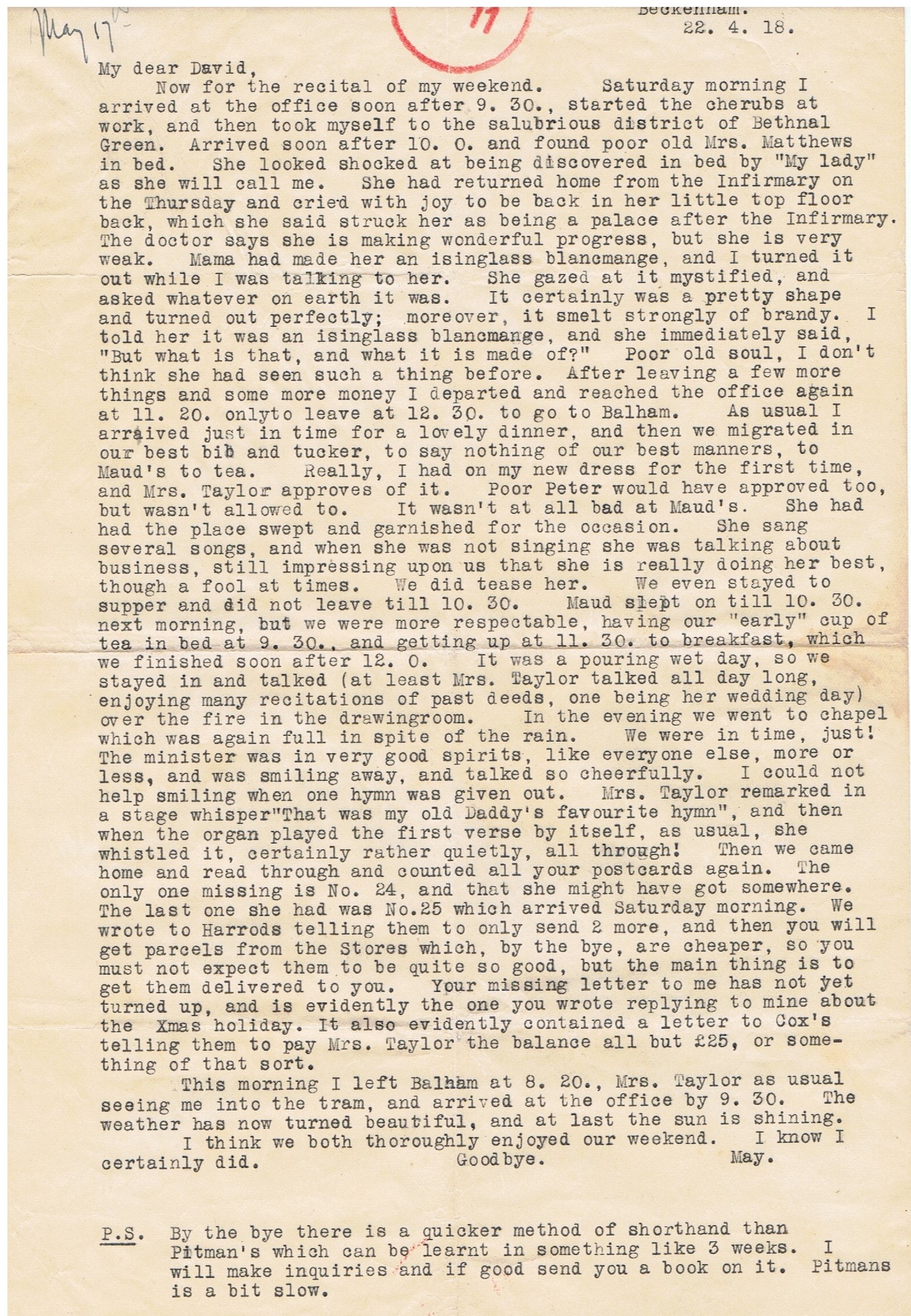 May to David 22.4.18 Letter No 107
Now for the recital of my weekend. Saturday morning I arrived at the office soon after 9.30, started the cherubs at work, and then took myself to the salubrious district of Bethnal Green. Arrived soon after 10.0 and found poor old Mrs Matthews in bed. She looked shocked at being discovered in bed by “My Lady” as she will call me. She had returned from the Infirmary on the Thursday and cried with jpy to be back in her little top floor back, which she said struck her as being a palace after the Infirmary. The doctor says she is making wonderful progress, but she is very weak. Mama made her an isinglass blancmange, and I turned it out while talking to her. She gazed at it mystified, and asked whatever on earth it was. It certainly was a pretty shape and turned out perfectly; moreover, it smelt strongly of brandy. I told her it was an isinglass blancmange, and she immediately said, “But what is that, and what is it made of?” Poor old soul, I don’t think she had seen such a thing before. After leaving a few more things and some more money I departed and reached the office again at 11.20 only to leave at 12.30 to go to Balham. As usual I arrived in time for a lovely dinner, and then we migrated in our best bib and tucker, to say nothing of our best manner, to Maud’s to tea. Really, I had on my new dress for the first time, and Mrs Taylor approves of it. Poor Peter would have approved too, but wasn’t allowed to. It wasn’t at all bad at Maud’s. She had had the place swept and garnished for the occasion. She sang several songs, and when she was not singing she was talking about business, still impressing upon us that she is really doing her best, though a fool at times. We did tease her. We eve stayed to supper and did not leave till 10.30. Maud slept on till 10.30 next morning, but we were more respectable, having our “early” cup of tea in bed at 9.30, and getting up at 11.30 to breakfast, which we finished soon after 12.0. It was a pouring wet day, so we stayed in and talked (at least Mrs Taylor talked all day long, enjoying many recitations of past deeds, one being her wedding day) over the fire in the drawing room. In the evening we went to chapel which was again full in spite of the rain. We were in time, just! The minister was in very good spirits, like everyone else, more or less, smiling away, and talked so cheerfully. I could not help smiling when one hymn was given out. Mrs Taylor remarked in a stage whisper “That was my old Daddy’s favourite hymn”, and then when the organ played the first verse by itself, as usual, she whistled it, certainly rather quietly, all through! Then we came home and read through and counted all your postcards again. The only one missing is No 24, and that she might have got somewhere. The last one she had was No 25 which arrived Saturday morning. We wrote to Harrods telling them to only send 2 more, and then you will get parcels from the Stores which, by the bye,, are cheaper, so you must not expect them to be quite so good, but the main thing is to get them delivered to you. Your missing letter to me has not yet turned up, and is evidently the one you wrote replying to mine about the Xmas holiday. It also evidently contained a letter to Cox’s telling them to pay Mrs Taylor the balance all but £25, or something of that sort.
This morning I left Balham at 8.20, Mrs Taylor as usual seeming me into the tram, and arrived at the office by 9.30. The weather has now turned beautiful, and at last the sun is shining.
I think we both thoroughly enjoyed our weekend. I know I certainly did.
Goodbye.
May
PS By the bye there is a quicker method of shorthand than Pitman’s which can be learnt in something like 3 weeks. I will make enquiries and if good send you a book on it. Pitmans is a bit slow.