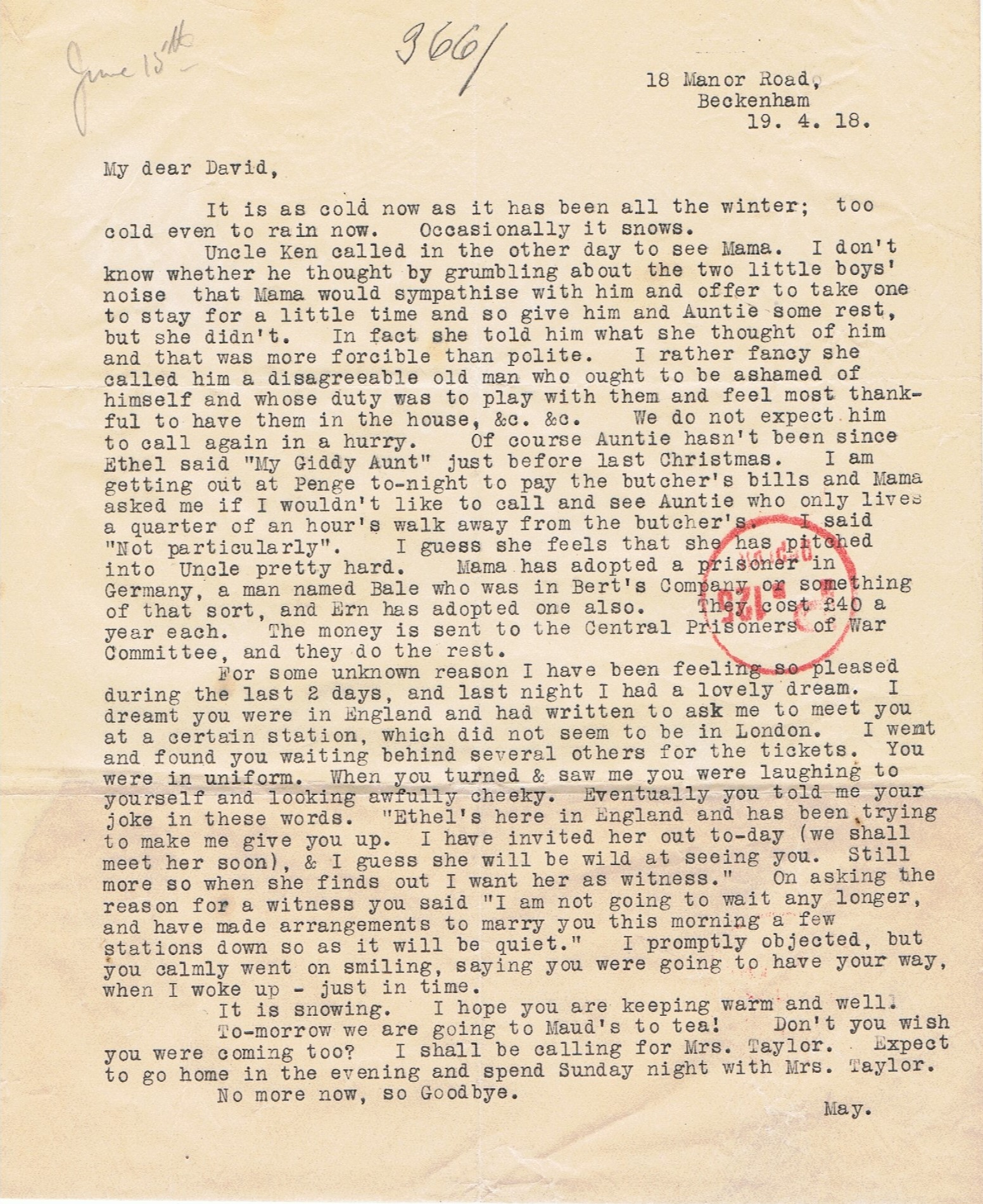 May to David Beckenham 19.4.18
It is as cold now as it has been all the winter; too cold even to rain now. Occasionally it snows.
Uncle Ken called in the other day to see Mama. I don’t know whether he thought by grumbling about the two little boys’ noise that Mama would sympathise with him and offer to take one to stay for a little time and so give him and Auntie some rest, but she didn’t. In fact she told him what she thought of him and that was more forceful than polite. I rather fancy she called him a disagreeable old man who ought to be ashamed of himself and whose duty was to play with them and feel most thankful to have them in the house, etc etc. We do not expect him to call again in a hurry. Of course Auntie hasn’t been since Ethel said “My Giddy Aunt” just before last Christmas. I am getting out at Penge tonight to pay the butcher’s bills and Mama asked me if I wouldn’t like to call and see Auntie who only lives a quarter of an hour’s walk away from the butcher’s. I said “Not particularly”. I guess she feels that she has pitched into Uncle pretty hard. Mama has adopted a prisoner in Germany, a man named Bale who was in Bert’s Company or something of that sort, and Ern has adopted one also. They cost £40 a year each. The money is sent to the Central Prisoners of War Committee, and they do the rest.
For some unknown reason I have been feeling so pleased during the last 2 days, and last night I had a lovely dream. I dreamt you were in England and had written to ask me to meet you at a certain station, which did not seem to be in London. I went and found you waiting behind several others for the tickets. You were in uniform. When you turned & saw me you were laughing to yourself and looking awfully cheeky. Eventually you told me your joke in these words. “Ethel’s here in England and has been trying to make me give you up. I have invited her out today (we shall meet her soon), & I guess she will be wild at seeing you. Still more so when she finds out I want her as witness.” On asking the reason for a witness you said “I am not going to wait any longer, and have made arrangements to marry you this morning a few stations down so as it will be quiet.” I promptly objected, but you calmly went on smiling, saying you were going to have your way, when I woke up – just in time.
It is snowing. I hope you are keeping warm and well.
Tomorrow we are going to Maud’s to tea! Don’t you wish you were coming too? I shall be calling for Mrs Taylor. Expect to go home in the evening and spend Sunday night with Mrs Taylor.
No more now, so goodbye.
May