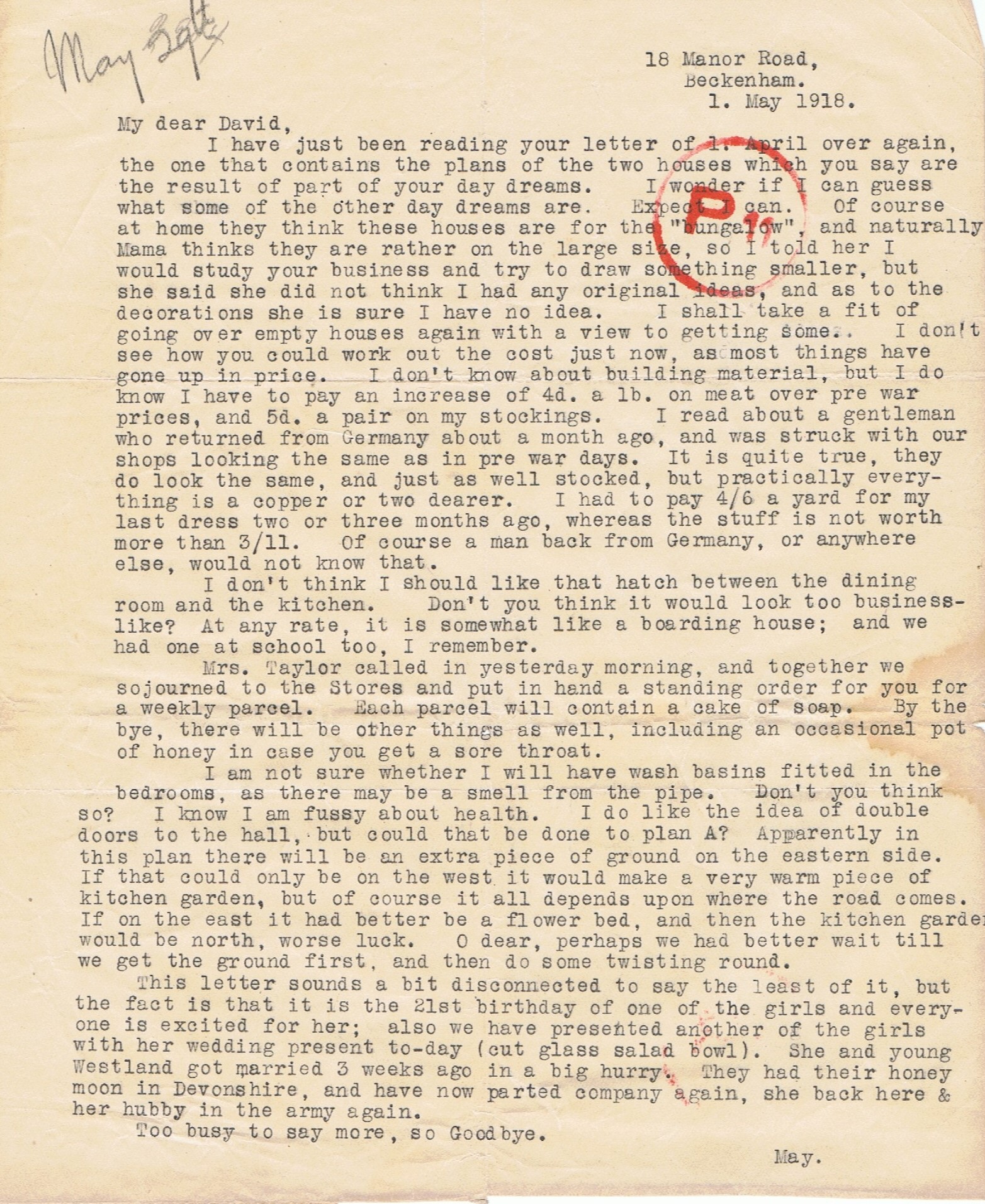 May to David Beckenham 1 May 1918
My dear David,
I have just been reading your letter of 1 April again, the one that contains the plans of the two houses which you say are the result of part of your day dreams. I wonder if I can guess what some of the other day dreams are. Expect I can. Of course at home they think these houses are for the “bungalow”, and naturally Mama thinks they are rather on the large size, so I told her I would study your business and try to draw something smaller, but she said she did not think I had any original ideas, and as to the decorations she is sure I have no idea. I shall take a fit of going over empty houses again with a view to getting some. I don’t how you could work out the cost just now, as most things have gone up in price. I don’t know about building material, but I do know I have to pay an increase of 4d a lb. on meat over pre war prices and 5d a pair on my stockings. I read about a gentleman who returned from Germany about a month ago, and was struck with our shops looking the same as in pre war days. It is quite true, they do look the same, and just as well stocked, but practically everything is a copper or two dearer. I had to pay 4/6 a yard for my last dress two or three months ago, whereas the stuff is not worth more than 3/11. Of course a man back from Germany, or anywhere else, would not know that.
I don’t think I would like a hatch between the dining room and the kitchen. Don’t you think it would look too businesslike? At any rate, it is somewhat like a boarding house; and we had one at school, I remember.
Mrs Taylor called in yesterday morning, and together we sojourned to the Stores and put in hand a standing order for you for a weekly parcel. Each parcel will contain a cake of soap. By the bye, there will be other things as well, including an occasional pot of honey in case you get a sore throat.
I am not sure whether I will have wash basins fitted in the bedrooms, as there may be a smell from the pipe. Don’t you think so? I know I am fussy about health. I do like the idea of double doors to the hall, but could that be done to plan A? Apparently in this plan there will be an extra piece of ground on the eastern side. If that could only be on the west it would make a nice warm piece of kitchen garden, but of course it all depends on where the road comes. If on the east it had better be a flower bed, and then the kitchen garden would be north, worse luck. Oh dear, perhaps we had better wait till we get the ground first, and then do some twisting round.
This letter sounds a bit disconnected to say the least of it, but the fact is that it is the 21st birthday of one of the girls and everyone is excited for her; also we have presented another of the girls with her wedding present today (cut glass salad bowl). She and young Westland got married 3 weeks ago in a big hurry. They had their honeymoon in Devonshire, and have now parted company again, she back here & her hubby in the army again.
Too busy to say more, so Goodbye.
May