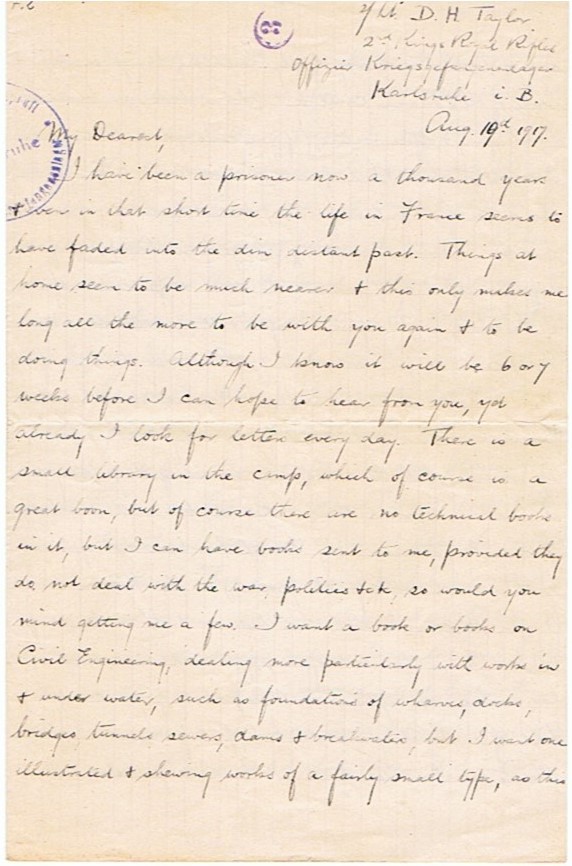 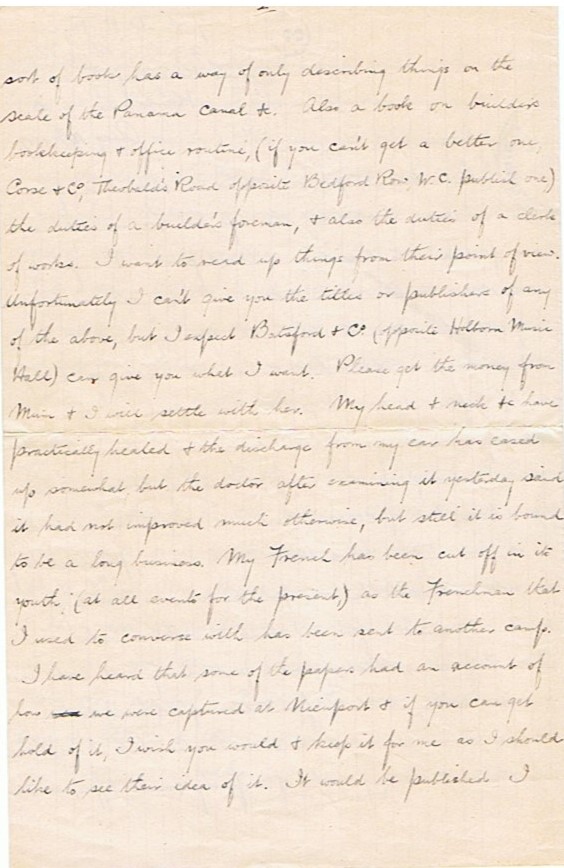 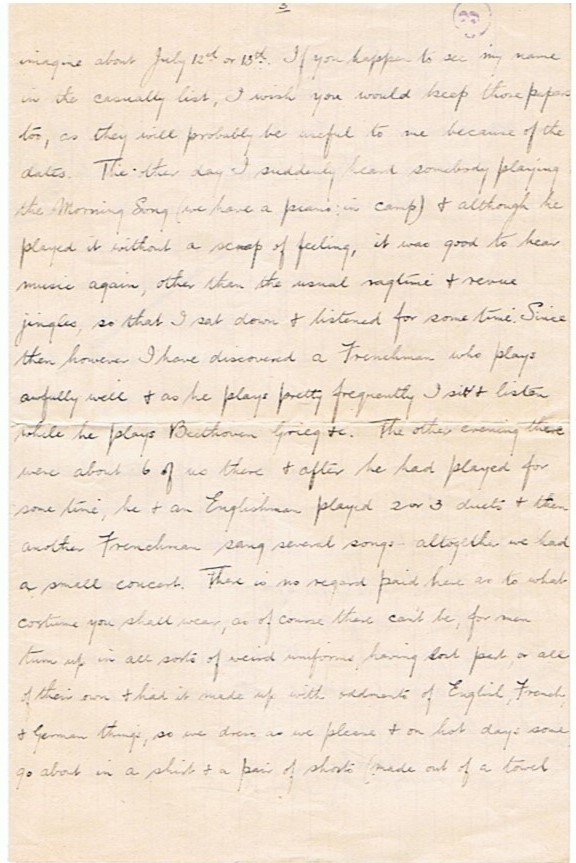 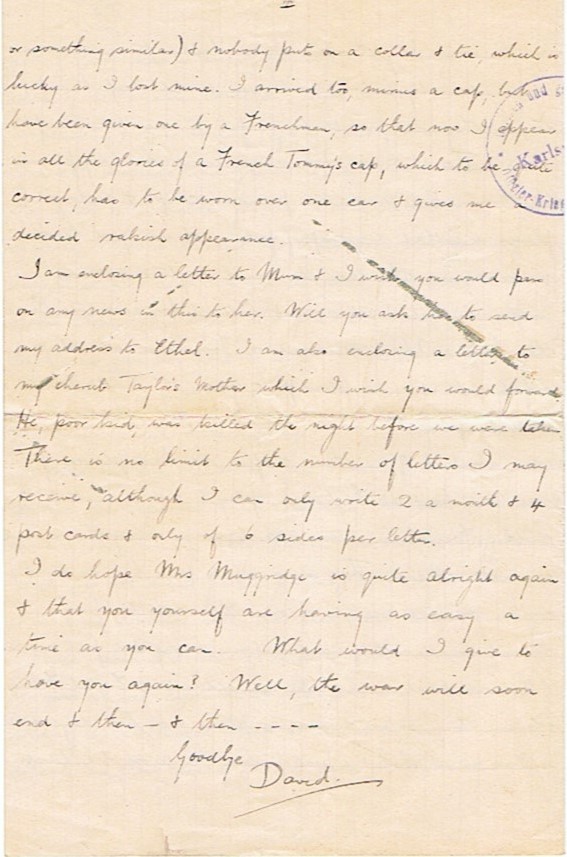 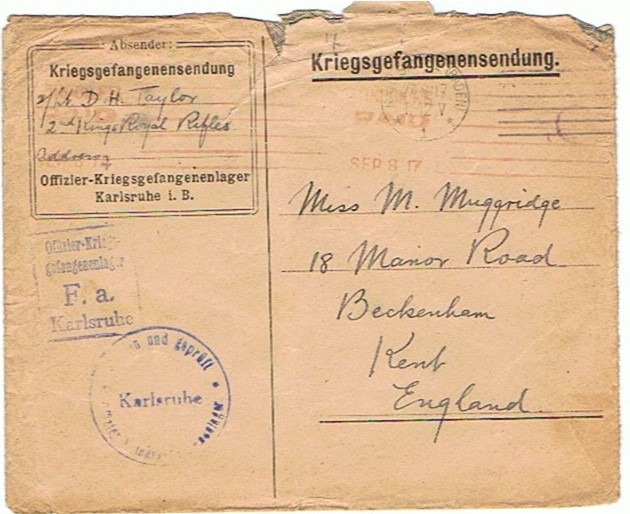 I have been a prisoner now a thousand years and even in that short time the life in France seems to have faded into the dim distant past. Things at home seem to be much nearer and this only makes me long all the more to be with you again and to be doing things. Although I know it will be 6 or 7 weeks before I can hope to hear from you, yet already I look for letters every day. There is a small library in the camp, which of course is a great boon, but of course there are no technical books in it, but I can have books sent to me, provided they do not deal with the war, politics etc. etc., so would you mind getting me a few. I want a book or books on Civil Engineering, dealing more particularly with works in and under water, such as foundations of wharves, docks, bridges, tunnels, sewers, dams and breakwaters, but I want one illustrated and showing works of a fairly small type, as this sort of book has a way of only describing things on the scale of the Panama Canal etc. Also a book on builder’s bookkeeping and office routine, (if you can’t get a better one Corse & Co., Theobald’s Road opposite Bedford Row, W.C. publish one)) the duties of a builder’s foreman, and also the duties of a clerk of works. I want to read up things from their point of view. Unfortunately I can’t give you the titles or publishers of any of the above, but I expect Batsford & Co. (opposite Holborn Music Hall) can give you what I want. Please get the money from Mum and I will settle with her.

My head and neck etc. have practically healed and the discharge from my ear has eased up somewhat but the doctor after examining it yesterday said it had not improved much otherwise, but still it is bound to be a long business.

My French has been cut off in its youth (at all events for the present), as the Frenchman that I used to converse with has been sent to another camp. I have heard that some of the papers had an account of how we were captured at Nieuport and if you can get hold of it, I wish you would and keep it for me as I should like to see their idea of it. It would be published I imagine about July 12th or 13th. If you happen to see my name in the casualty list, I wish you would keep those papers too, as they will probably be useful to me because of the dates.

The other day I suddenly heard somebody playing the Morning Song (we have a piano in camp) and although he played it without a scrap of feeling, it was good to hear music again, other than the usual ragtime and revue jingles, so that I sat down and listened for some tune. Since then however I have discovered a Frenchman who plays awfully well and as he plays pretty frequently I sit and listen while he plays Beethoven, Grieg etc. The other evening there were about 6 of us there and after he had played for some time, he and an Englishman played 2 or 3 duets and then another Frenchman sang several songs – altogether we had a small concert.

There is no regard paid here as to what costume you shall wear, as of course there can’t be, for men turn up in all sorts of weird uniforms, having lost part, or all of their own and had it made up with oddments of English, French and German things, so we dress as we please and on hot days some go about in a shirt and a pair of shorts (made out of a towel or something similar) and nobody puts on a collar and tie, which is lucky as I lost mine. I arrived too, minus a cap, but have been given one by a Frenchman, so that now I appear in all the glories of a French Tommy’s cap, which to be quite correct, has to be worn over one ear and gives me a decided rakish appearance.

There is no limit to the number of letters I may receive, although I can only write 2 a month and 4 post cards and only 6 sides per letter.

I do hope Mrs. Muggridge is quite alright again and that you yourself are having as easy a time as you can. What would I give to have you again? Well, the war will soon end and then – and then—-