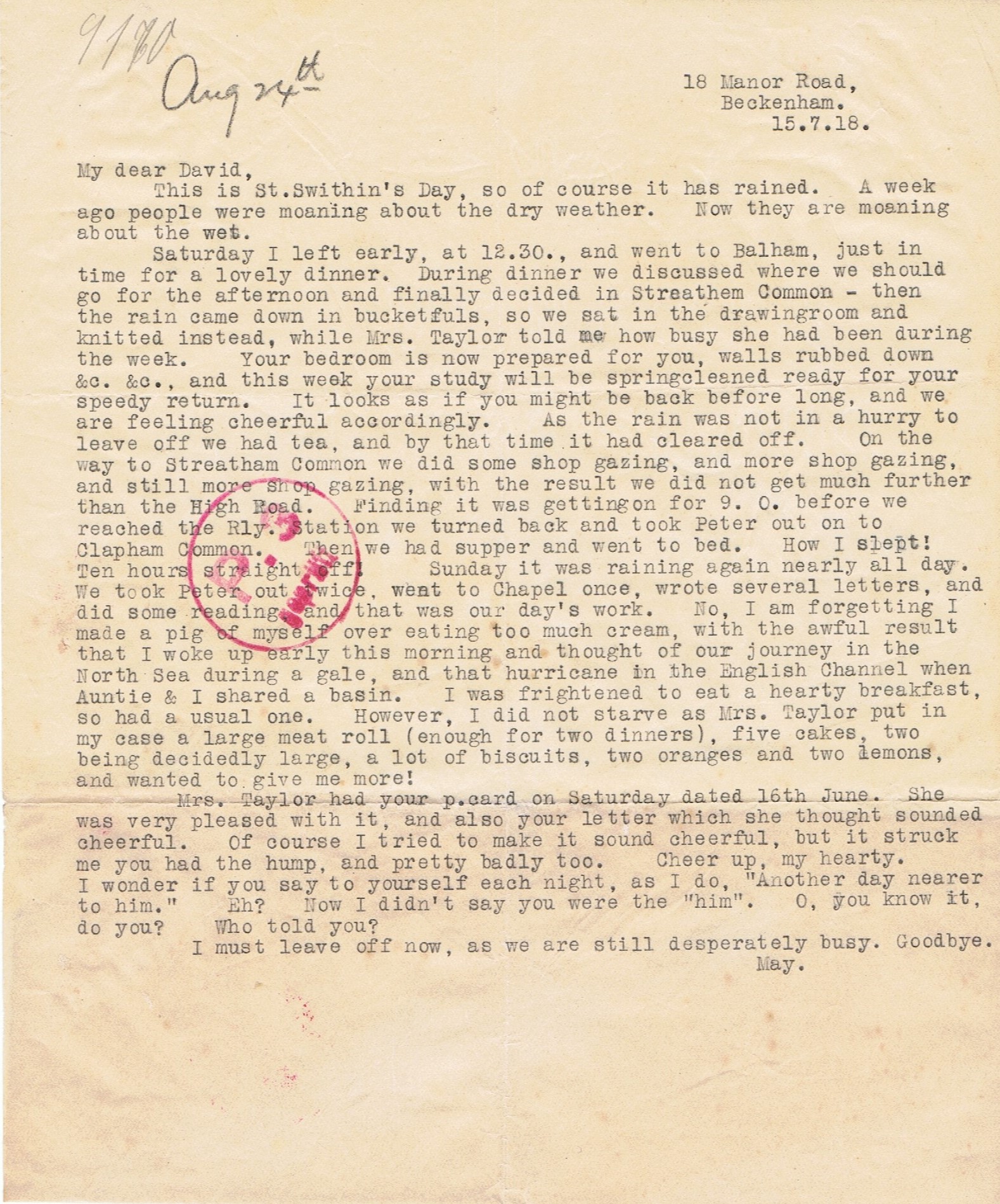 May to David Beckenham 15.7.18
My dear David,
This is St Swithin’s Day, so of course it has rained. A week ago people were moaning about the dry weather. Now they are moaning about the wet.
Saturday I left early, at 12.30, and went to Balham, just in time for a lovely dinner. During dinner we discussed where we should go for the afternoon and finally decided in Streatham Common – then the rain came down in bucketfuls, so we sat in the drawing room and knitted instead, while Mrs Taylor told me how busy she had been during the week. Your bedroom is now prepared for you, walls rubbed down etc etc, and this week your study will be spring cleaned ready for your speedy return. It looks as if you might be back before long, and we are feeling cheerful accordingly. As the rain was not in a hurry to leave off we had tea, and by that time it had cleared off. On the way to Streatham Common we did some shop gazing, and more shop gazing, and still more shop gazing, with the result we did not get much further than the High Road. Finding it was getting on for 9.0 before we reached the Rly Station we turned back and took Peter out on to Clapham Common. Then we had supper and went to bed. How I slept! Ten hours straight off. Sunday it was raining again nearly all day. We took Peter out twice, went to Chapel once, wrote several letters, and did some reading and that was our day’s work. No, I am forgetting I made a pig of myself over eating too much cream, with the awful result that I woke up this early this morning and thought of our journey in the North Sea during a gale, and that hurricane in the English Channel when Auntie & I shared a cabin. I was frightened to eat a hearty breakfast, so had a usual one. However, I did not starve as Mrs Taylor put in my case a large meat roll (enough for two dinners), five cakes, two being decidedly large, a lot of biscuits, two oranges and two lemons, and wanted to give me more!
Mrs Taylor had your p card on Saturday dated 16th June. She was very pleased with it, and also your letter which she thought sounded cheerful. Of course I tried to make it sound cheerful, but it struck me you had the hump, and pretty badly too. Cheer up, my hearty. I wonder if you say to yourself each night, as I do, “Another day nearer to him.” Eh? Now I didn’t say you were the “him”. O, you know it, do you? Who told you?
I must leave off now, as we are still desperately busy. Goodbye.
May