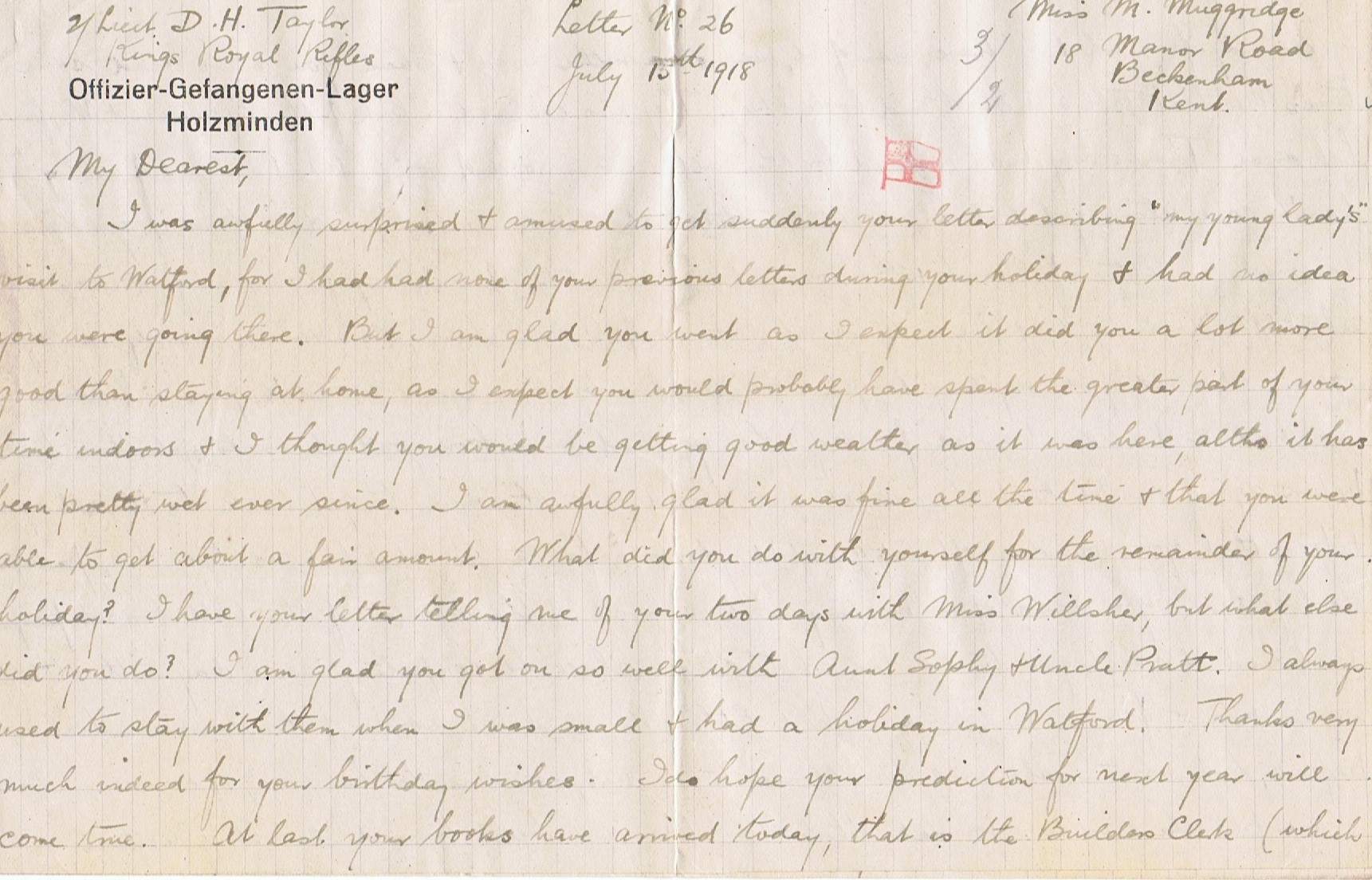 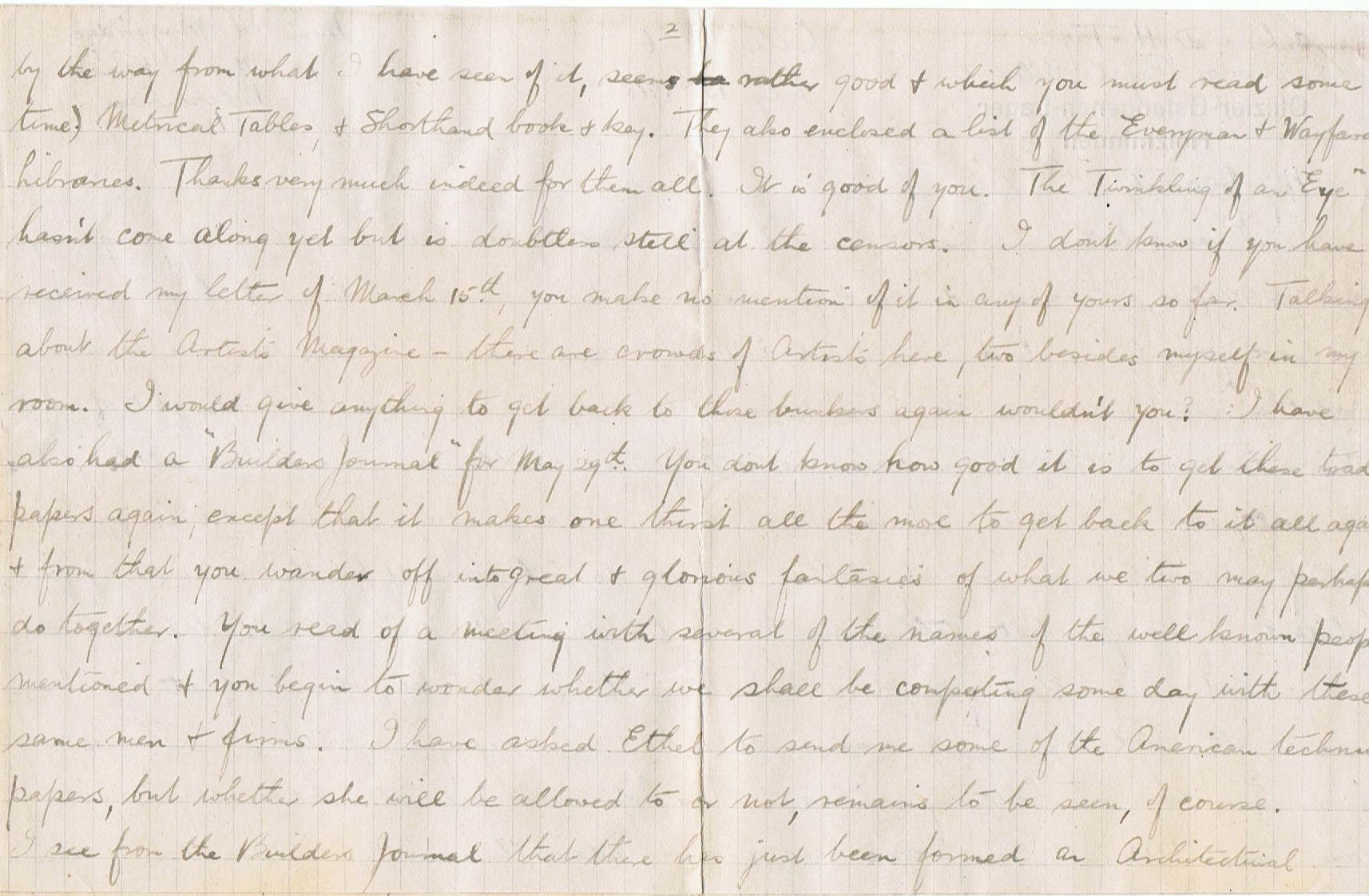 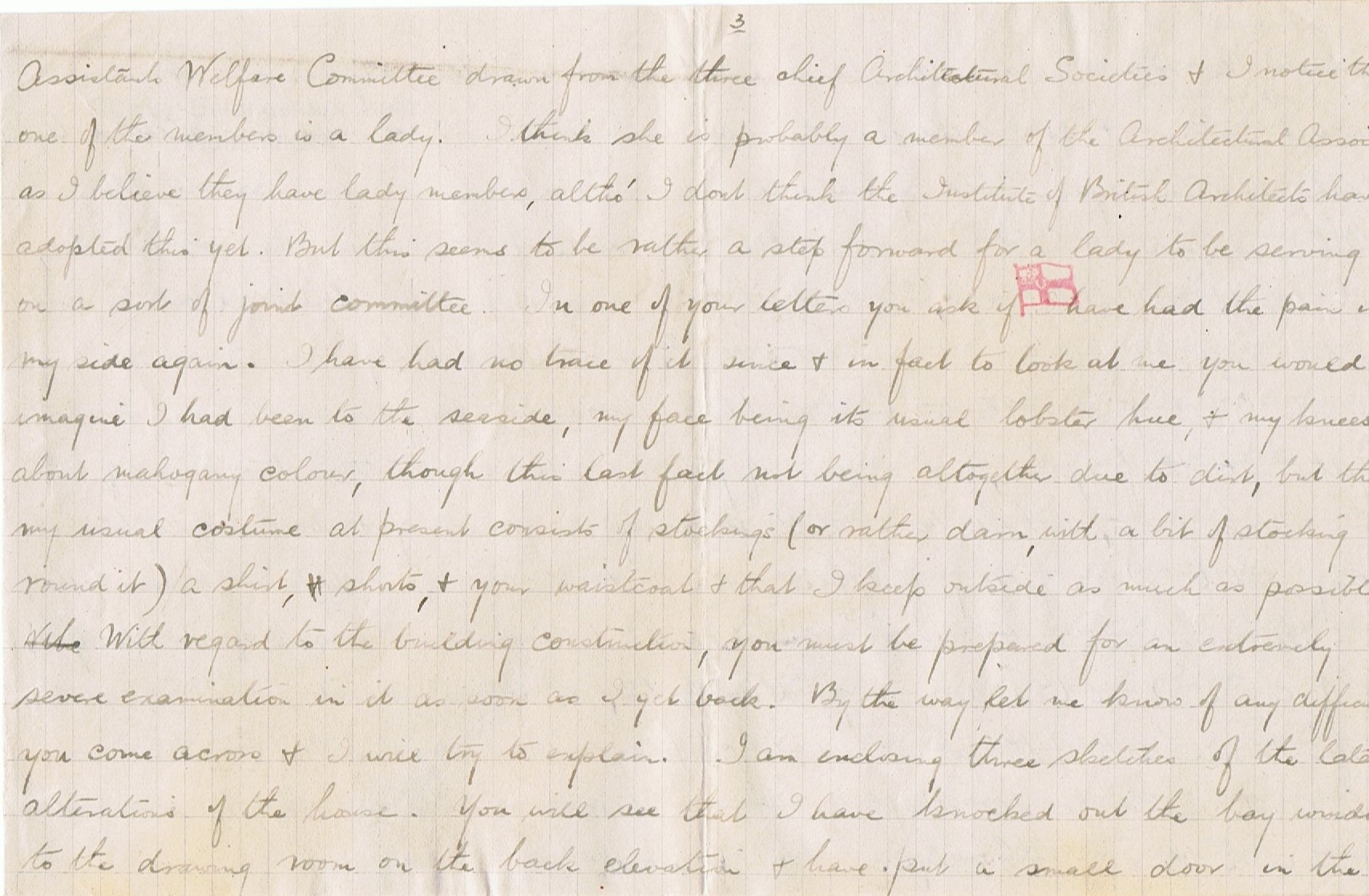 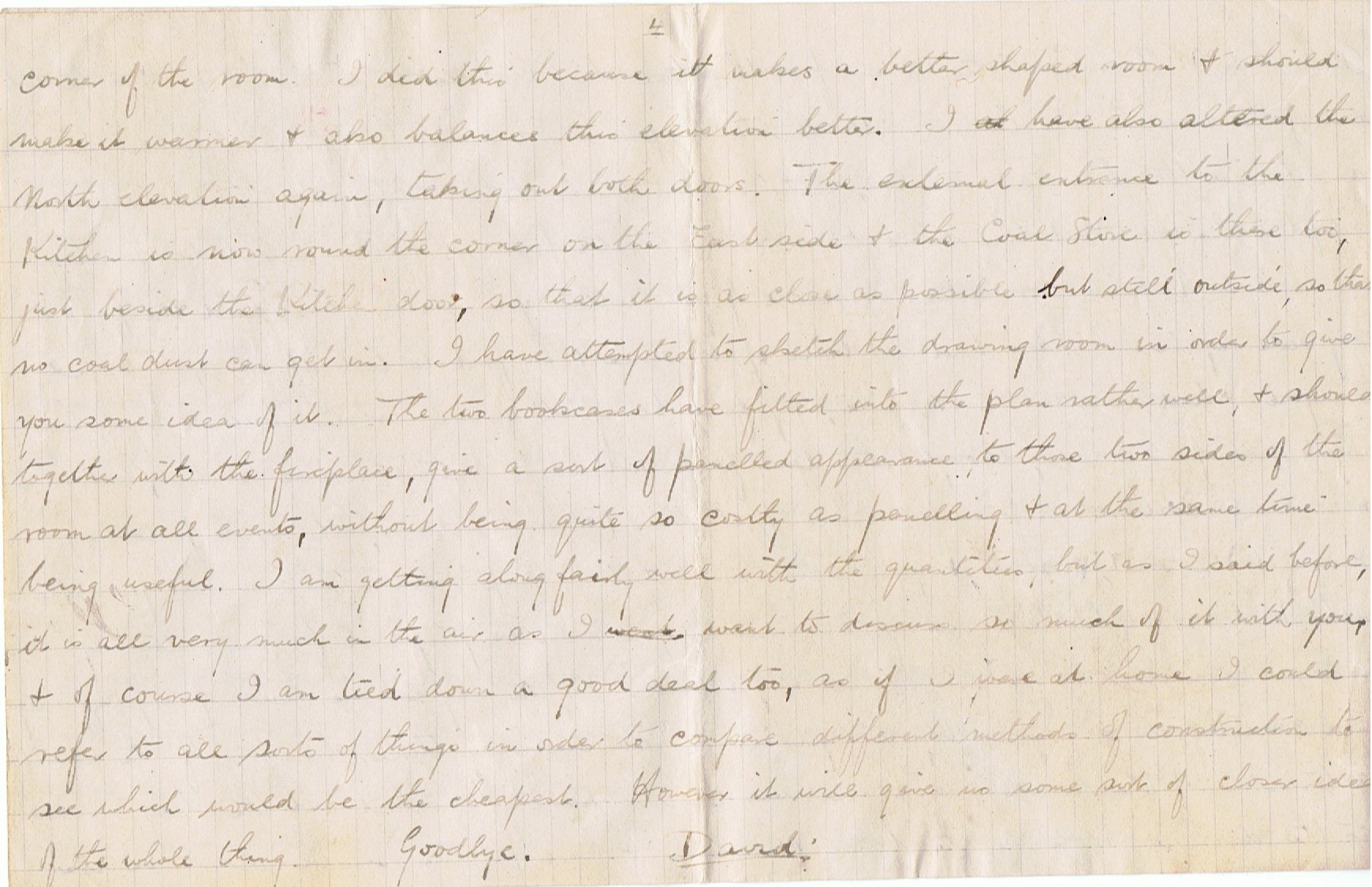 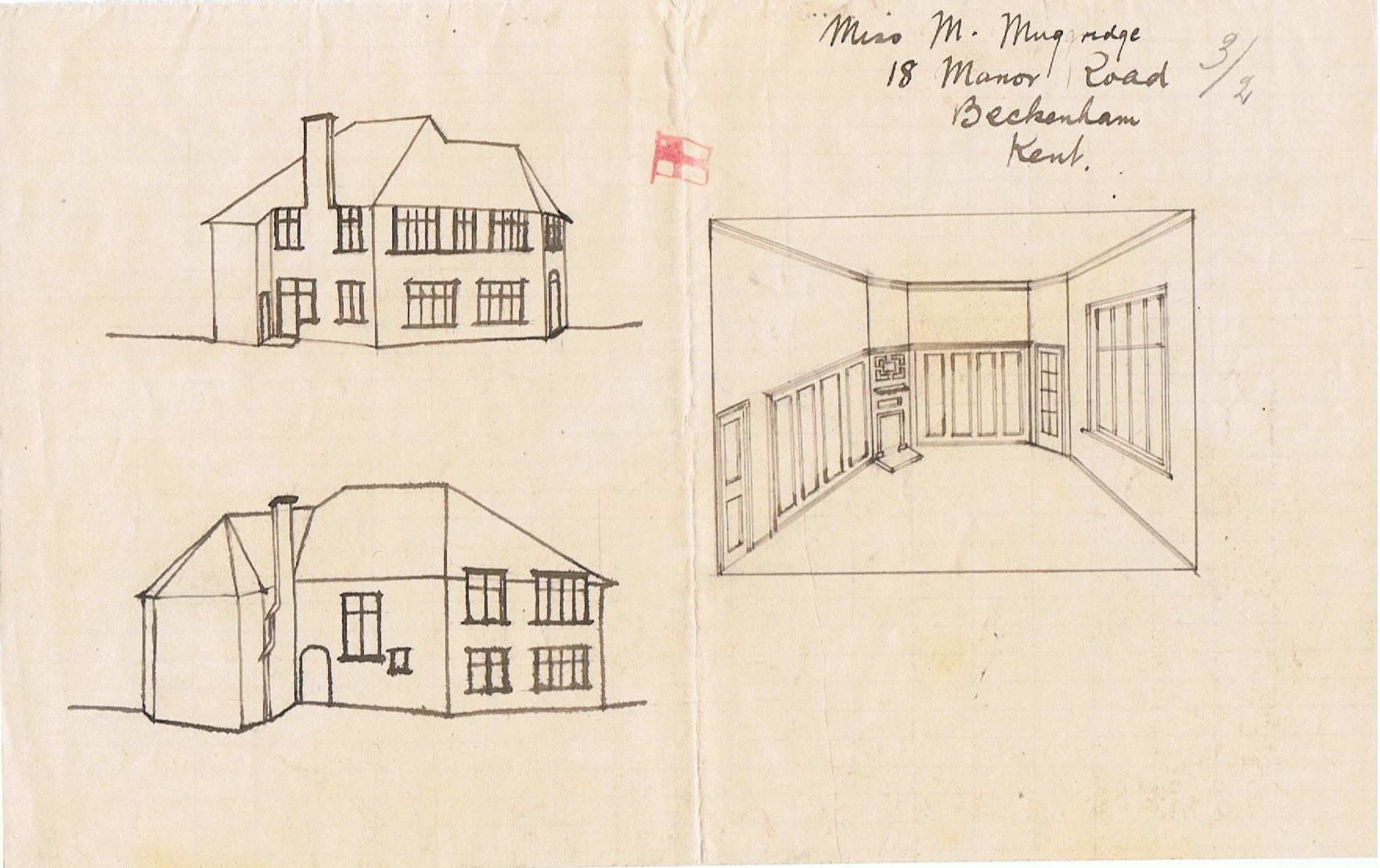 David to May Holzminden July 15th 1918
My Dearest,
I was awfully surprised and amused to get suddenly your letter describing “my young lady’s” visit to Watford, for I had had none of your previous letters during your holiday and had no idea you were going there. But I am glad you went as I expect it did you a lot more good than staying at home, as I expect you would probably have spent the greater part of your time indoors and I thought you would be getting good weather as it was here altho’ it has been pretty wet ever since. I am awfully glad it was fine all the time and that you were able to get about a fair amount. What did you do with yourself for the remainder of your holiday? I have your letter telling me of your two days with Miss Willsher, but what else did you do? I am glad you got on so well with Aunt Sophy and Uncle Pratt. I always used to stay with them when I was small and had a holiday in Watford. Thanks very much indeed for your birthday wishes. I do hope your prediction for next year will come true.
At last your books have arrived today, that is the Builders Clerk (which by the way from what I have seen of it, seems rather good and which you must read some time), Metrical Tables and Shorthand book and key. They also enclosed a list of the Everyman and Wayfarers Libraries. Thanks very much indeed for them all. It is good of you. The “Twinkling of an Eye” hasn’t come along yet but is doubtless still at the censors. I don’t know if you have received my letter of March 15th, you make no mention of it in any of yours so far. Talking about the Artists Magazine – there are crowds of Artists here, two besides myself in my room. I would give anything to get back to those bunkers again wouldn’t you? I have also had a “Builders Journal” for May 29th. You don’t know how good it is to get these trade papers again, except it makes one thirst to get back to it all again, and from that you wander off into great and glorious fantasies of what we too may perhaps do together. You read of meeting with several of the names of well known people mentioned and you begin to wonder whether we shall be competing some day with these same men and firms. I have asked Ethel to send me some of the American technical papers, but whether she will be allowed to or not remains to be seen, of course.
I see from the Builders Journal that there has just been formed an Architectural Assistance Welfare Committee drawn from the three chief Architectural Societies and I notice that one of the members is a lady. I think she is probably a member of the Architectural Association as I believe they have lady members, altho’ I don’t think the Institute of British Architects have adopted this yet. But this seems to be rather a step forward for a lady to be serving on a sort of joint committee. In one of your letters you ask if I have had the pain in my side again. I have had no trace of it since and in fact to look at me you would imagine I had been to the seaside, my face being its usual lobster hue, and my knees about mahogany colour, though this last fact not being altogether due to dirt, but that my usual costume at present consists of stockings (or rather darn, with a bit of stocking round it) a shirt, and shorts, and your waistcoat and that I keep outside as much as possible.
With regard to the building construction, you must be prepared for an extremely severe examination in it as soon as I come back. By the way let me know of any difficulty you come across and I will try t explain. I am enclosing three sketches of the latest alterations from the house. You will see that I have knocked out the bay window to the drawing room on the back elevation and have put a small door in the corner of the room. I did this because it makes a better shape room and should make it warmer and also balance the elevation better. I have also altered the North elevation again, taking out both doors. The external entrance to the Kitchen is now round the corner on the East side and the Coal Store is there too, just beside the Kitchen door, so that it is as close as possible but still outside, so that no coal dust can get in. I have attempted to sketch the drawing room in order to give you some idea of it. The two book cases have fitted into the plan rather well and should together with the fireplace, give a sort of panel appearance to the two sides of the room at all events, without being quite so costly as panelling and at the same time being useful. I am getting on very well with the quantities, but as I said before it is all very much in the air as I want to discuss so much of it with you and of course I am tied down a good deal too, as if I were at home I could refer to all sorts of things in order to compare different methods of construction to see which would be the cheapest. However it will give us some sort of closer idea of the whole thing.
Goodbye
David