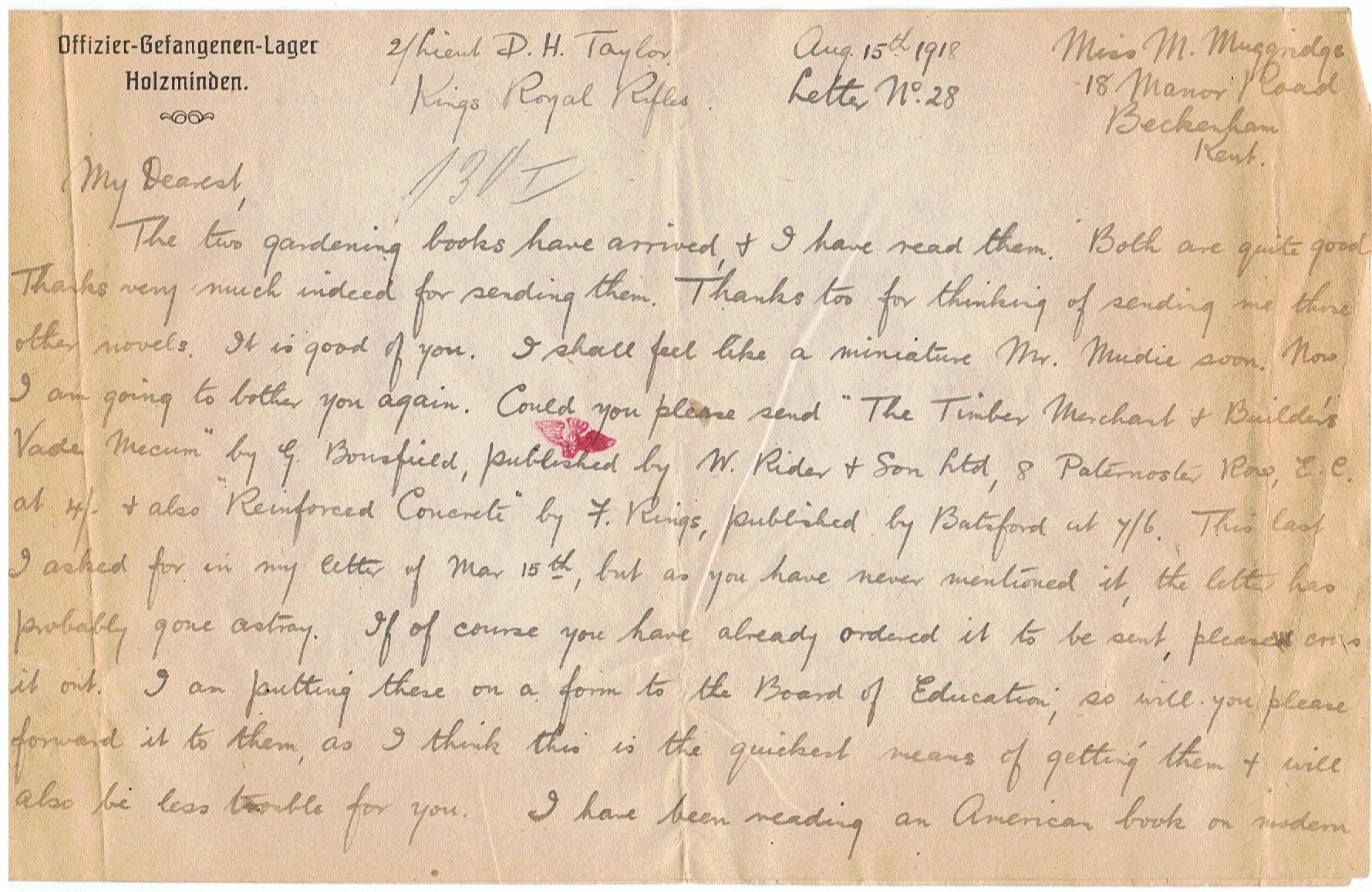 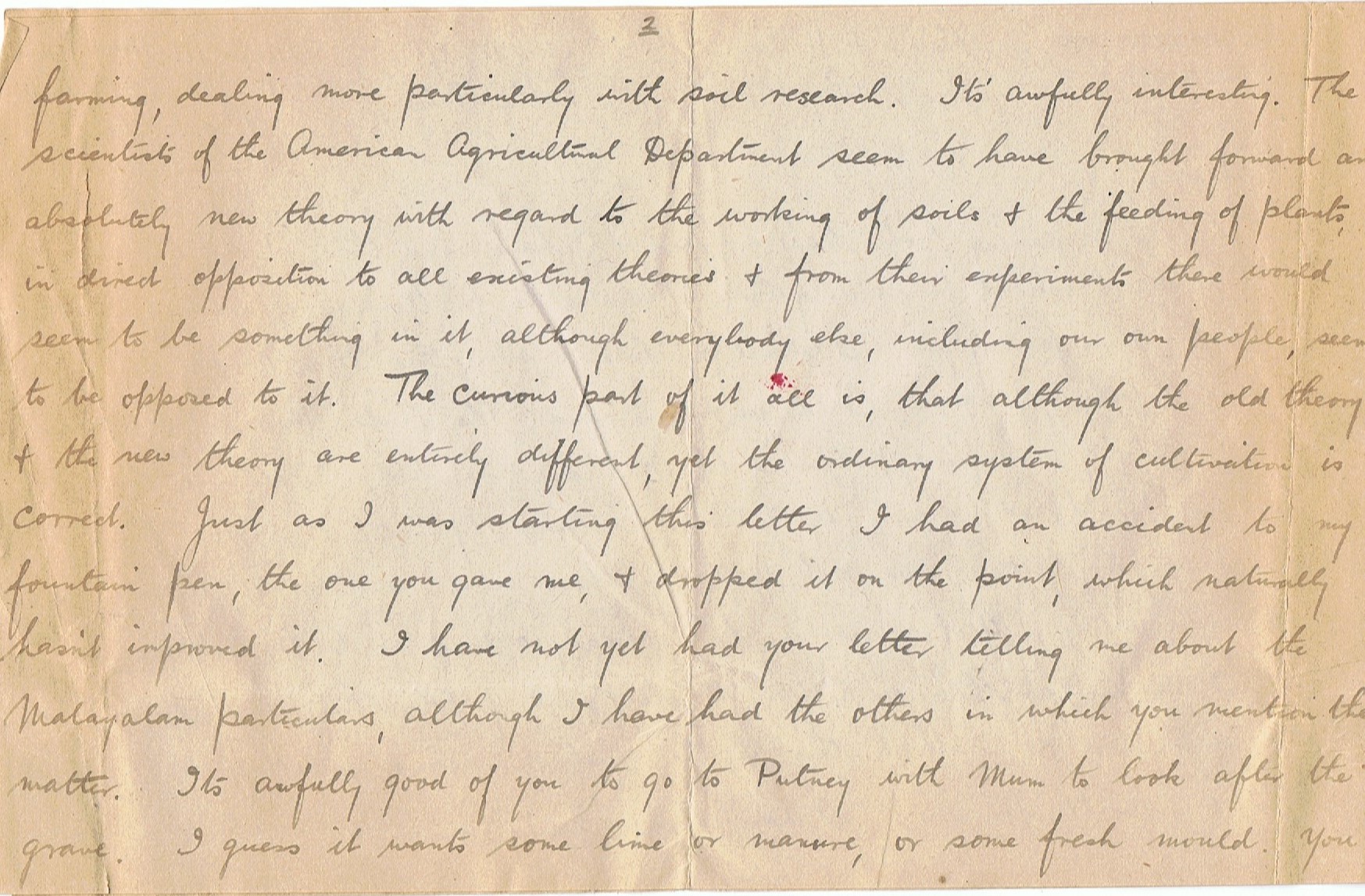 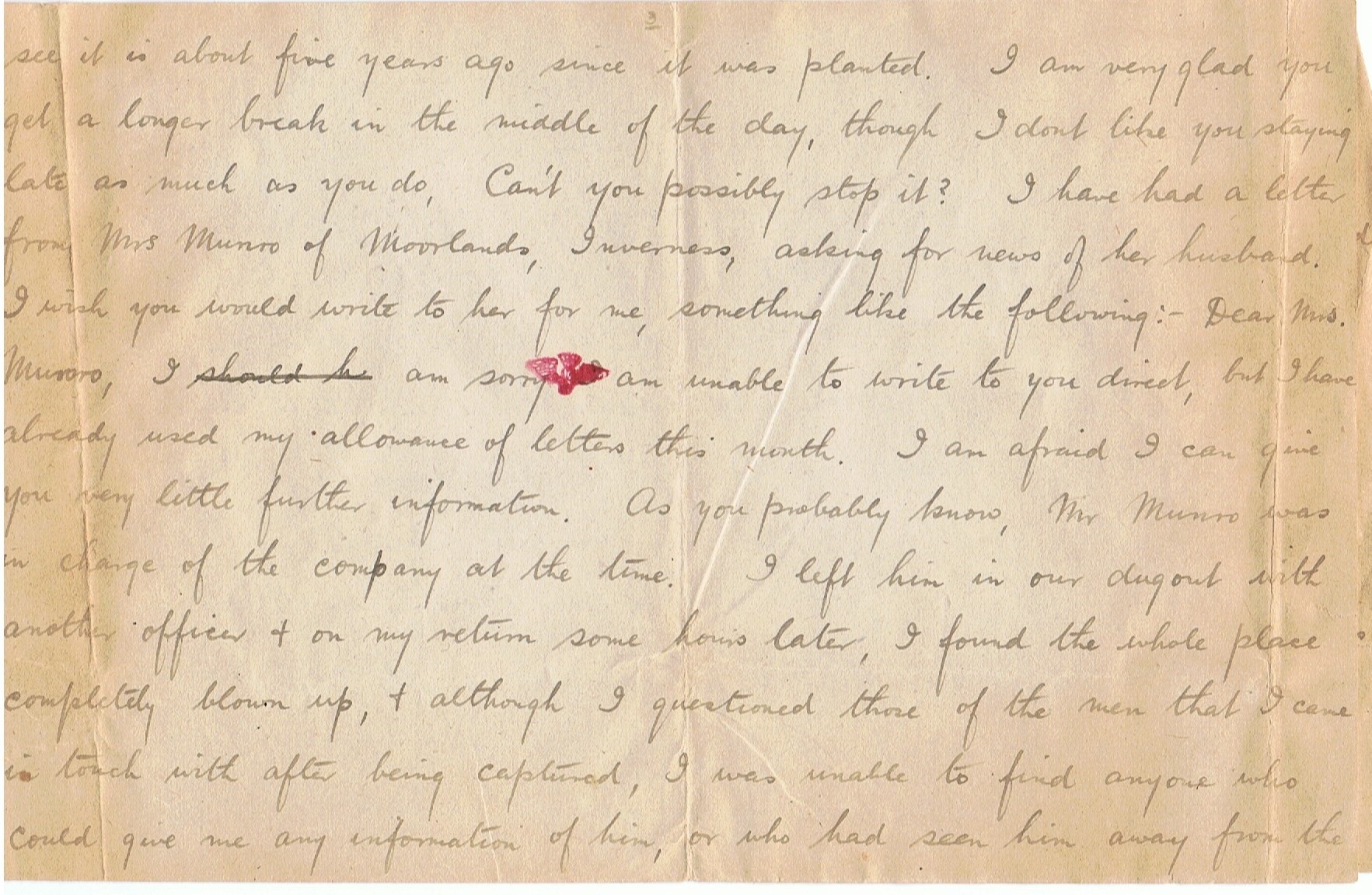 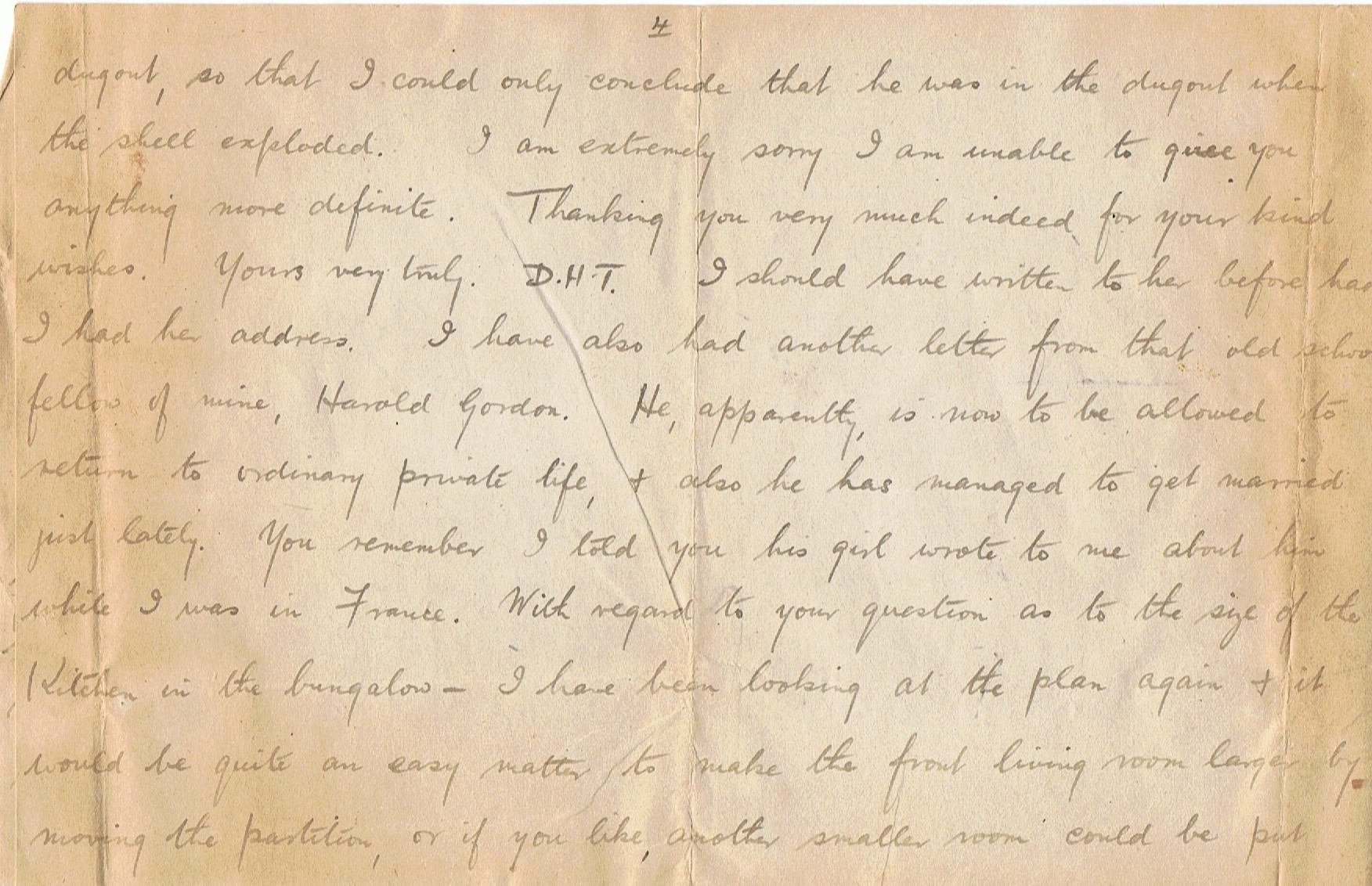 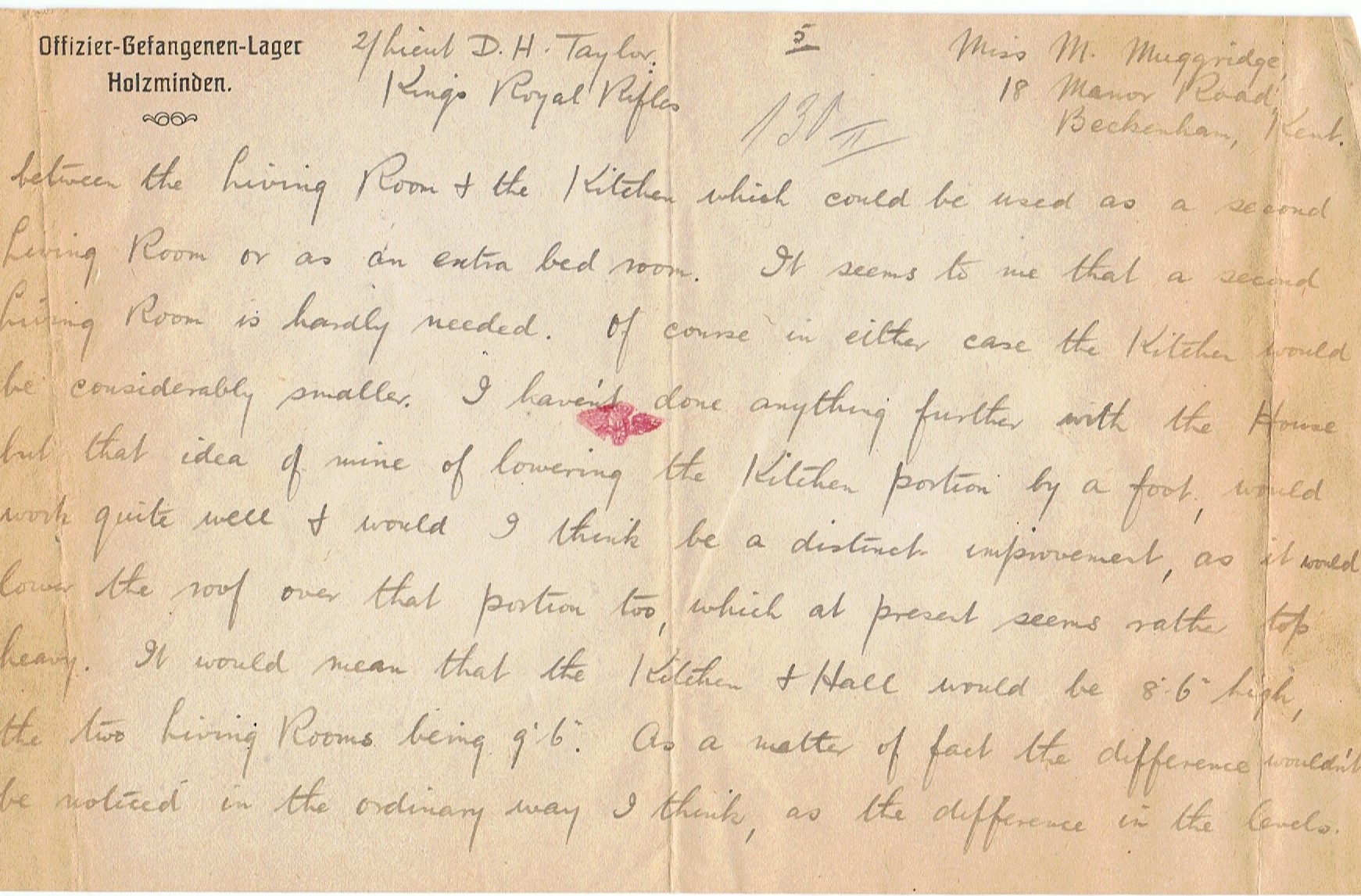 David to May Holzminden Letter No 28 August 15th 1918
My Dearest,
Two gardening books have arrived, and I have read them. Both are quite good. Thanks very much indeed for sending them. Thanks too for thinking of sending me those other novels. It is good of you. I shall feel like a miniature Mr Mudie soon. Now I am going to bother you again. Could you please send “The Timber Merchant and Builders’s Vade Mecum” by G Bonsfield, published by W Rider & Son Ltd, 8 Paternoster Row, EC, at 4/- and also “Reinforced Concrete” by F Rings, published by Batesford at 7/6. This last I asked for in my letter of March 15th, but as you have never mentioned it, the letter has probably gone astray. If of course you have already ordered it to be sent, please cross it out. I am putting these on a form to the Board of Education, so will you please forward it to them, as I think this is the quickest means of getting them and will also be less trouble for you. I have been reading an American book on modern farming, dealing more particularly with soil research. It’s awfully interesting. The scientists of the American Agricultural Department seem to have brought forward an absolutely new theory with regard to the working of soils and the feeding of plants in direct opposition to all existing theories and from their experiments there would seem to be something in it, although everybody else, including our own people, seem to be opposed to it. The curious part of it all is, that although the old theory and the new theory are entirely different, yet the ordinary system of cultivation is correct.
Just as I was starting this letter I had an accident to my fountain pen, the one you gave me, and dropped it on the point, which naturally hadn’t improved it. I have not yet had your letter telling me about the Malayalam particulars, although I have had the others in which you mention the matter. Its awfully good of you to go to Putney with Mum to look after the grave. I guess it wants some lime or manure, or some fresh mould. You see it is about five years ago since it was planted. I am very glad you get a longer break in the middle of the day, though I don’t like you staying late as much as you do. Can’t you possibly stop it? I have had a letter from Mrs Munro of Moorlands, Inverness, asking for news of her husband. I wish you would write to her for me, something like the following:- Dear Mrs Munro, I am sorry I am unable to write to you direct, but I have already used my allowance of letters this month. I am afraid I can give you very little further information. As you probably know, Mr Munro was in charge of the company at the time. I left him in our dugout with another officer and on my return some hours later, I found the whole place completely blown up, and although I questioned those of the men that I came in touch with after being captured, I was unable to find anyone who could give me any information of him, or who had seen him away from the dugout, so that I could only conclude that he was in the dugout when the shell exploded. I am extremely sorry I am unable to give you anything more definite. Thanking you very much indeed for your kind wishes. Yours very truly, DHT. I should have written to before had I had her address. I have also had another letter from that old school friend of mine, Harold Gordon. He, apparently, is now to be allowed to return to ordinary private life, and also he has managed to get married just lately.
With regard to your question as to the size of the Kitchen in the bungalow – I have been looking at the plan again and it would be quite an easy matter to make the front living room larger by moving the partition, or if you like, another smaller room could be put between the Living Room and the Kitchen which could be used as a second Living Room or an extra bedroom. It seems to me that a second Living Room is hardly needed. Of course in either case the Kitchen would be considerably smaller. I haven’t done anything further with the House but that idea of mine of lowering the Kitchen portion by a foot, would work quite well and would I think be a distinct improvement, as it would lower the roof over that portion too, which at present seems rather heavy. It would mean that the Kitchen and Hall would be 8’6” high, the two Living Rooms being 9’6”. As a matter of fact the difference wouldn’t be noticed in the ordinary way I think, as the difference in the levels wouldn’t, or course, show anywhere. Don’t you wish it were built and we were in it. I do.
Goodbye.
David