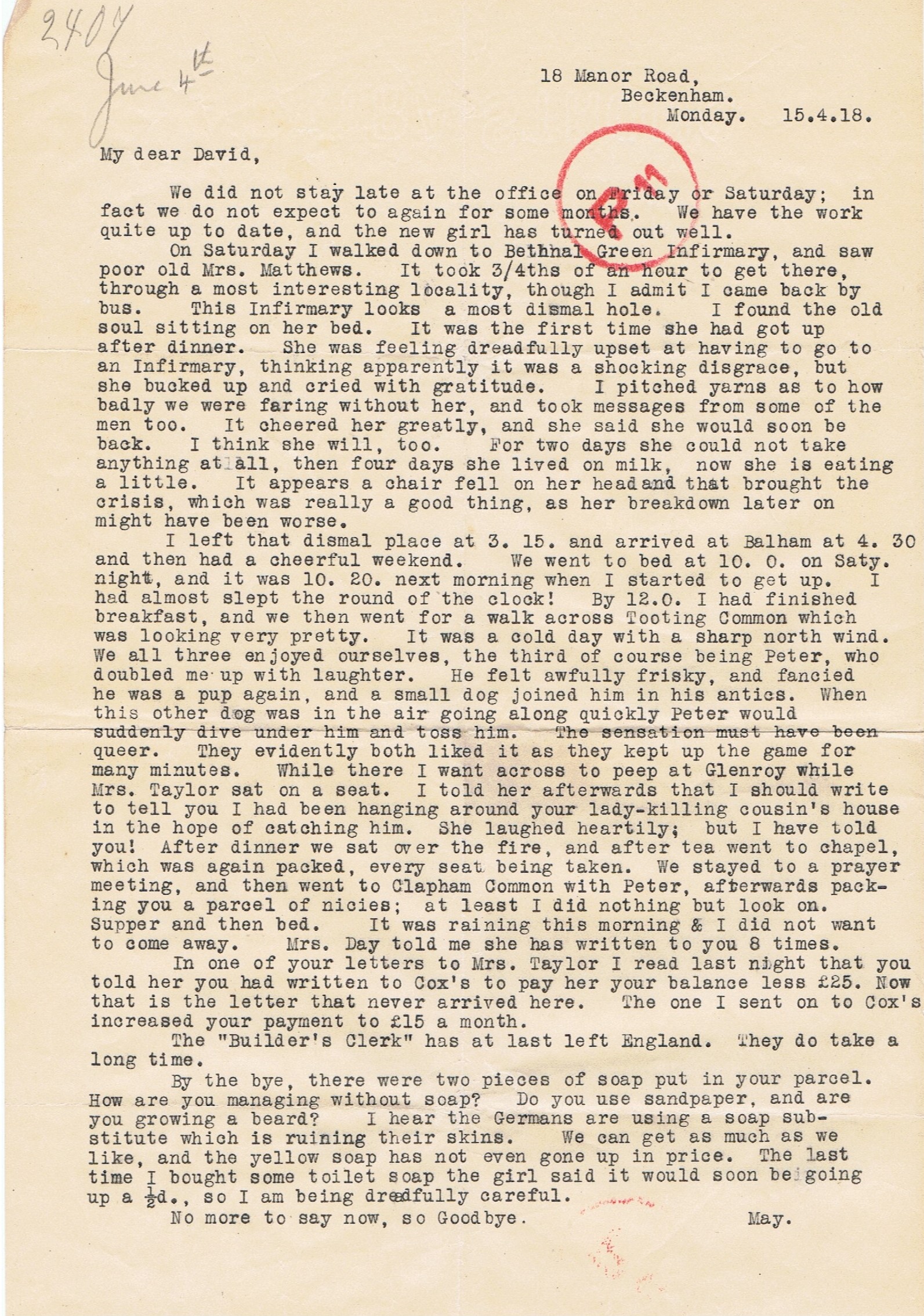 May to David 15.4.18
My dear David,
We did not stay late at the office on Friday or Saturday; in fact we do not expect to again for some months. We have the work quite up to date, and the new girl has turned out well.
On Saturday I walked down to Bethnal Green Infirmary, and saw poor old Mrs Matthews. It took 3/4ths of an hour to get there, through a most interesting locality, though I admit I came back by bus. This Infirmary looks a most dismal hole. I found the old soul sitting on her bed. It was the first time she had got up after dinner. She was feeling dreadfully upset at having to go to an Infirmary, thinking apparently it was a shocking disgrace, but she bucked up and cried with gratitude. I pitched yarns as to how badly we were faring without her, and took messages from some of the men too. It cheered her greatly, and she said she would soon be back. I think she will, too. For two days she could not take anything at all, then four days she lived on milk, now she is eating a little. It appears that a chair fell on her head and that brought the crisis, which was really a good thing, as her breakdown later on might have been worse.
I left that dismal place at 3.15 and arrived at Balham at 4.30 and then had a cheerful weekend. We went to bed at 10.0 on Saty night, and it was 10.20 next morning when I started to get up. I had almost slept the round of the clock! By 12.0 I had finished breakfast, and we then went for a walk across Tooting Common which was looking very pretty. It was a cold day with a sharp north wind. We all three enjoyed ourselves, the third of course being Peter, who doubled me up with lughter. He felt awfully frisky, and fancied he was a pup again, and a small dog joined him in his antics. When this other dog was in the air going along quickly Peter would suddenly dive under him and toss him. The sensation must have been queer. They evidently both liked it as they kept up the game for many minutes. While there I went across to peep at Glenroy while Mrs Taylor sat on a seat. I told her afterwards that I should write to tell you I had been hanging around your lady-killing cousin’s house in the hopes of catching him. She laughed heartily; but I have told you! After dinner we sat over the fire, and after tea went to chapel, which was again packed, every seat being taken. We stayed to a prayer meeting, and then went to Clapham Common with Peter, afterwards packing you a parcel of nicies; at least I did nothing but look on. Supper then bed. It was raining this morning & I did not want to come away. Mrs Day told me she has written to you 8 times.
In one of your letters to Mrs Taylor I read last night that you told her you had written to Cox’s to pay her your balance less £25. Now that is the letter that never arrived here. The one I sent on to Cox’s increased your payment to £15 a month.
The “Builder’s Clerk” has at last left England. They do take a long time.
By the bye, there were two pieces of soap put in your parcel. How are you managing without soap? Do you use sandpaper, and are you growing a beard? I hear the Germans are using a soap substitute which is ruining their skins. We can get as much as we like, and the yellow soap has not even gone up in price. The last time I bought some toilet soap the girl said it would soon be going up 1/2d, so I am being dreadfully careful.
No more to say now, so Goodbye. May