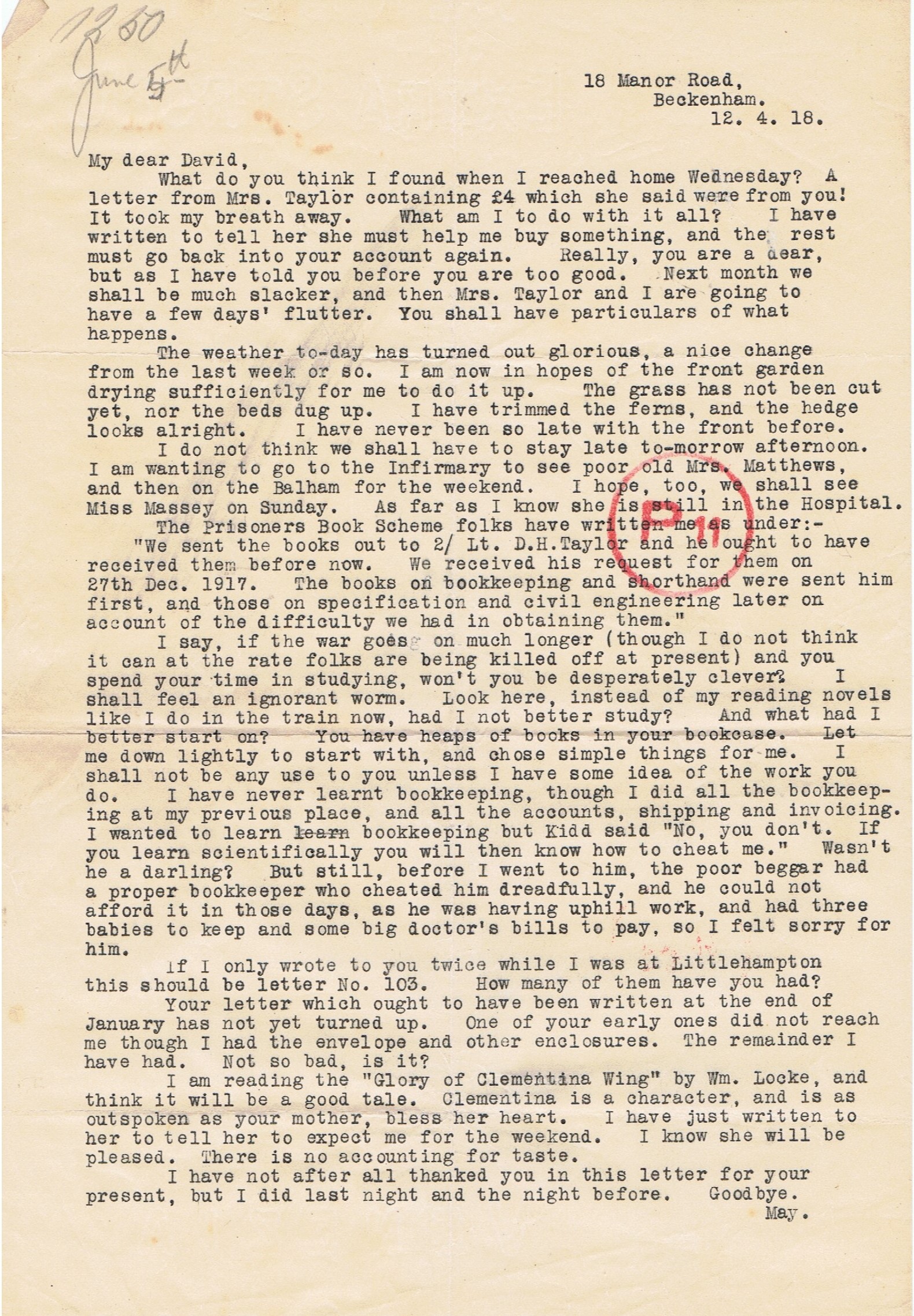 May to David 12.4.18
My dear David,
What do you think I found when I reached home Wednesday? A letter from Mrs Taylor containing £4 which she said were from you! It took my breath away. What am I to do with it all? I have written to tell her she must help me buy something, and the rest must go back into your account again. Really, you are a dear, but as I have told you before you are too good. Next month we shall be much slacker, and then Mrs Taylor and I are going to have a few days’ flutter. You shall have particulars of what happens.
The weather today has turned out glorious, a nice change from the last week or so. I am now in hopes of the front garden drying sufficiently for me to do it up. The grass has not been cut yet, nor the beds dug up. I have trimmed the ferns, and the hedge looks alright. I have never been so late with the front before.
I do not think I shall have to stay later tomorrow afternoon. I am wanting to go to the Infirmary to see poor old Mrs Matthews, and then on to Balham for the weekend. I hope, too, we shall see Miss Massey on Sunday. As far as I know she is still in the Hospital.
The Prisoners Book Scheme folks have written me as under;-
“We sent the books out to 2/Lt DH Taylor and he ought to have received them before now. We received his request for them on 27th Dec 1917. The books on bookkeeping and shorthand were sent him first, and those on specification and civil engineering later on account of the difficulty we had in obtaining them.”
I say, if the war goes on much longer (though I do not think it can at the rate folks are being killed off at present) and you spend your time in studying, won’t you be desperately clever? I shall feel an ignorant worm. Look here, instead of my reading novels like I do on the train now, had I better not study? And what had I better start on? You have heaps of books in your bookcase. Let me down lightly to start with, and chose simple things for me. I shall not be any use to you unless I have some idea of the work you do. I have never learnt bookkeeping, though I did all the bookkeeping at my previous place, and all the accounts, shipping and invoicing. I wanted to learn bookkeeping but Kidd said “No, you don’t. If you learn scientifically you will then know how to cheat me.” Wasn’t he a darling? But still, before I went to him, the poor beggar had a proper bookkeeper who cheated him dreadfully, and he could not afford it in those days, as he was having uphill work, and had three babies to keep and some big doctor’s bills to pay, so I felt sorry for him.
If I only wrote to you twice while I was at Littlehampton this should be letter No 103. How many of them have you had?
Your letter which ought to have been written at the end of January has not yet turned up. One of your early ones did not reach me though I had the envelope and other enclosures. The remainder I have had. Not so bad, is it?
I am reading the “Glory of Clementina Wing” by Wm Locke, and think it will be a good tale. Clementina is a character, and is as outspoken as your mother, bless her heart. I have just written to her to tell her to expect me for the weekend. I know she will be pleased. There is no accounting for taste.
I have not after all thanked you in this letter for your present, but I did last night and the night before. Goodbye.
May