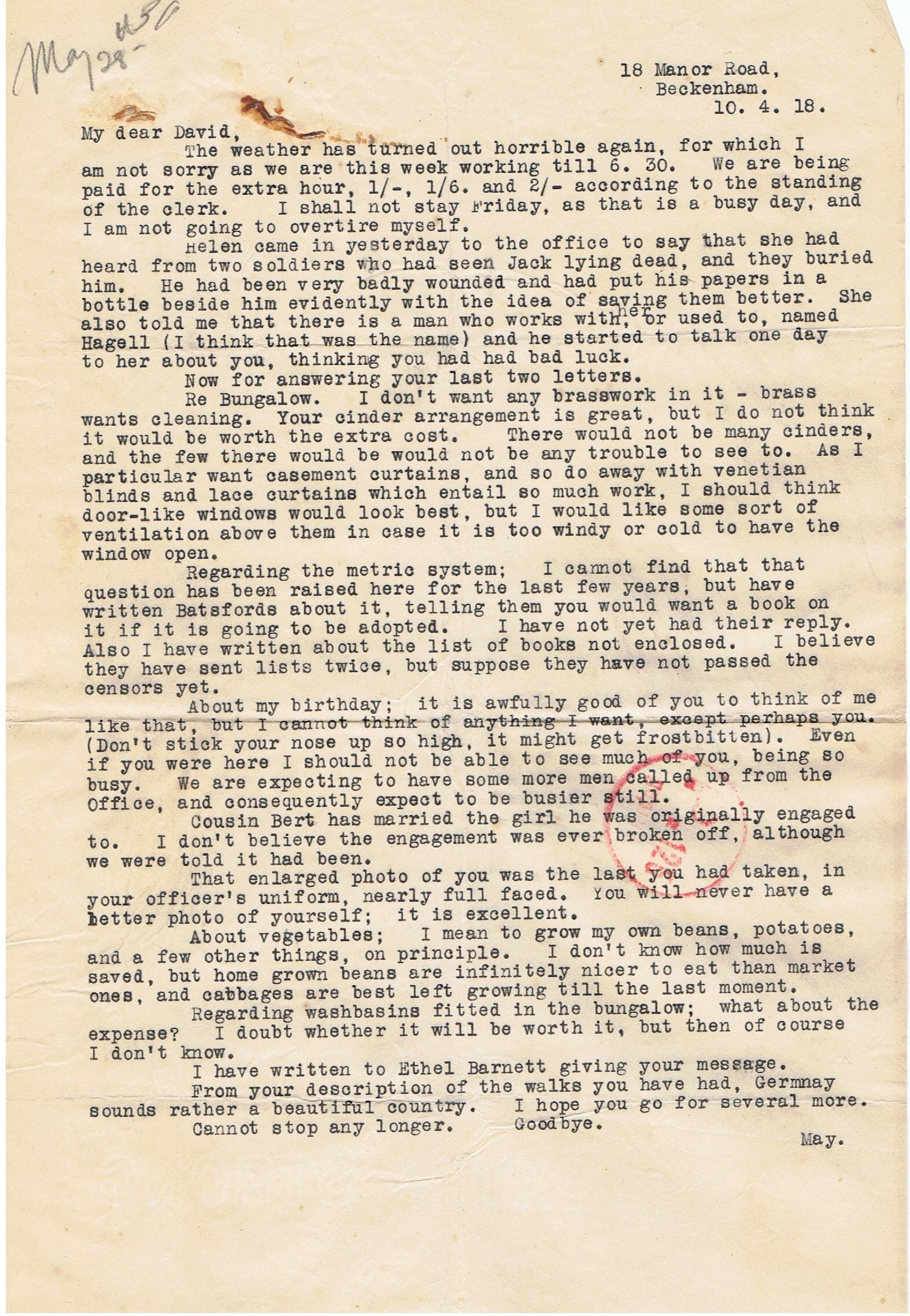 May to David 10.4.18
My dear David,
The weather has turned out horrible again, for which I am not sorry as this week we are working till 6.30. We are being paid for the extra hour, 1/-, 1/6 and 2/- according to the standing of the clerk. I shall not stay Friday, as that is a busy day, and I am not going to overtire myself.
Helen came in yesterday to the office to say that she had heard from two soldiers who had seen Jack lying dead, and they buried him. He had been very badly wounded and had put his papers in a bottle beside him evidently with the idea of saving them better. She also told me that there is a man who works with her, or used to, named Hagell (I think that was the name) and he started to talk one day to her about you, thinking you had had bad luck.
Now for answering your last two letters.
Re bungalow. I don’t want any brasswork in it – brass wants cleaning. Your cinder arrangement is great, but I do not think it would be worth the extra cost. There would not be many cinders, and the few there would be would not be any trouble to see to. As I particular want casement curtains, and so do away with venetian blinds and lace curtains which entail so much work. I should think door like windows would look best, but I would like some sort of ventilation above them in case it is too windy or cold to have the window open.
Regarding the metric system; I cannot find that question has been raised here for the last few years, but have written Batsfords about it, telling them you would want a book on it if is going to be adopted. I have not yet had their reply. Also I have written about the list of books not enclose. I believe they have sent lists twice, but suppose they have not passed the censors yet.
About my birthday; it is awfully good of you to think of me like that, but I cannot think of anything I want, except perhaps you. (Don’t stick your nose up so high, it might get frost bitten), Even if you were here I should not be able to see much of you, being so busy. We are expecting to have some more men called up from the Office, and consequently expect to be busier still.
Cousin Bert has married the girl he was originally engaged to. I don’t believe the engagement was ever broken off, although we were told it had been.
That enlarged photo of you was the last you had taken, in your officer’s uniform, nearly full faced. You will never have a better photo of yourself; it is excellent.
About vegetables; I mean to grow my own beans, potatoes, and a few other things, on principle. I don’t know how much is saved, but home grown beans are infinitely nicer to eat than market ones, and cabbages are best left growing till the last moment.
Regarding washbasins fitted in the bungalow; what about the expense? I doubt whether it will be worth it, but then of course I don’t know.
I have written to Ethel Barnett giving your message.
From your description of the walks you have had, Germany sounds rather a beautiful country. I hope you go for several more.
Cannot stop any longer. Goodbye.
May