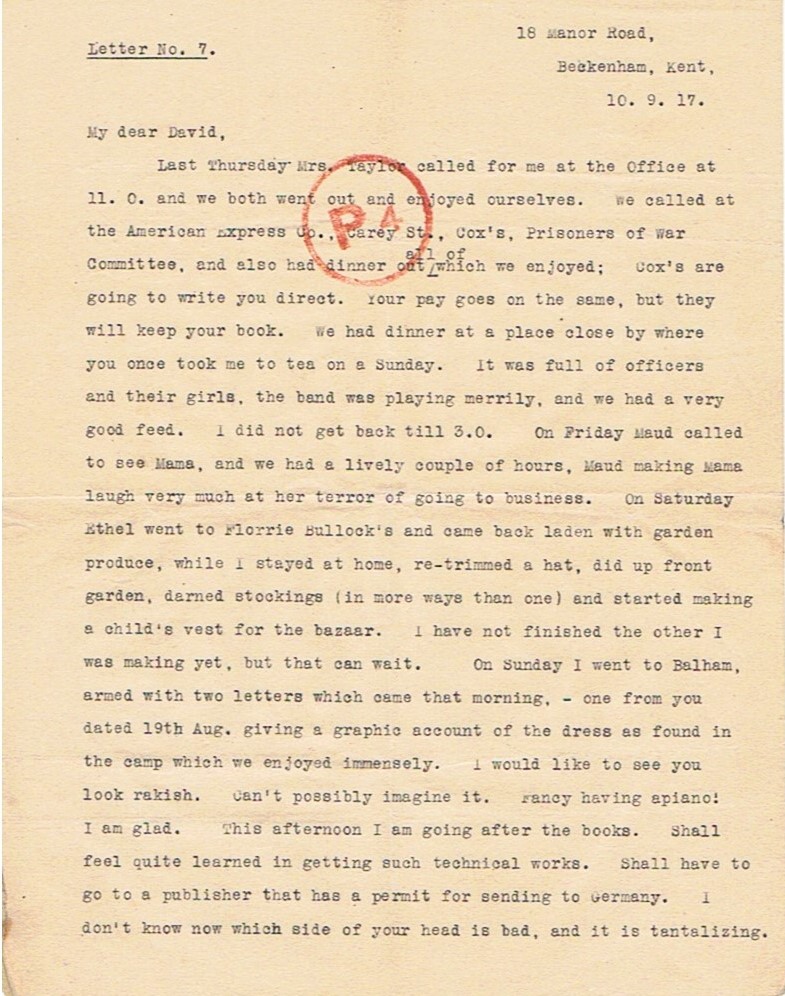 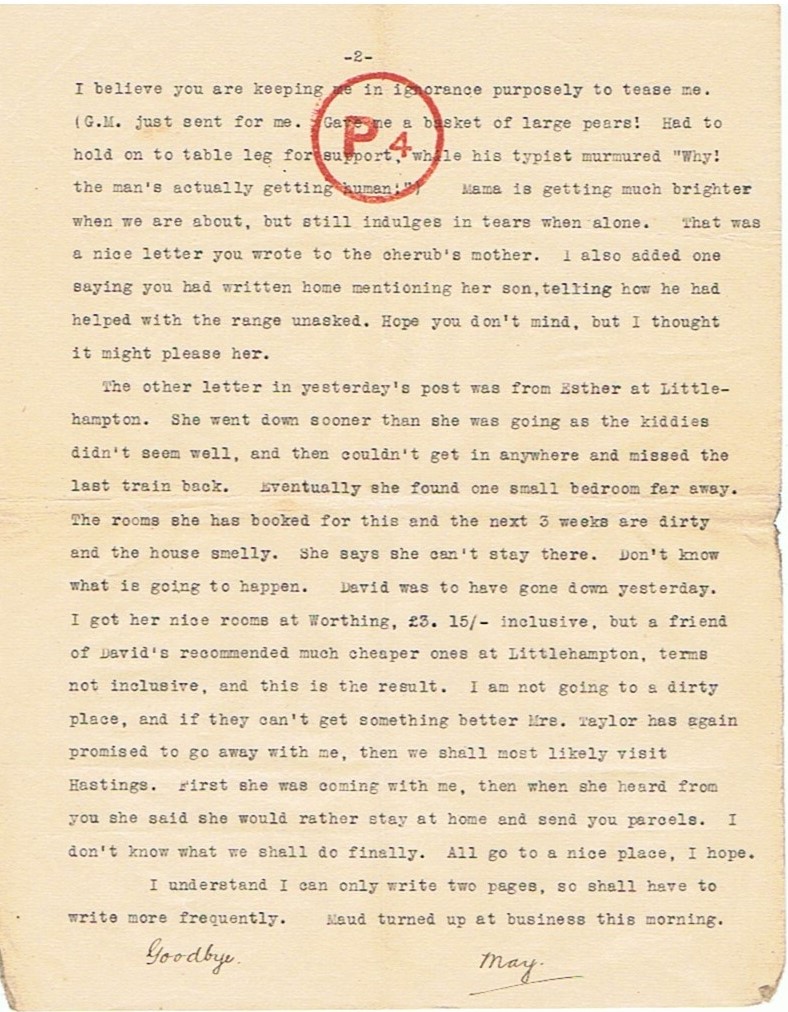 Last Thursday Mrs Taylor called for me at the office at 11. 0. and we both went out and enjoyed ourselves. We called at the American Express Co, Carey St., Cox’s, Prisoners of War Committee, and also had dinner out, all of which we enjoyed. Cox’s are going to write you direct. Your pay goes on the same, but they will keep your book, we had dinner at a place close by where you once took me to tea on a Sunday. It was full of officers and their girls, the band, was playing merrily, and we had a very good feed. I did not get back till 3.0.         On Friday Maud called to see Mama, and we had a lively couple of hours, Maud making Mama laugh very much at her terror of going to business. On Saturday Ethel went to Florrie Bullocks and came back laden with garden produce, while I stayed at home, re-trimmed a hat, did up front garden, darned stockings (in more ways than one) and started making a child’s vest for the bazaar. I have not finished the other I was making yet, but that can wait.      On Sunday I went to Balham, armed with two letters which came that morning, one from you dated 19th Aug. giving a graphic account of the dress as found in the camp which we enjoyed immensely. I would like to see you look rakish. Can’t possibly imagine it. Fancy having a piano! I am glad. This afternoon I am going after the books. Shall feel quite learned in getting such technical works. Shall have to go to a publisher that has a permit for sending to Germany. I don’t know now which side of your head is bad, and it is tantalizing. I believe you are keeping me in ignorance purposely to tease me.

(G.M. just sent for me. Gave me a basket of large pears! Had to hold on to table leg for support, while his typist murmured “Why!  the man’s actually getting human! “) Mama is getting much brighter when we are about, but still indulges in tears when alone.     That was a nice letter you wrote to the cherub’s mother. I also added one saying you had written home mentioning her son, telling how he had helped with the range unasked. Hope you don’t mind, but I thought it might please her.

The other letter in yesterday’s post was from Esther at Littlehampton. She went down sooner than she was going as the kiddies didn’t seem well, and then couldn’t get in anywhere and missed the last train back. Eventually she found one small bedroom far away. The rooms she has booked for this and the next 3 weeks are dirty and the house smelly. She says she can’t stay there. Don’t know what is going to happen. David was to have gone down yesterday. I got her nice rooms at Worthing, £3. 15/- inclusive, but a friend of David’s recommended much cheaper ones at Littlehampton, terms not inclusive, and this is the result. I am not going to a dirty place, and if they can’t get something better Mrs Taylor has again promised to go away with me, then we shall most likely visit Hastings. First she was coming with me, then when she heard from you she said she would rather stay at home and send you parcels. I don’t know what we shall do finally. All go to a nice place, I hope.

I understand I can only write two pages, so shall have to write more frequently.               Maud turned up at business this morning.