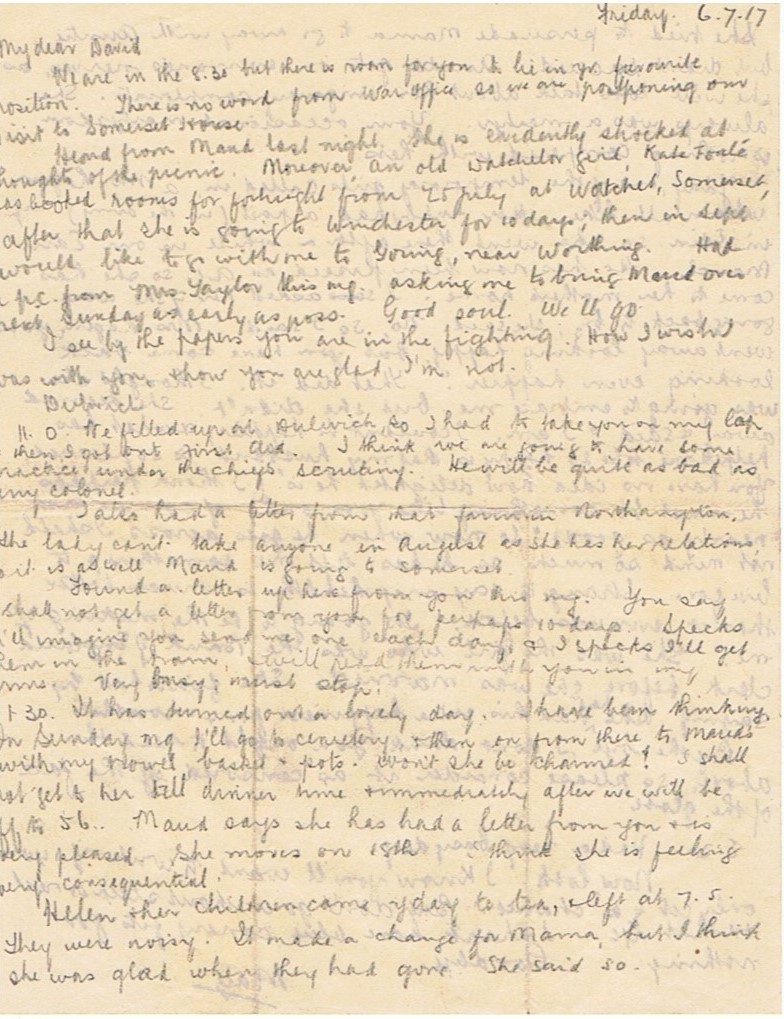 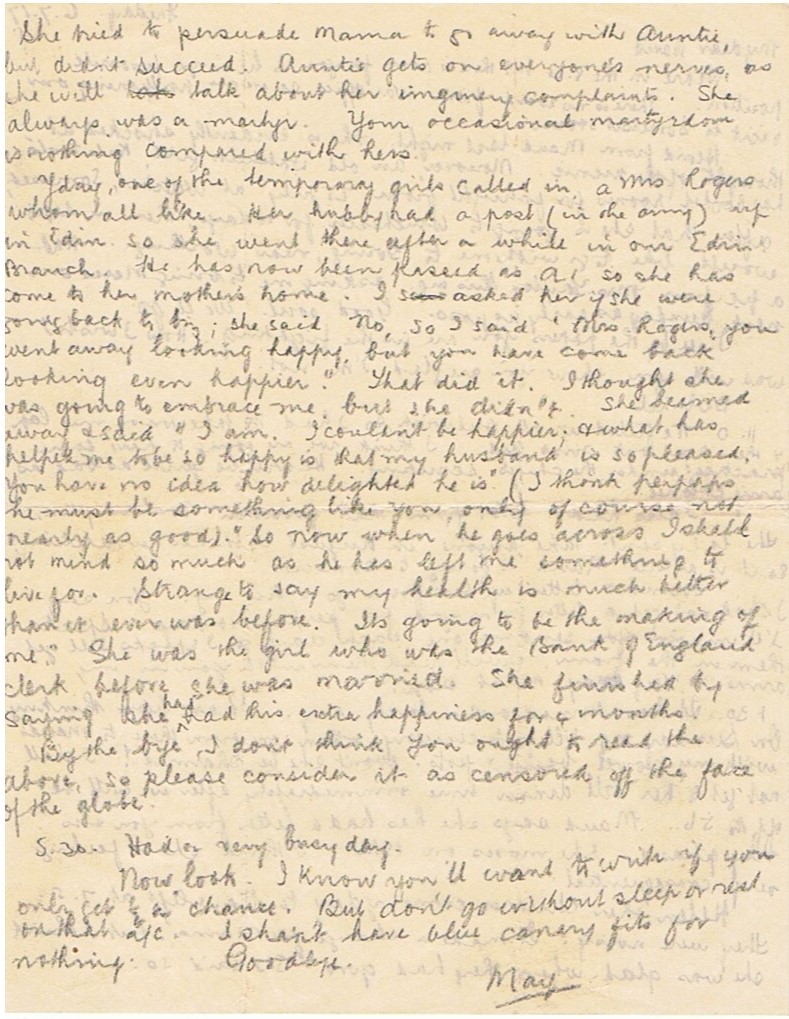 We are on the 8.30 but there is no room for you to lie in your favourite position. There is no word from War Office so we are postponing our visit to Somerset House.

Heard from Maud last night. She is evidently shocked at thoughts of the picnic. Moreover, an old Datchelor girl, Kate Foale has booked rooms for fortnight from 25 July at Watchet, Somerset, after that she is going to Winchester for 10 days; then in Sept would like to go with me to Goring, near Worthing. Had a p.c. from Mrs Taylor this morning asking me to bring Maud over next Sunday as early as possible. Good soul. We’ll go.

I see by the papers you are in the fighting. How I wished I was with you, and how you are glad I’m not.

11.0 We filled up at Dulwich, so I had to take you on my lap and then I got out First Aid. I think we are going to have some practice under the chief’s scrutiny. He will be quite as bad as army colonel.

I also had a letter from that farm in Northampton. The lady can’t take anyone in August as she has her relations, so it as well Maud is going to Somerset.

Found a letter up here from you this morning. You say I shall not get a letter from you for perhaps 10 days. Specks I’ll imagine you send me one each day, and I specks I’ll get them in the train, and will read them with you in my arms. Very bsuy, must stop.

1.30 It has turned out a lovely day. I have been thinking. On Sunday morning I’ll go to cemetery, and then on from there to Maud’s with my trowel, basket and pots. Won’t she be charmed! I shall not get to her till dinner time and immediately after we will be off to 56. Maud says she has had a letter from you and is very pleased. She moves on the 15th. I think she is feeling very consequential.

Helen and her children came yesterday to tea, and left at 7.5. They were noisy. It made a change for Mama, but I think she was glad when they had gone. She said so. She tried to persuade Mama to go away with Auntie, but didn’t succeed. Auntie gets on everyone’s nerves, as she will talk about her imaginary complaints. She always was a martyr. Your occasional martyrdom is nothing compared with hers.

Yesterday one of the temporary girls called in, a Mrs Rogers, whom all like. Her hubby had a post (in the army) up in Edinburgh so she went there after a while in our Edinburgh Branch. He has now been passed as A.1. so she has come to her mother’s home. I asked her if she were going back to Edinburgh; she said No, so I said “Mrs Rogers, you went away looking happy, but you have come back looking even happier.” That did it. I thought she was going to embrace me, but she didn’t. She beamed away and said “I am. I couldn’t be happier; and what has helper me be so happy is that my husband is so pleased. You have no idea how delighted he is” (I think perhaps he must be something like you, only of course not so nearly as good). “So now when he goes across I shall not mind so much as he has left me something to live for. Strange to say my health is much better than it ever was before. Its going to be the making of me.” She was the girl who was the Bank of England clerk before she was married. She finished by saying she had had this extra happiness for 4 months.

By the bye, I don’t think you ought to read the above, so please consider it censored off the face of the globe.

Now look. I know you’ll want to write if you only get ½ a chance. But don’t go without sleep or rest on that account. I shan’t have blue canary fits for nothing.