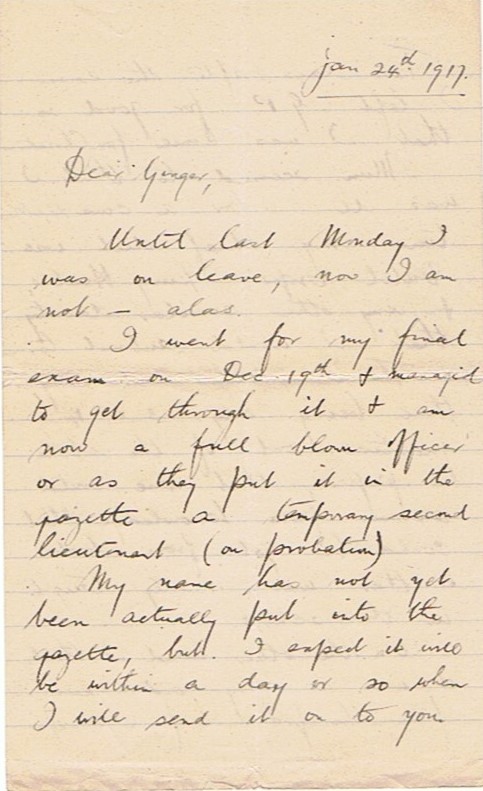 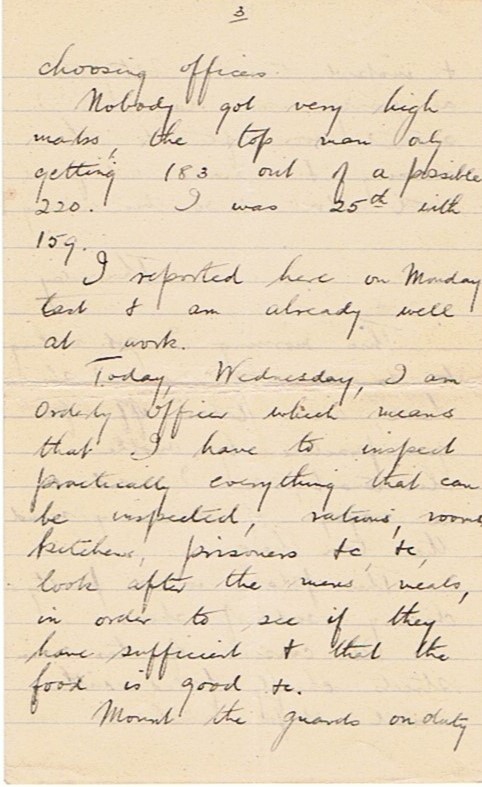 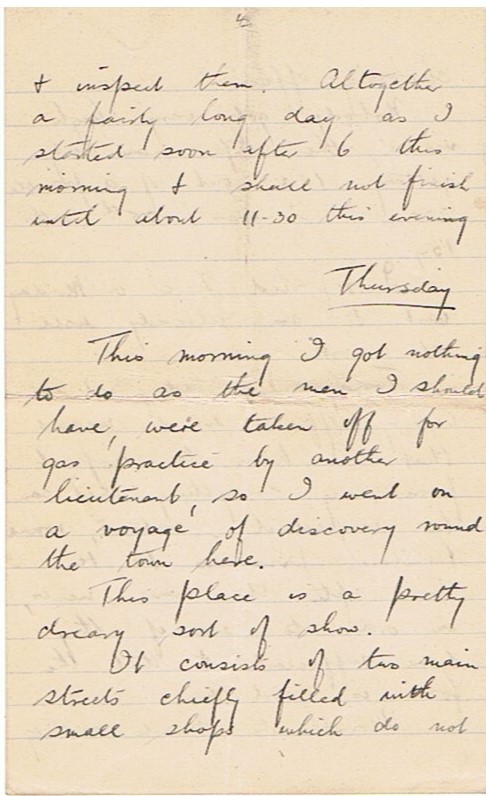 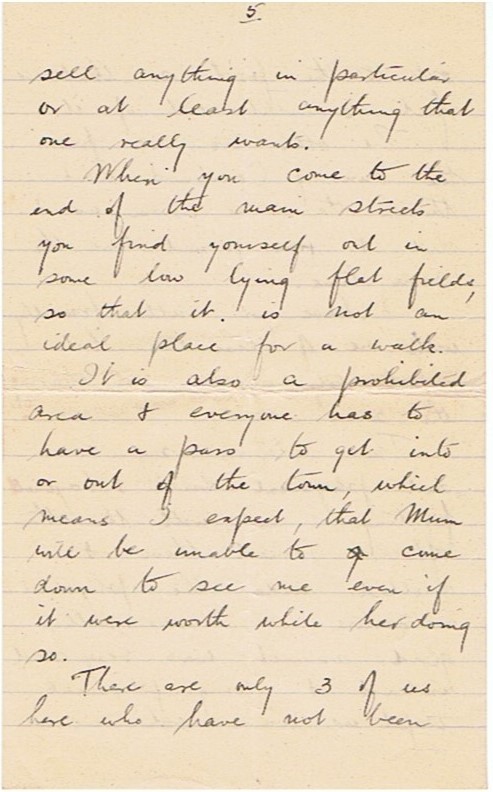 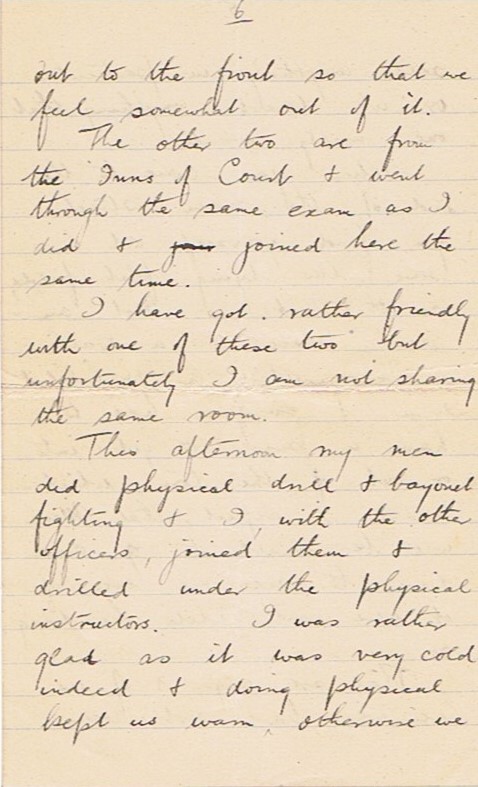 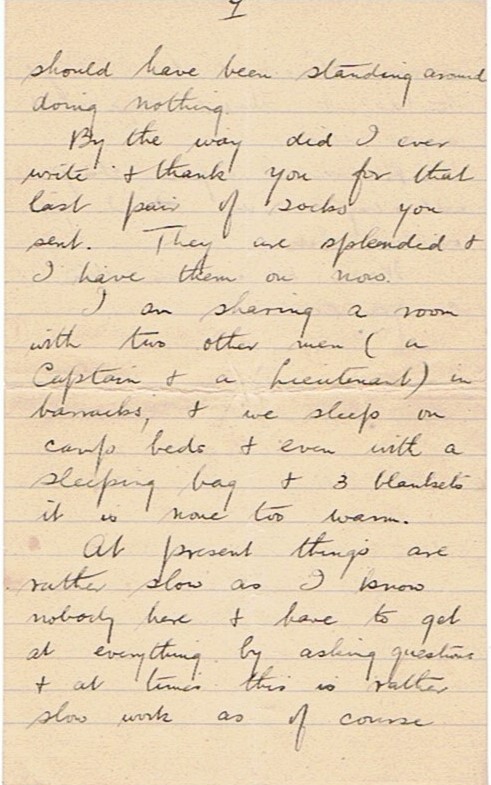 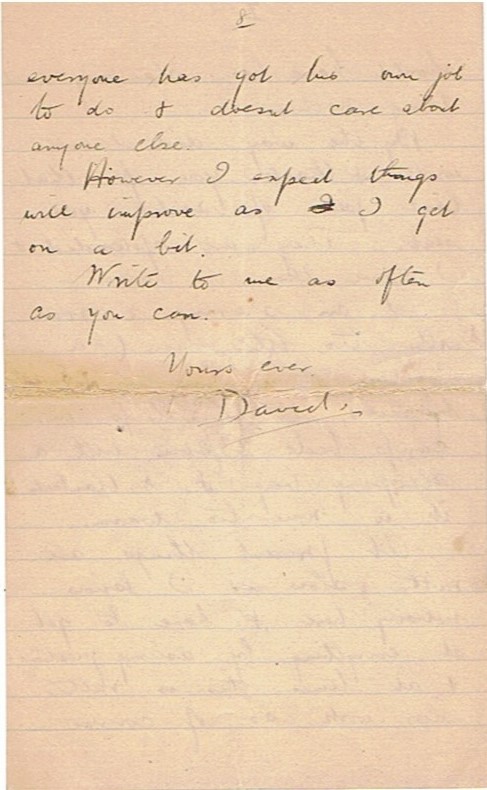 Until last Monday I was on leave, now I am not – alas.

I went for my final exam on Dec 19th and managed to get through it and am now a full blown officer or as they put it in the gazette a temporary second lieutenant (on probation).

My name has not yet been actually put into the gazette, but I expect it will be within a day or so when I will send it on to you.

Two days after the exam I left G.P. for good so that I was home for Christmas.

Mum seemed to think I was ill and for a considerable time my chief diet was Dutch Drops, Lung healers, and any other similar dainty that I would submit to.

The exam was not easy, there being only 3 or 4 questions out of the whole 3 papers that one could answer from knowledge that could be got from books or that was really taught in the school.

On the other hand I think it was a very good exam from the point of view of choosing officers.

I reported here on Monday last and am already well at work.

Today, Wednesday, I am orderly officer which means that I have to inspect practically everything that can be inspected, rations, rooms, kitchens, prisoners, etc etc, look after the men’s meals, in order to see if they have sufficient and that the food is good etc.

Mount the guards on duty and inspect them. Altogether a fairly long day as I started soon after 6 this morning and I shall not finish until about 11.30 this evening.

This morning I got nothing to do as the men I should have were taken off for gas practice by another lieutenant, so I went on a voyage of discovery around the town here.

This place is a pretty dreary sort of show.

It consists of two main streets chiefly filled with small shops which do not sell anything in particular or at least anything that one really wants.

When you come to the end of the main streets you find yourself out in some low lying flat fields, so that it is not an ideal place for a walk.

It is also a prohibited area and everyone has to have a pass to get into or out of the town, which means I expect that Mum will be unable to come down to see me even if it were worth while her doing so.

There are only 3 of us here who have not been out to the front so that we feel somewhat out of it.

The other two are from the Inns of Court and went through the same exam as I did and joined here the same time.

I have got rather friendly with one of these two but unfortunately I am not sharing the same room.

This afternoon my men did physical and bayonet fighting and I, with the other officers, joined them and drilled under the physical instructors. I was rather glad as it was very cold indeed and doing physical kept us warm, otherwise we should have been standing around doing nothing.

By the way did I ever write and thank you for that last pair of socks you sent. They are splendid and I have them on now.

I am sharing a room with two other men (a Captain and a Lieutenant) in barracks, and we sleep on camp beds and even with a sleeping bag and 3 blankets it is none too warm

At present things are rather slow as I know nobody here and have to get at everything by asking questions and at times this is rather slow work as of course everyone has got their own job to do and doesn’t care about anyone else.

However I expect things will improve as I get on a bit.

Write to me as often as you can.