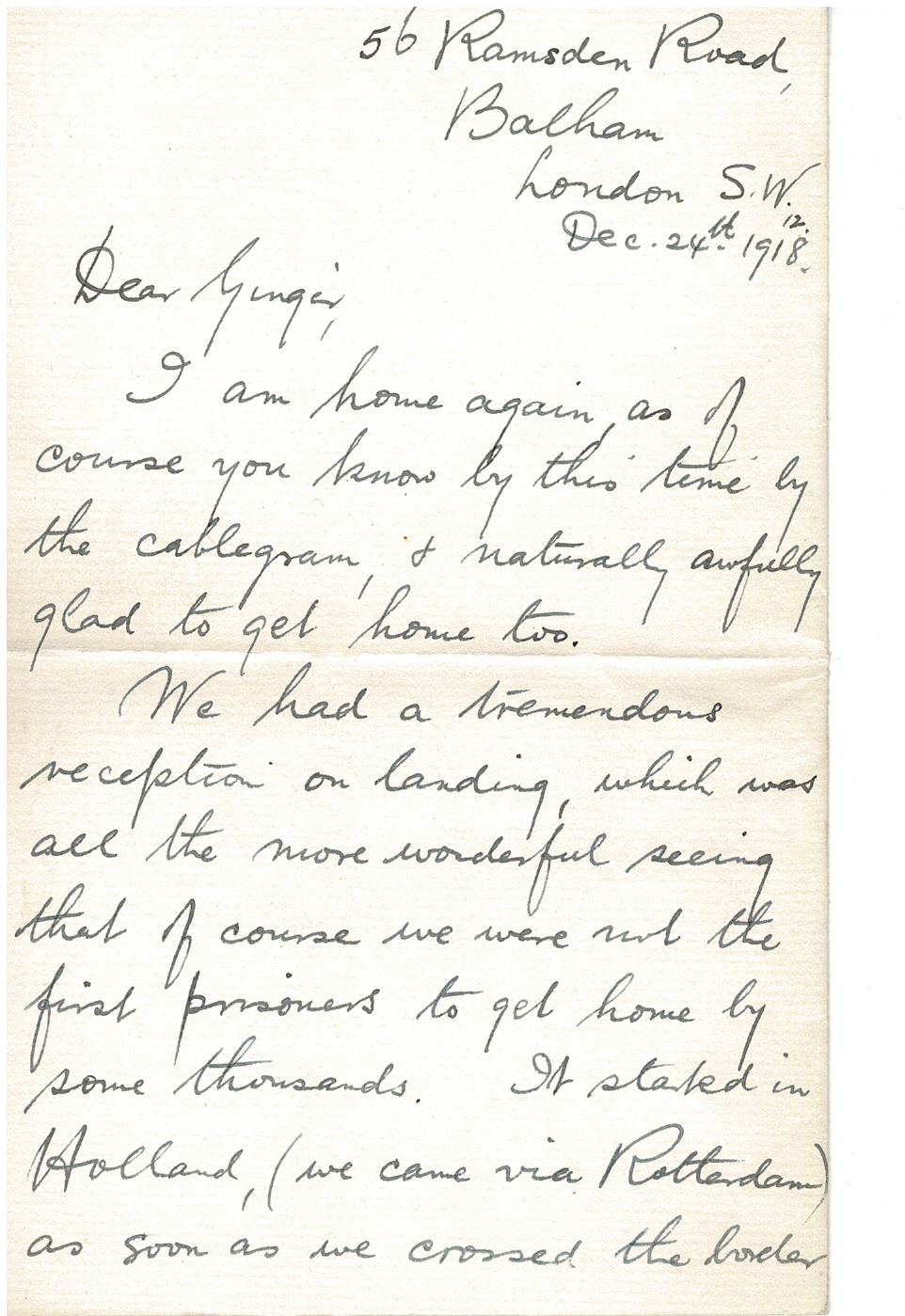 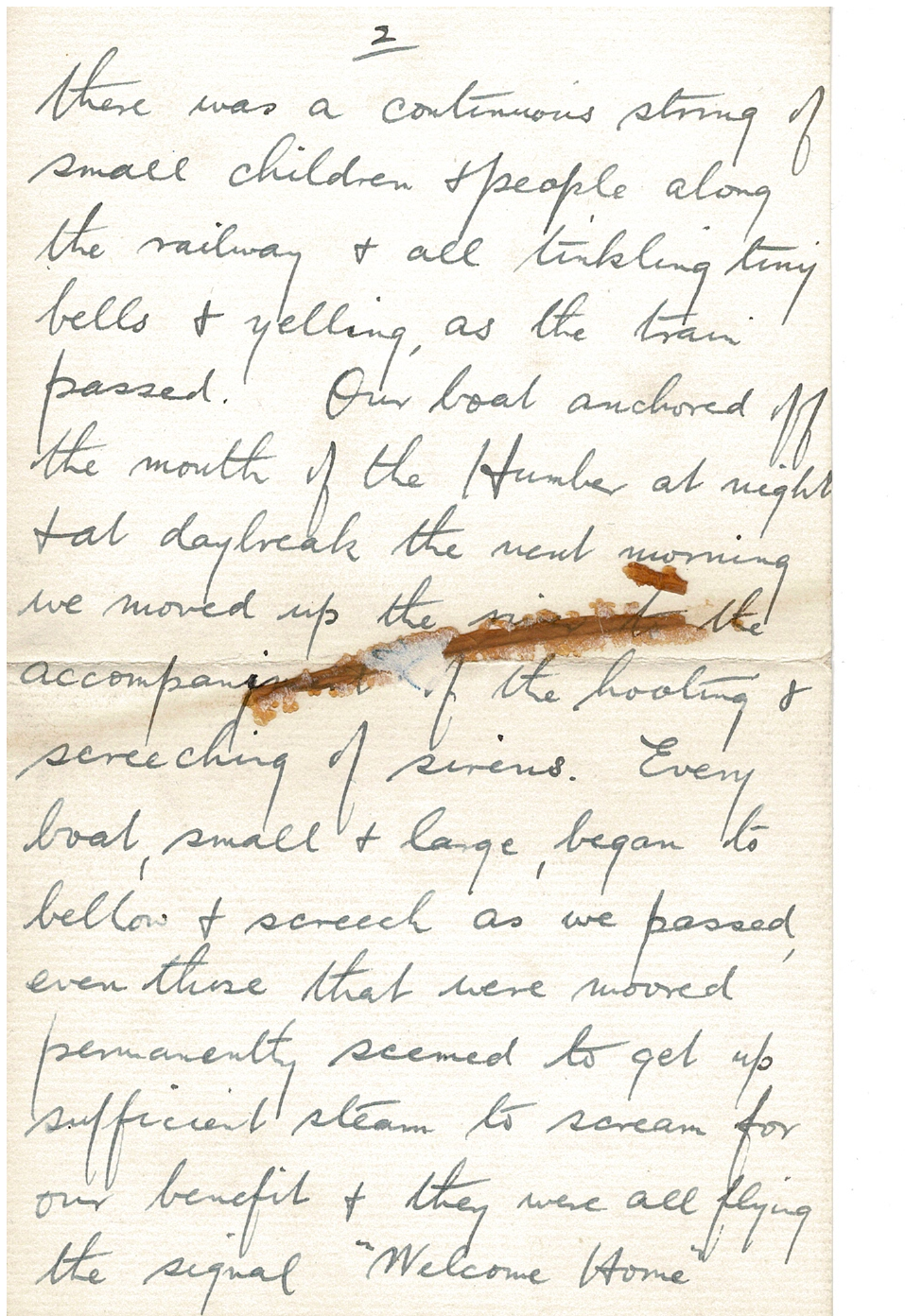 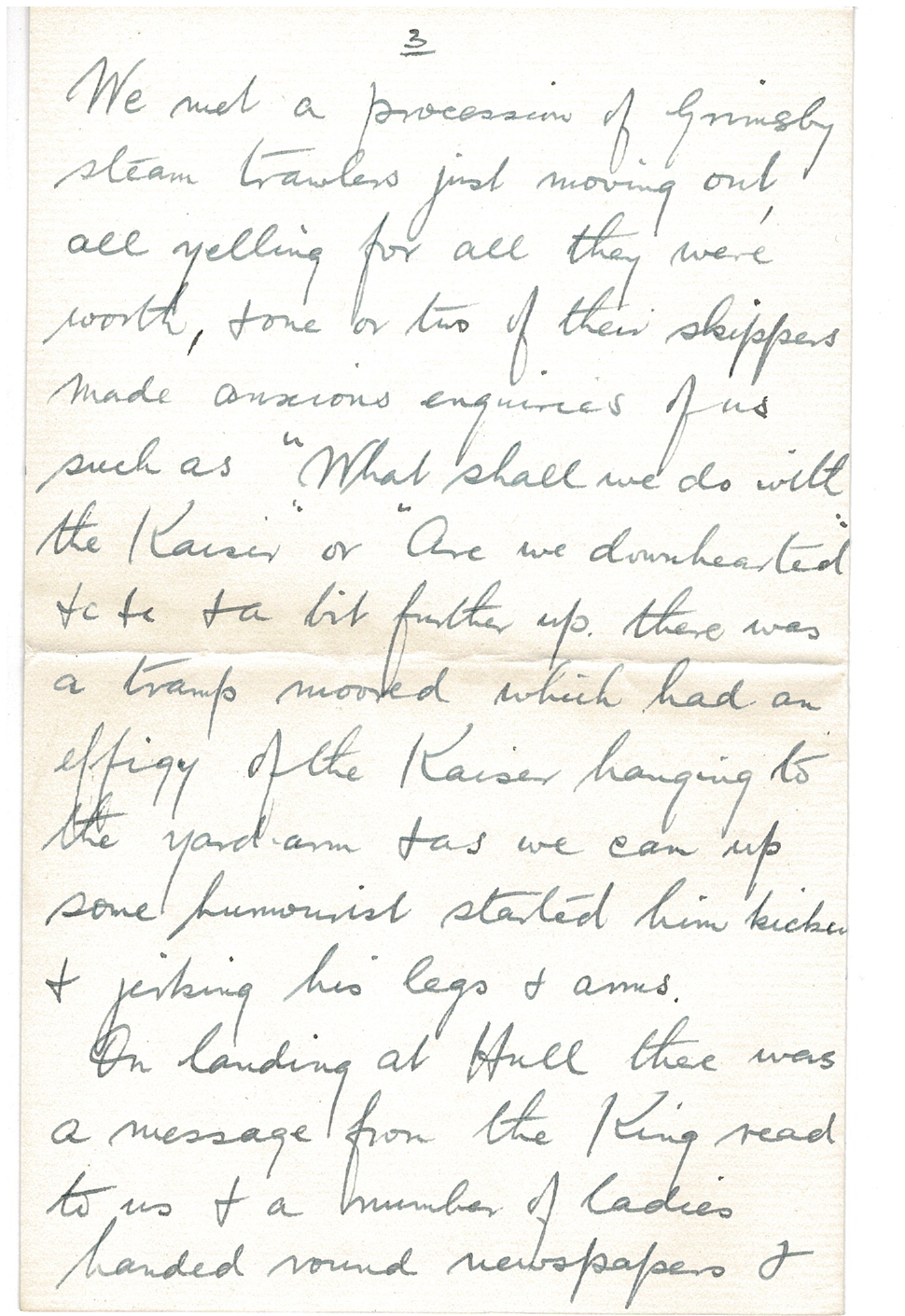 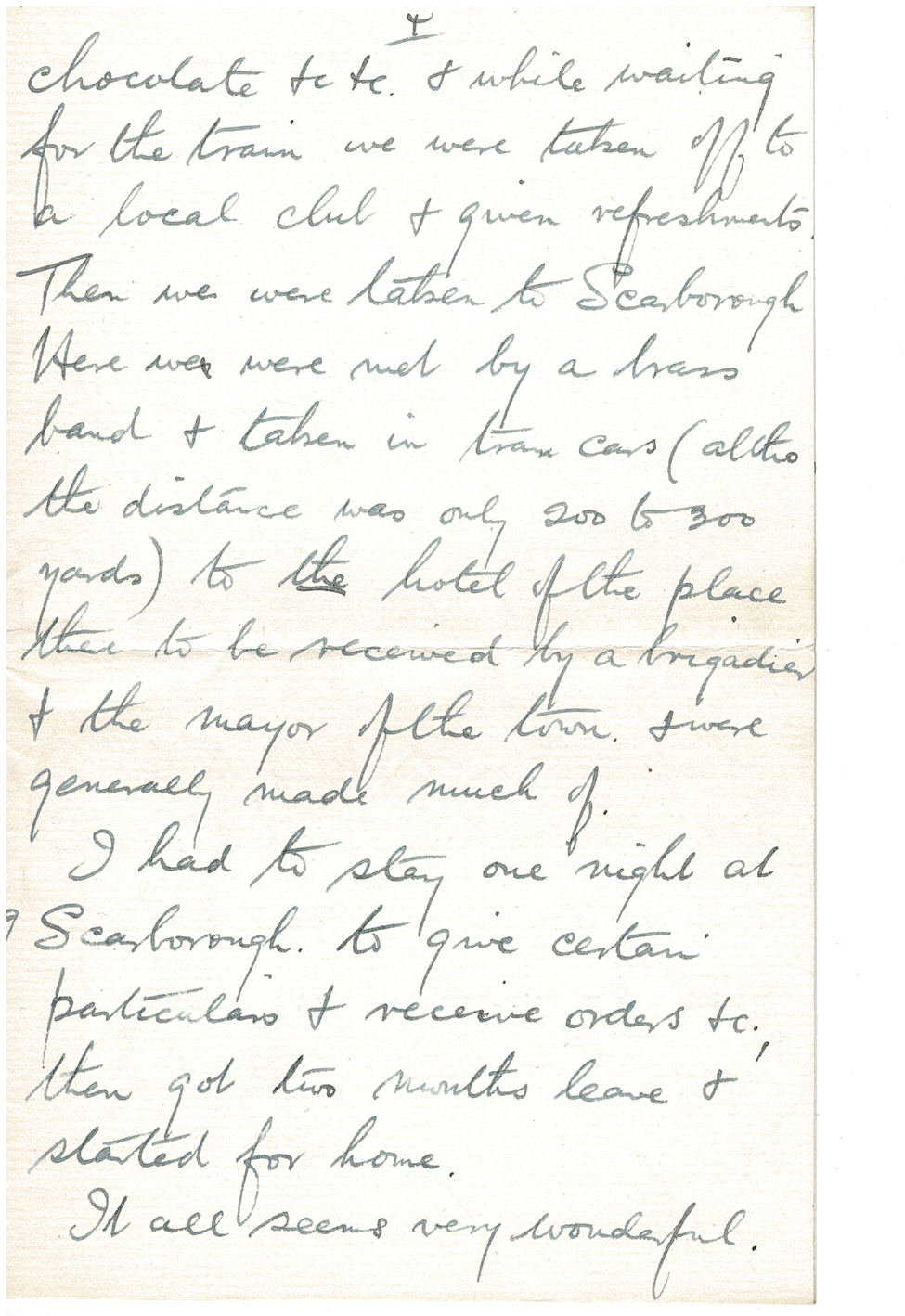 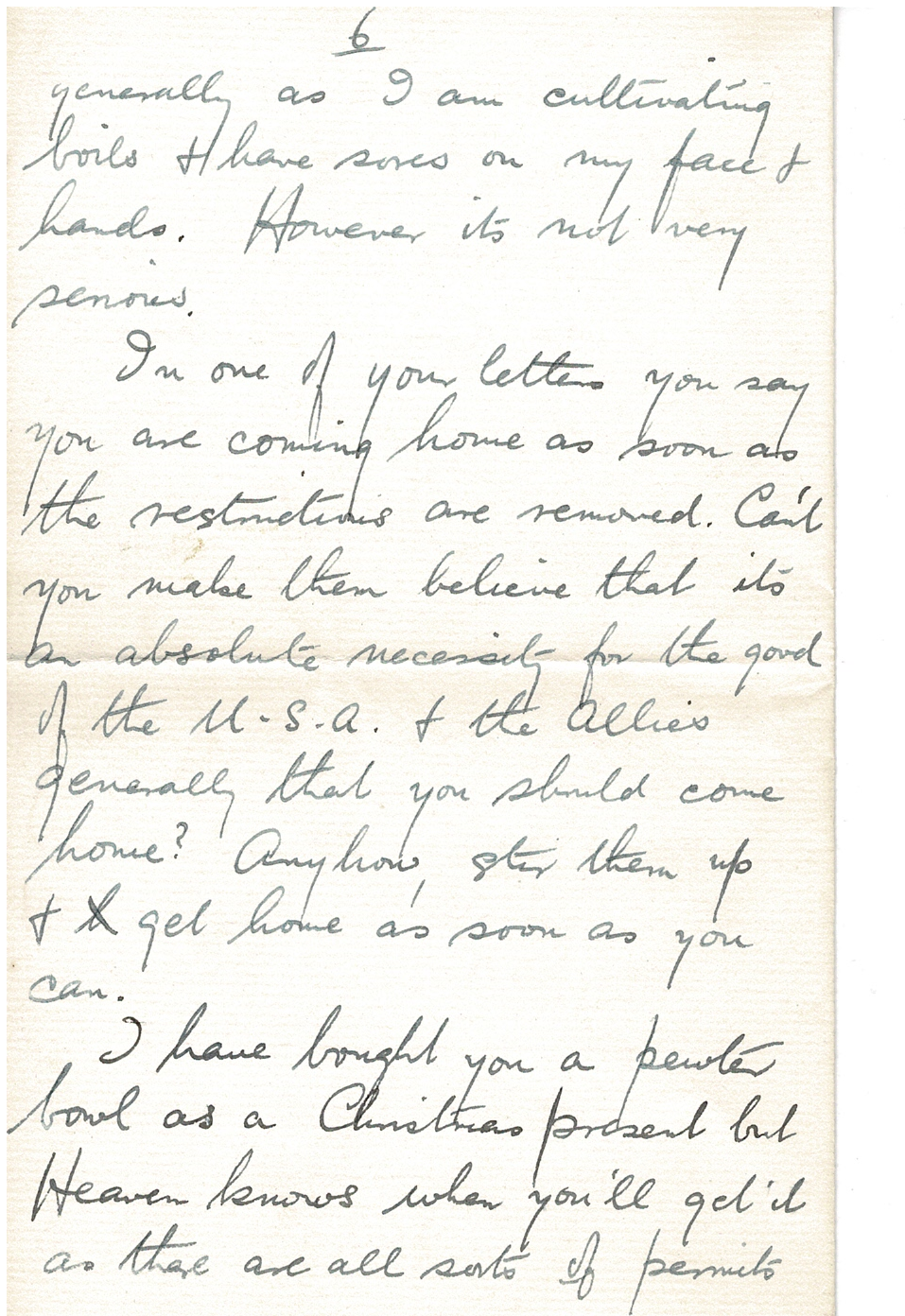 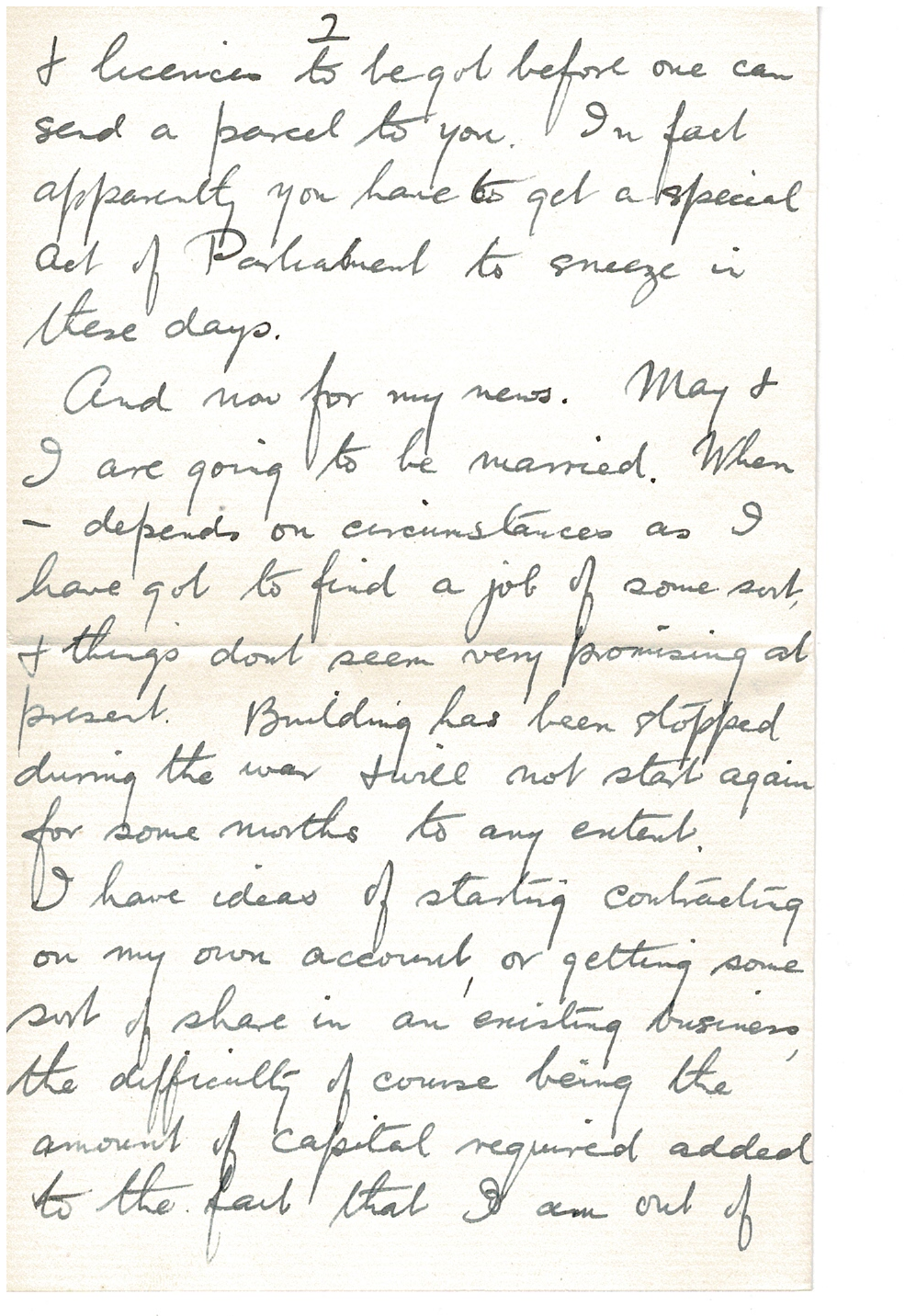 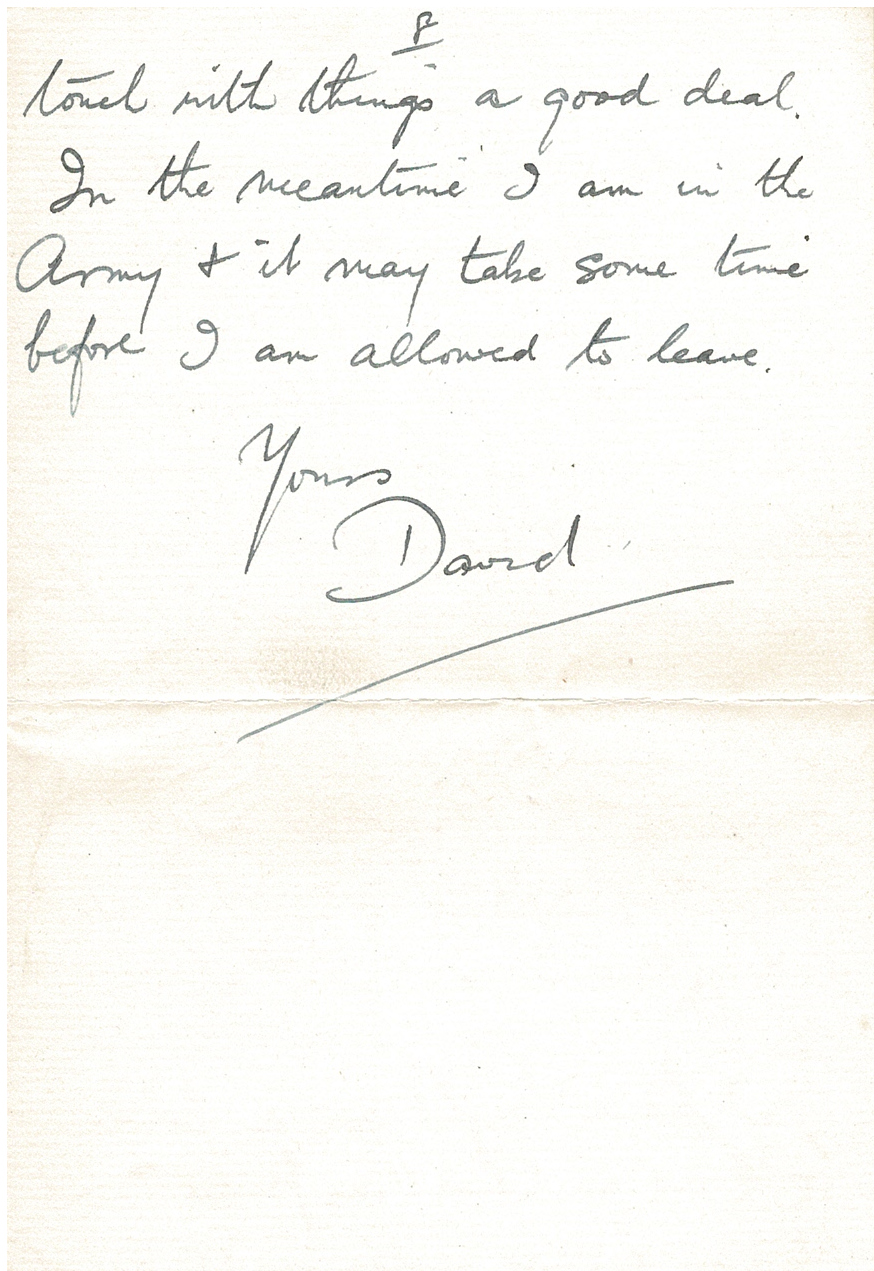 I am home again, as of course you know by this time by the cablegram, & naturally awfully glad to get home too.

We had a tremendous reception on landing, which was all the more wonderful seeing that of course we were not the first prisoners to get home by some thousands. It started in Holland, (we came via Rotterdam) as soon as we crossed the border there was a continuous string of small children & people along the railway & all tinkling tiny bells & yelling, as the train passed. Our boat anchored off the mouth of the Humber at night & at daybreak the next morning we moved up the river to the accompaniment of the hooting & screeching of sirens. Every boat, small and large, began to bellow & screech as we passed, even those that were moored permanently seemed to get up sufficient steam to scream for our benefit & they were all flying the signal “Welcome Home”. We met a procession of Grimsby steam trawlers just moving out, all yelling for all they were worth, & one of two of their skippers made anxious enquiries of us such as “What shall we do with the Kaiser” or “Are we downhearted” etc etc & a bit further up there was a tramp moored which had an effigy of the Kaiser hanging to the yardarm & as we came up some humorist started him kicking & jerking his legs & arms.

On landing at Hull there was a message from the King read to us & a number of ladies handed round newspapers & chocolate etc etc & while waiting for the train we were taken off to a local club & given refreshments. Then we were taken to Scarborough. Here we were met by a brass band & taken in tram cars (altho’ the distance was only 200 to 300 yards) to the hotel of the place there to be received by a brigadier & the mayor of the town & were generally made much of.

I had to stay one night at Scarborough to give certain particulars & receive orders etc, then got two months leave & started for home.

It all seems very wonderful.

Here in London people seem willing to do anything for you if you are in khaki.

For instance, I went to see Mr Charrington to thank him & as I was not sure of his number I was looking in a various doorways. When a man asked what name I wanted & as he couldn’t direct me, took me up into his own office & looked up the address in the directory, all entirely without being asked, & this sort of feeling seems to be general.

I have not been specially well since I have been home, I think I had a slight touch of the “flu” & I seem rather off colour generally as I am cultivating boils & have sores on my face & hands. However its not very serious.

In one of your letters you say you are coming home as soon as the restrictions are removed. Can’t you make them believe that its an absolute necessity for the good of the USA & the Allies generally that you should come home? Anyhow, stir them up & get home as soon as you can.

I have bought you a pewter bowl as a Christmas present but Heaven knows when you’ll get it as there are all sorts of permits & licences to be got before one can send a parcel to you. In fact apparently you have to get a special Act of Parliament to sneeze in these days.

And now for my news. May & I are going to be married. When – depends on circumstances as I have got to find a job of some sort, & things dont seem very promising at present. Building has been stopped during the war & will not start again for some months to any extent.

I have ideas of starting contracting on my own account, or getting some sort of share in an existing business, the difficulty of course being the amount of capital required added to the fact that I am out of touch with things a good deal. In the meantime I am in the Army & it may take some time before I am allowed to leave.