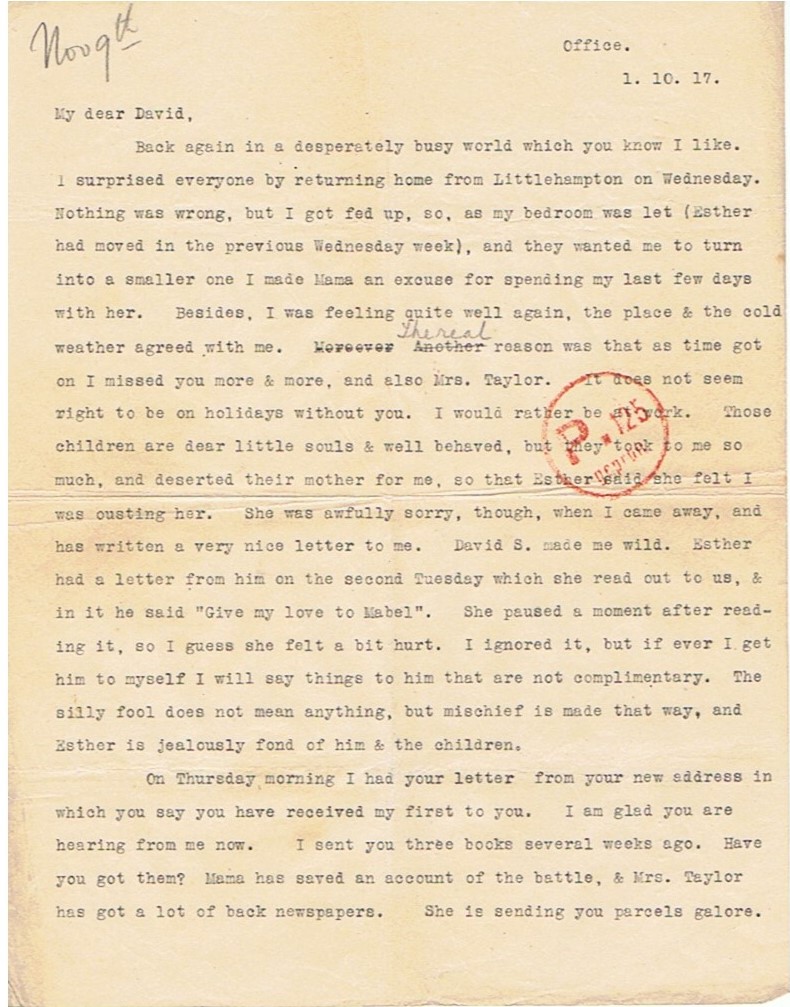 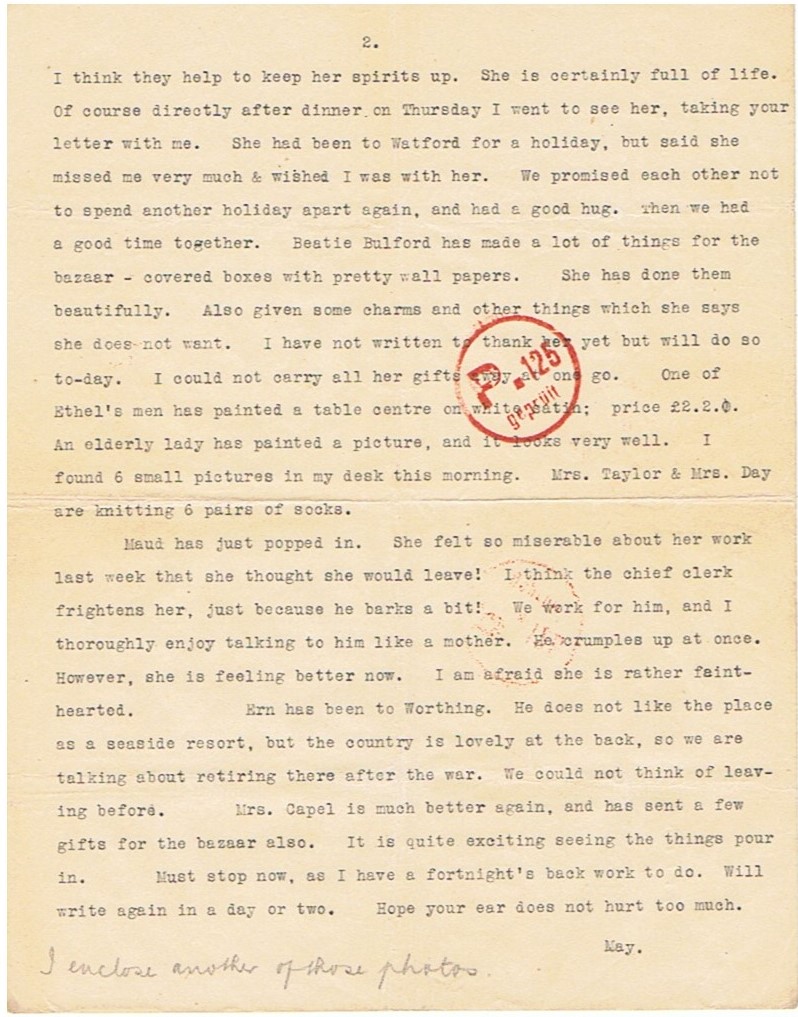 Back again in a desperately busy world which you know I like. I surprised everyone by returning home from Littlehampton on Wednesday. Nothing was wrong, but I got fed up, so, as my bedroom was let (Esther had moved in the previous Wednesday week), and they wanted me to turn into a smaller one I made Mama an excuse for spending my last few days with her. Besides, I was feeling quite well again, the place and the cold weather agreed with me. The real reason was that as time got on I missed you more & more, and also Mrs. Taylor. It does not seem right to be on holidays without you. I would rather be at work. Those children are dear little souls and well behaved, but they took to me so much, and deserted their mother for me, so that Esther felt I was ousting her. She was awfully sorry, though, when I came away, and has written a very nice letter to me. David S. made me wild. Esther had a letter from him on the second Tuesday which she read out to us, and in it he said “Give my love to Mabel”. She paused a moment after reading it, so I guess she felt a bit hurt. I ignored it, but if ever I get him to myself I will say things to him that are not complimentary. The silly fool does not mean anything, but mischief is made that way, and Esther is jealously fond of him and the children.

On Thursday morning I had your letter from your new address in which you say you have received my first to you. I am glad you are hearing from me now. I sent you three books several weeks ago. Have you got them? Mama has saved an account of the battle, and Mrs. Taylor has got a lot of back newspapers. She is sending you parcels galore. I think they help to keep her spirits up. She is certainly full of life. Of course directly after dinner on Thursday I went to see her, taking your letter with me. She had been to Watford for a holiday, but said she missed me very much and wished I was with her. We promised each other not to spend another holiday apart again, and had a good hug.  Then we had a good time together. Beatie Bulford has made a lot of things for the bazaar – covered boxes with pretty wall papers. She has done them beautifully. Also given some charms and other things she says she does not want. I have not written to thank her yet but will do so today. I could not carry all her gifts away at one go. One of Ethel’s men has painted a table centre on white satin; price £2.2.0. An elderly lady has painted a picture, and it looks very well. I found 6 small pictures in my desk this morning. Mrs. Taylor and Mrs. Day are knitting 6 pairs of socks.

Maud has just popped in. She felt so miserable about her work last week that she thought she would leave! I think the chief clerk frightens her, just because he barks a bit! We work for him, and I thoroughly enjoy talking to him like a mother. He crumples up at once. However, she is feeling better now. I am afraid she is rather faint- hearted.

Ern has been to Worthing. He does not like the place as a seaside resort, but the country is lovely at the back, so we are talking about retiring there after the war. We could not think of leaving before. Mrs. Capel is much better again, and has sent a few gifts for the bazaar also. It is quite exciting seeing the things pour in.

Must stop now, as I have a fortnight’s back work to do. Will write again in a day or two. Hope your ear does not hurt too much.

I enclose another of those photos.