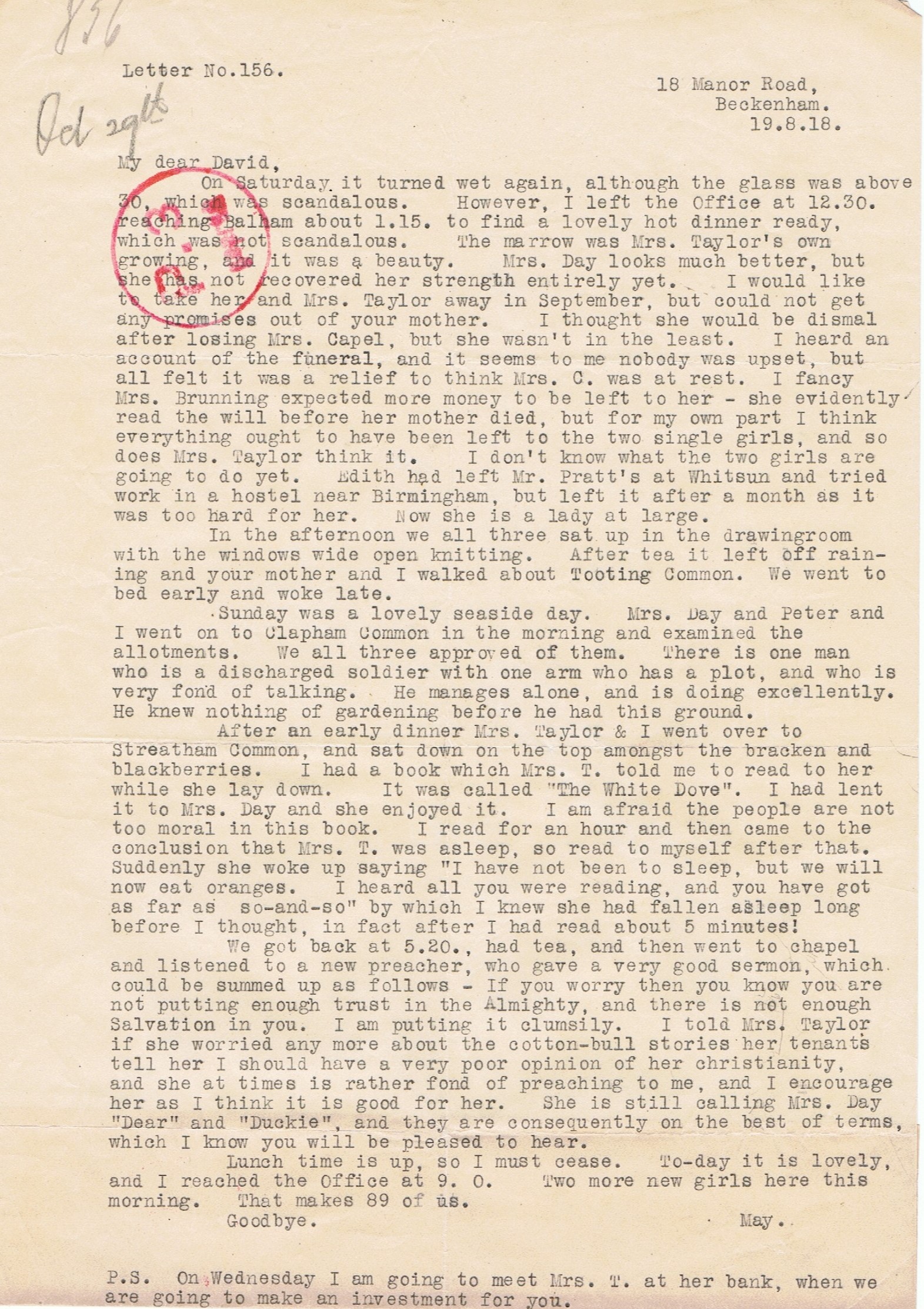 May to David Beckenham Letter No 156 19.8.18
My dear David,
On Saturday it turned wet again, although the glass was above 30, which was scandalous. However, I left the Office at 12.30 reaching Balham about 1.15 to find a lovely hot dinner ready, which was not scandalous. The marrow was Mrs Taylor’s own growing, and it was a beauty. Mrs Day looks much better, but she has not recovered her strength entirely yet. I would like to take her and Mrs Taylor away in September, but could not get any promises out of your mother. I thought she would be dismal after losing Mrs Capel, but she wasn’t in the least. I heard an account of the funeral, and it seems to me nobody was upset, but all felt it was a relief to think Mrs C was at rest. I fancy Mrs Brunning expected more money to be left to her – she evidently read the will before her mother died, but for my own part I think everything ought to have been left to the two single girls, and so does Mrs Taylor think it. I don’t know what the two girls are going to do yet. Edith had left Mr Pratt’s at Whitsun and tried to work in a hostel near Birmingham, but left it after a month as it was too hard for her. Now she is a lady at large.
In the afternoon we all three sat up in the drawing room with the windows wide open knitting. After tea it left off raining and your mother and I walked about Tooting Common. We went to bed early and woke late.
Sunday was a lovely seaside day. Mrs Day and Peter and I went to Clapham Common in the morning and examined the allotments. We all three approved of them. There is one man who is a discharged soldier with one arm who has a plot, and who is very fond of talking. He manages alone, and is doing excellently. He knew nothing of gardening before he had this ground.
After an early dinner Mrs Taylor & I went over to Streatham Common, and sat down on the top amongst the bracken and blackberries. I had a book which Mrs Taylor told me to read to her while she lay down. It was called “The White Dove”. I had lent it to Mrs Day and she enjoyed it. I am afraid the people are not too moral in this book. I read for an hour and then came to the conclusion that Mrs T was asleep, so read to myself after that. Suddenly she woke up saying “I have not been asleep, but we will now eat oranges. I heard all you were reading, and you have got as far as so-and-so” by which I knew she had fallen asleep long before I thought, in fact after I had read about 5 minutes!
We got back at 5.20, had tea, and then went to chapel and listened to a new preacher, who gave a very good sermon, which could be summed up as follows – If you worry then you know you are not putting enough trust in the Almighty, and there is not enough Salvation in you. I am putting it clumsily. I told Mrs Taylor if she worried any more about the cotton-bull stories her tenants tell her I should have a very poor opinion of her christianity, and she at times is rather fond of preaching to me, and I encourage her as I think it is good for her. She is still calling Mrs Day “Dear” and “Duckie”, and they are consequently on the best of terms, which I know you will be pleased to hear.
Lunch time is up, so I must cease. To-day it is lovely, and I reached the Office at 9.0. Two more new girls here this morning. That makes 89 of us.
Goodbye.
May
PS On Wednesday I am going to meet Mrs T at her bank, when we are going to make an investment for you.