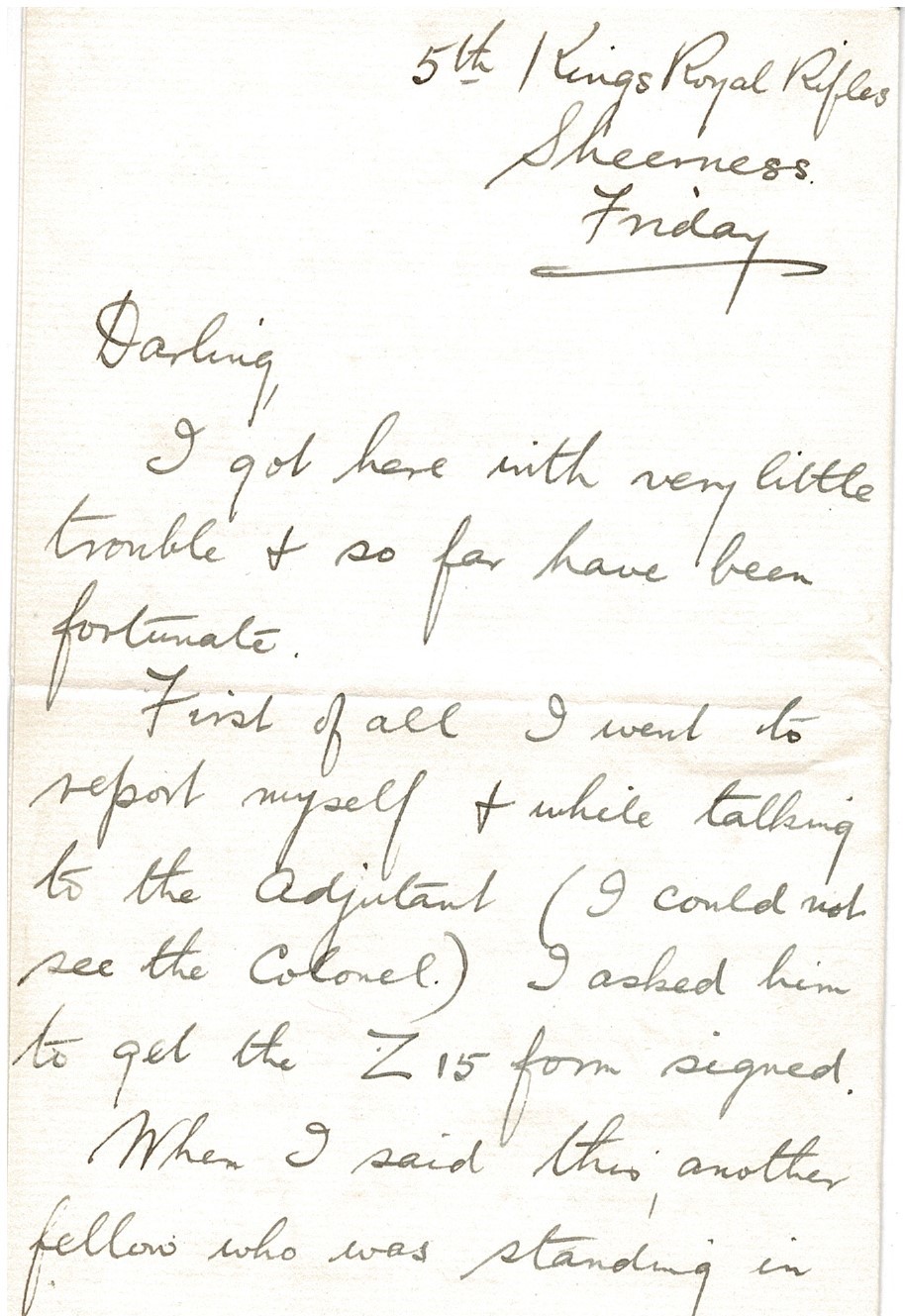 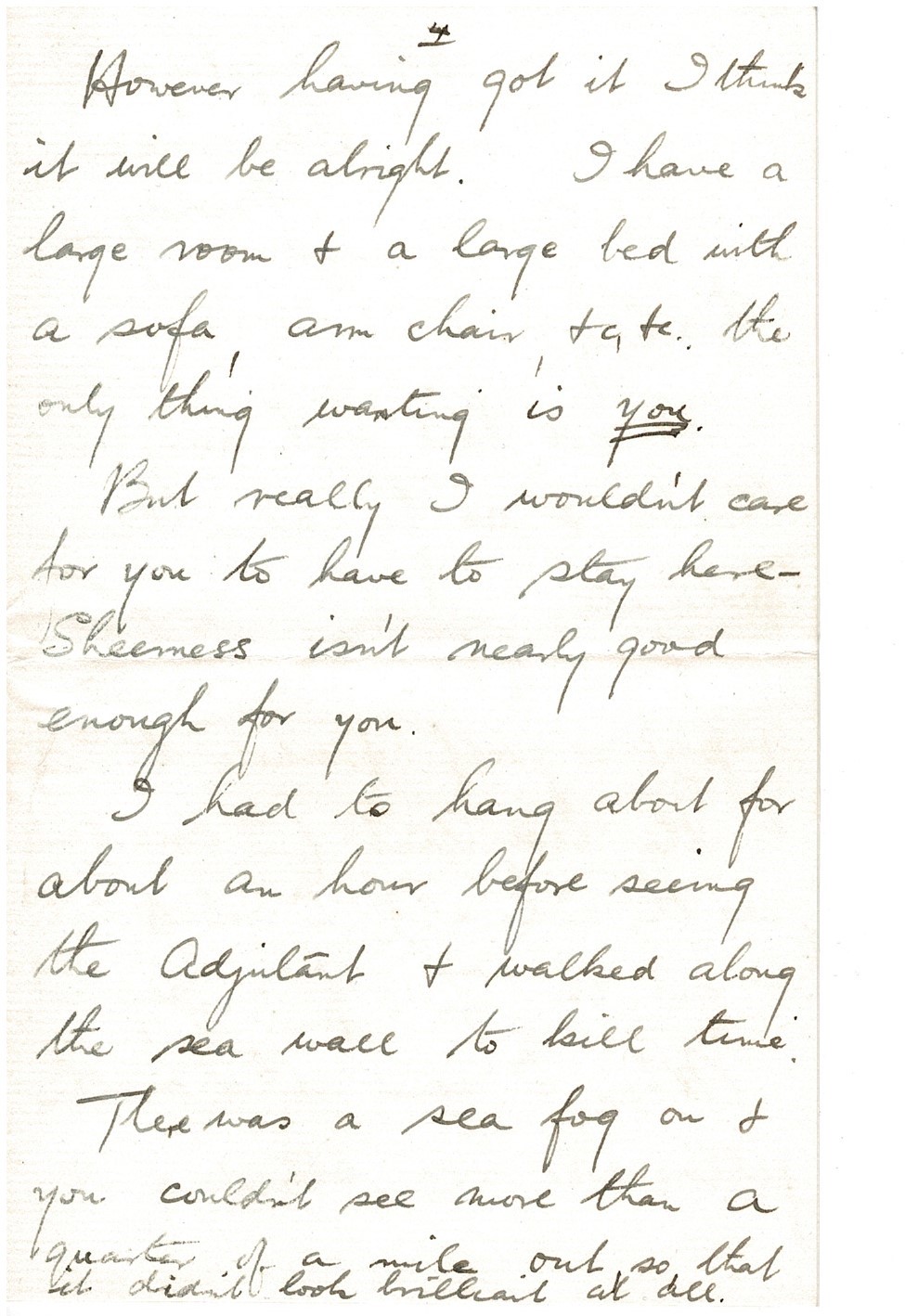 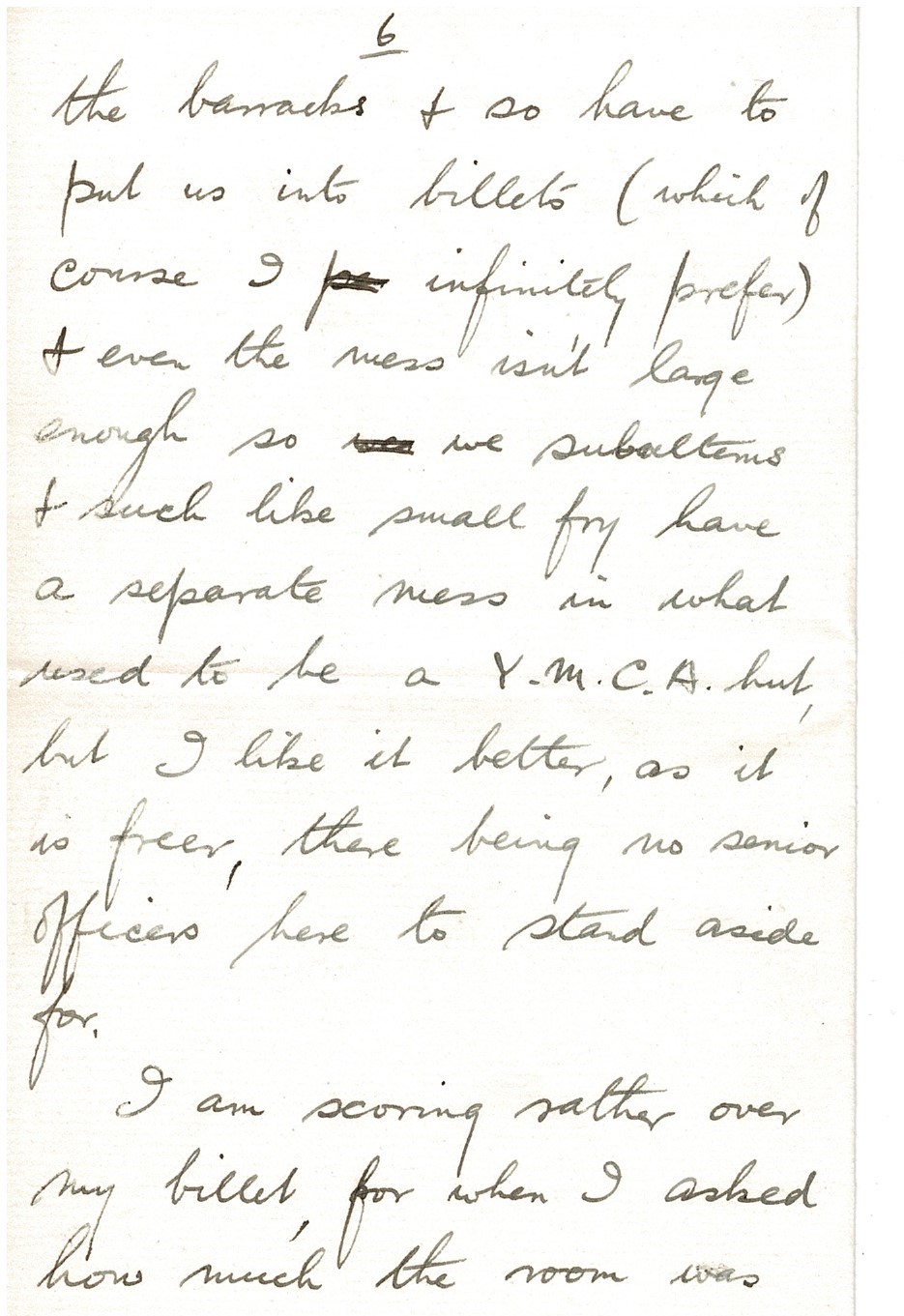 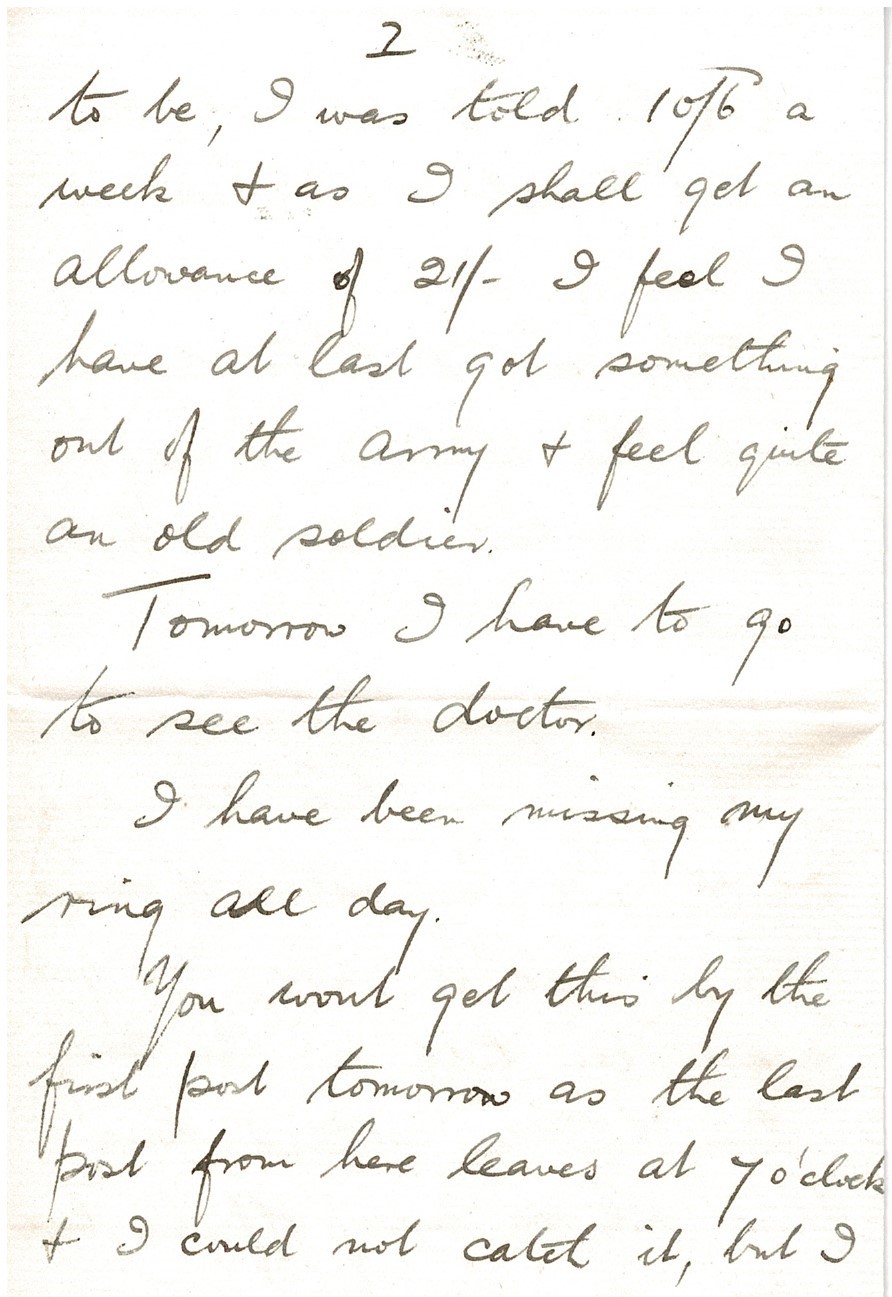 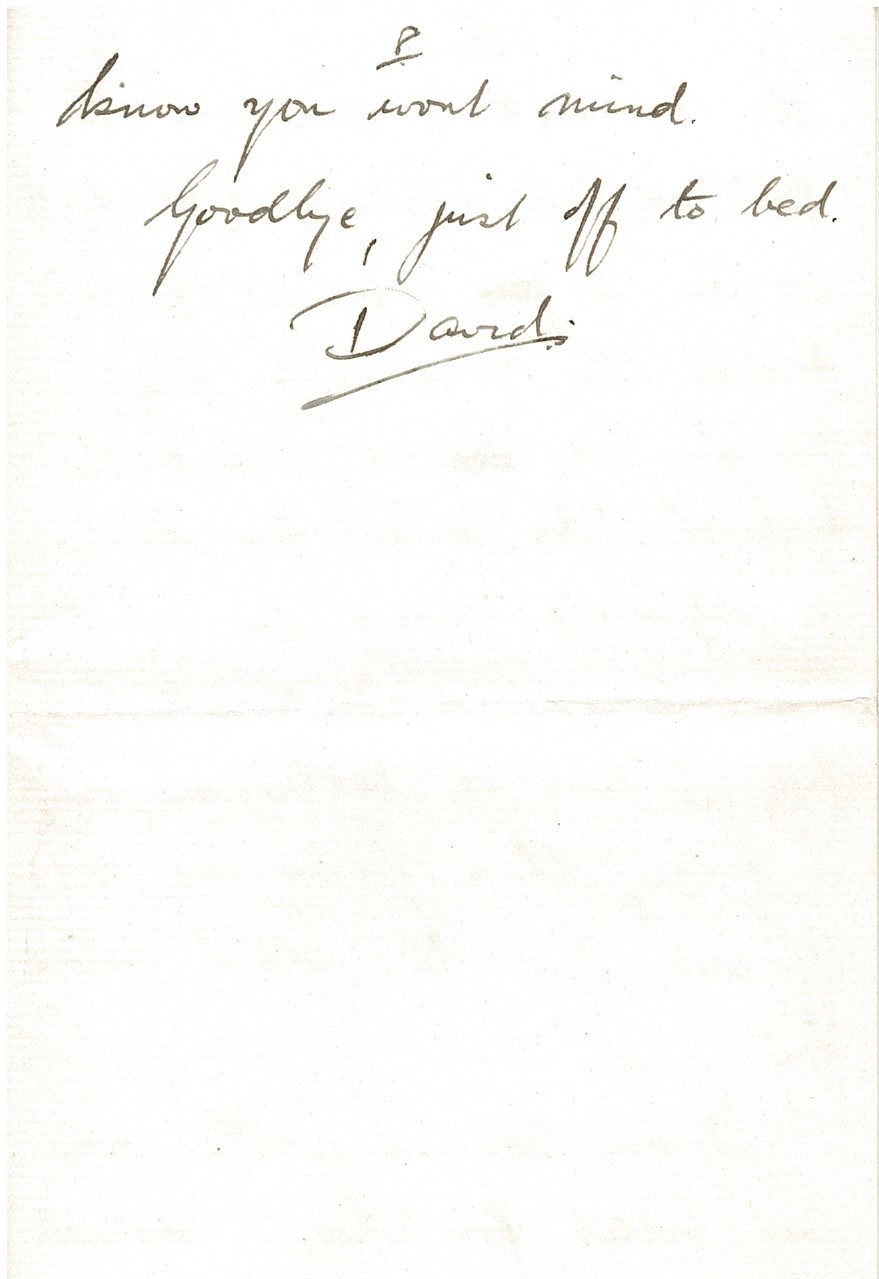 I got here with very little trouble & so far have been fortunate.

First of all I went to report myself & while Talking to the Adjutant (I could not see the Colonel) I asked him to get the Z15 form signed.

When I said this, another fellow in the room asked what I was & on my saying an Architect & Surveyor he replied that there was no need to fill in the form, but that he could fix things up for me.

He turned out to be the demobilisation officer & took me along to his office & put me down on the list straight away.

The only thing that might upset things he said, was the fact that I did not join the Artists until February 1916 but he said he thought the fact that I was in the OTC in 1915 would put things right.

He also said that if things went well I should get out in a week, that is if the Colonel gives his sanction, & this is quite possible, as there are more officers here than they know what to do with.

After that I went to look for a billet. I was given a list of six names & went to all the lot before I found one that could take me. However having got it I think it will be alright. I have a large room & a large bed with a sofa, arm chair etc etc, the only thing wanting is you.

But really I wouldn’t care for you to stay here – Sheerness isn’t nearly good enough for you.

I had to hang about for about an hour before seeing the Adjutant & walked along the sea wall to kill time.

There was a sea fog on & you couldn’t see more than a quarter of a mile out so that it didn’t look brilliant at all.

As far as I can tell there is not much doing here in the way of work.

There seemed to be nobody about this afternoon & everybody apparently had gone to a football match.

Having gone to all the trouble of bringing my bed down here together with my valise of course I don’t need it now, but you never can tell in the Army.

Everything is altered here, there are so many officers that they haven’t room in the barracks & so have to put us into billets (which of course I infinitely prefer) & even the mess isn’t large enough so we subalterns & such like small fry have a separate mess in what used to be a YMCA hut, but I like it better, as it is freer, there being no senior officers here to stand aside for.

I am scoring rather over my billet, for when I asked how much the room was to be, I was told 10/6 a week & as I shall get an allowance of 21/- I feel I have at last got something out of the Army & feel quite an old soldier.

Tomorrow I have to go to see the doctor.

I have been missing my ring all day.

You wont get this by the first post tomorrow as the last post leaves here at 7 o’clock & I could not catch it, but I know you wont mind.

Goodbye, just off to bed.